Is Gold Still A Good Investment?

“Gold bugs” came into 2018 hopeful that this would be a comeback year.

What followed was a year of defeat. Gold fell nearly 6%.

The talking heads threw out a host of reasons for falling gold prices.

A far-fetched theory was gold’s weakness from the rise of cryptocurrencies.

Bitcoin and other crypto coins were lauded as the end of the gold investments.

Many crypto speculators called for the end of gold’s millennia reign. Offered as a replacement were internet-issued coins — most “minted” in the last year.

Gold has a heft to it. The yellow metal never tarnishes. Most of the gold ever mined is still held. Even coins lost from shipwrecks are still just as valuable today. Gold is literally a solid investment.

In contrast, cryptos are far less secure. Roughly 20% of all the bitcoins “mined” are thought to be lost — forever. That’s according to research from Chainalysis, a digital forensic firm.

Even worse is the rampant theft from hackers. An estimated $1.1 billion in cryptocurrencies were stolen in the first half of this year.

Cryptos don’t check the “safe-haven asset” box like gold does.

A stronger dollar is seen as the main culprit of gold’s decline. It advanced over 5% against an index of other currencies in the last year.

Commodities suffer under a strong dollar.

Resources like base and precious metals, energy and most soft commodities are priced in U.S. dollars. Strength in the dollar makes them costlier for other countries.

A strengthening dollar is a sign of investor confidence in the U.S.

This confidence suggests an optimistic outlook on the economy, which isn’t ideal for gold investments.

Hedge funds built a record short position in gold. The funds bet that the economy would continue to grow, and that gold has further to fall. 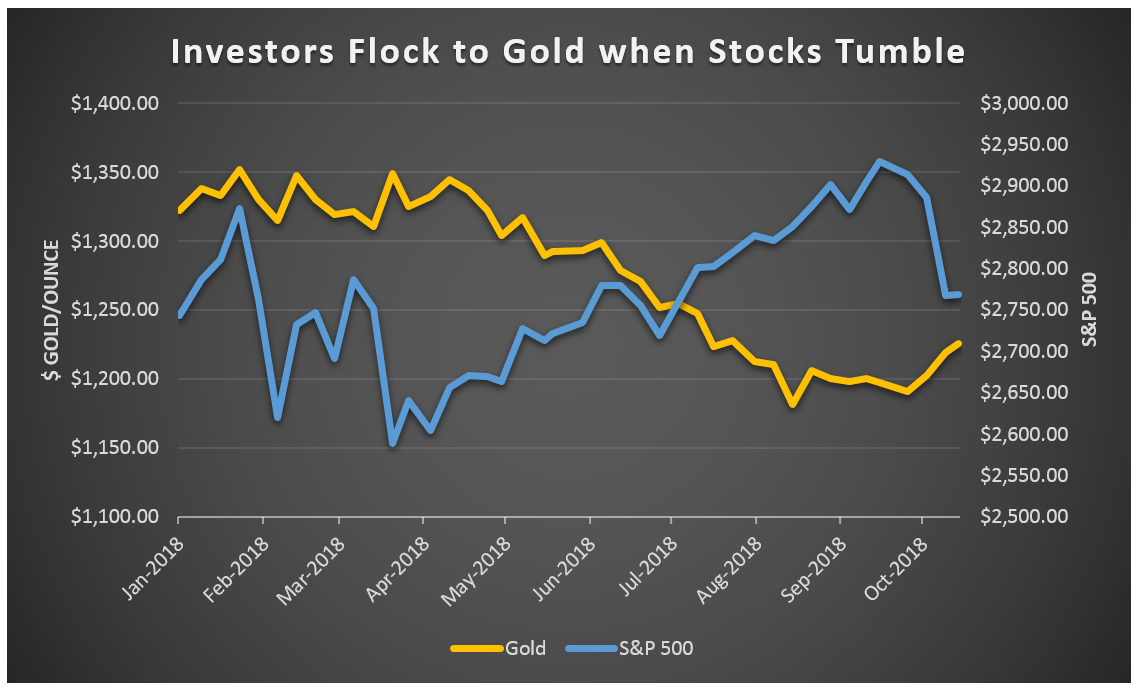 Their confidence may be wavering after the sell-off earlier this month.

Even Treasuries saw a sell-off.

But gold had an influx of capital. The price picked up roughly 3%.

U.S. equities are looking to shore up their footing after stocks’ stumble.

A Hedge Against Market Turmoil

Even in the later stages of this economic boom, we will continue to see growth.

Yet the fear of a market crash is likely to stabilize gold’s value.

If a slowdown in growth causes a major market sell-off, gold will be one of the best safe havens to be in.

Think of gold as a hedge against market turmoil. During the best times, it won’t outperform equities. But during the worst times, it will protect your buying power for when you are ready to invest again.

These funds allow investors to put money into gold without having to worry about storage fees. The Sprott Physical Gold Trust is redeemable for physical gold.

Is Gold Warning Us About A Future Market Drop?

Gold Is Your Insurance Against a Market Crash