The Worry Over Interest Rates Is Overblown

There’s been a lot of talk over the last month that rising interest rates are wreaking havoc on the market.

Don’t let the headlines fool you.

Interest rates have been rising for over two years now, and that’s likely coming to an end soon.

While I agree with the consensus that rising rates are bad for the economy, the immediate effect isn’t always as dire.

The chart below proves it.

Below is a chart with the S&P 500 Index (in blue). The effective overnight fed funds rate is in orange. That’s what everyone is referring to when they talk about rising rates. 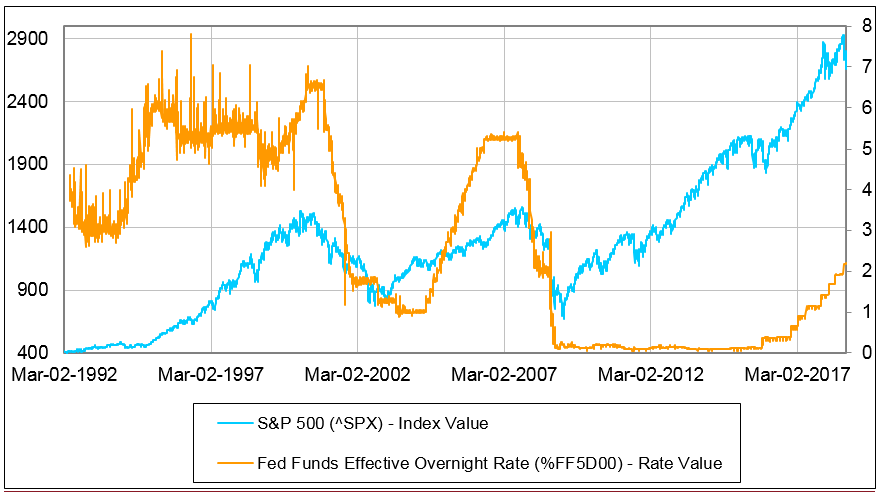 In the chart, you can see clearly that during periods where interest rates are rising, like in the early ‘90s, the mid-2000s and the past few years, the S&P 500 can still climb while rates are going up.

Yet as rates steadily rise at the moment, market watchers are fretting over another collapse.

There will eventually be another collapse in the stock market, and rising rates will be the main culprit.

But as the past three interest-rate hike cycles are an example of, the crash doesn’t happen right away.

It takes time for the effects of rising rates to make their way through the housing market, corporate debt markets and our economy.

That’s why now isn’t the time to panic over interest rates.

Instead, use this headline-driven fear to buy the dip.

The S&P 500 is trading near all-time highs, and will set new highs before the market crashes.

So don’t panic and sell. Buy more, as this bull market still has at least two years left in the tank.

Did the Economic Boom Leave You Behind?