The Fed’s Caution Is a Boost for Gold

The Federal Open Market Committee met today, and the Federal Reserve has stayed its hand once again. With U.S. economic readings beginning to fluctuate, and signs of slowing growth beginning to emerge, holding interest rates at current levels is a prudent move for the Fed.

Unfortunately for the U.S. dollar, this hint at caution from the Fed could pressure the greenback lower, adding to the dollar’s recent tailspin.

The dollar took off like a rocket following the 2016 election in November, as markets saw President Donald Trump’s economic agenda as a bullish driver. What’s more, the Fed hiked interest rates for the first time in a year in December, adding fervor to the greenback’s advance.

Since the beginning of the year, however, the dollar has found little support, falling more than 3.5%. Trump has publicly stated several times that he believes the U.S. dollar is overvalued, and he is in favor of weakening the currency. In an interview back in April, Trump said:

I think our dollar is getting too strong, and partially that’s my fault because people have confidence in me. But that’s hurting — that will hurt ultimately.

In fact, the U.S. dollar may be on the verge of heading even lower as Trump moves to make good on his recent promises. Of course, there is a natural hedge for a falling U.S. dollar, and, if you haven’t already, it’s high time you took a closer look at investing in gold.

The Dawning of a Gold Bull Market

At the end of 2016, financial publications and the mainstream media were hailing the renewal of a four-year bear market for gold. The logic, as you might have guessed, was that Trump’s “America First” agenda would boost the U.S. dollar and send gold crashing back to its late-2015 lows. Despite this supposed harbinger of a new bear market, gold held its ground as rising geopolitical tensions from Trump’s rocky diplomatic start prompted many investors to seek shelter.

As you can see from the chart below, 2016 didn’t exactly instill confidence in gold prices. Volatility during the U.S. election sent gold prices soaring early in the year, but Trump’s win prompted a crash solely on hopes that his economic policies would be quickly enacted and send the dollar and the U.S. economy soaring. But the situation hasn’t played out quite in that fashion. In fact, gold prices found a floor in January and began to trek steadily higher. 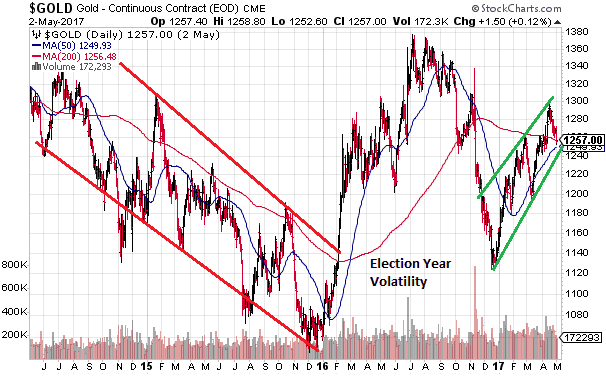 What’s more, gold has settled into a bullish trend higher during the past several months, putting together a string of higher highs and lower lows. Prices have been supported not only by safe-haven buyers, but also by repatriation of reserves by several countries, including Germany, which, back in February, brought home $13 billion in gold bars that had been stored in vaults under Lower Manhattan.

Furthermore, from a technical perspective, gold’s 50- and 200-day moving averages are on the verge of a bullish cross. This technical indicator last flashed in early 2016, just before gold surged to an annual high.

While the same election-year volatility is absent this time around, inaction from the Fed and Trump putting pressure on the U.S. dollar could provide more than enough fuel for the early stages of what should be a much longer rally for gold.

A Miner for a Heart of Gold

If you’re thinking about adding some gold bullion to your reserves or your investment portfolio, I wouldn’t wait too long. But while doing so is an excellent store of value in preparation for the future, there are better ways to make a return right now.

Last year, my colleague Paul urged readers to “Stop Panic Selling Gold Mining Stocks.” The reason: Gold mining companies are on the verge of breaking out of their own bear market. Mining companies have emerged from this bear market leaner and much more profitable than before. 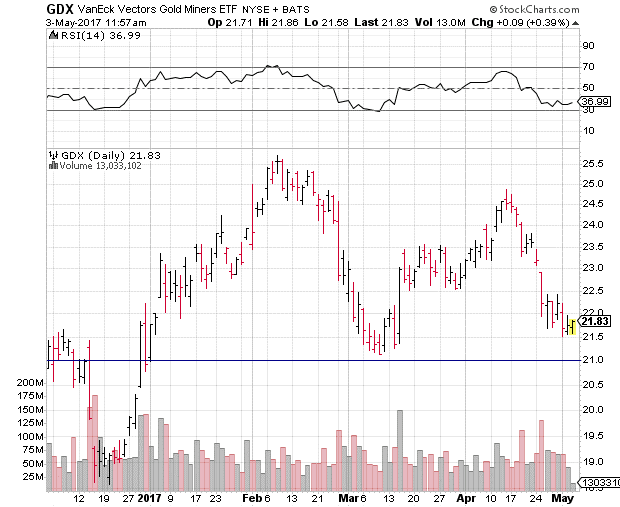 As this chart of the Market Vectors Gold Miners ETF (NYSE Arca: GDX) shows, gold mining stocks are hovering just above oversold levels and their March lows. As gold prices move higher, so too will mining stocks, only to a much greater degree.

The bottom line is that you should be adding gold bullion to your portfolio right now, as prices are in the early stages of heading higher. Additionally, taking out a long position in GDX is a sound move. Or if you’re looking for more bang for your buck, check out this month’s edition of Real Wealth Strategist to get Matt Badiali’s inside tips on which gold miners look the most promising.

P.S. There’s a “magic” metal that will soon become the most fought-over commodity on the planet. It’ll be more sought-after than land, water, oil … and even gold. After all, there are only enough reserves of this metal left to last 15 years. However, there’s a new discovery that could solve the shortage crisis … and change the lives of investors who get in early enough. Click here to see why one little-known mining company is about to see its stock price skyrocket.

The Rush for Gold Is Now