A Falling U.S. Dollar Is Good News for Overseas Business

The U.S. dollar could be showing signs of weakness.

In January 2017, it hit its highest value in over a decade against a basket of 10 leading global currencies. Since then, it’s moved lower. 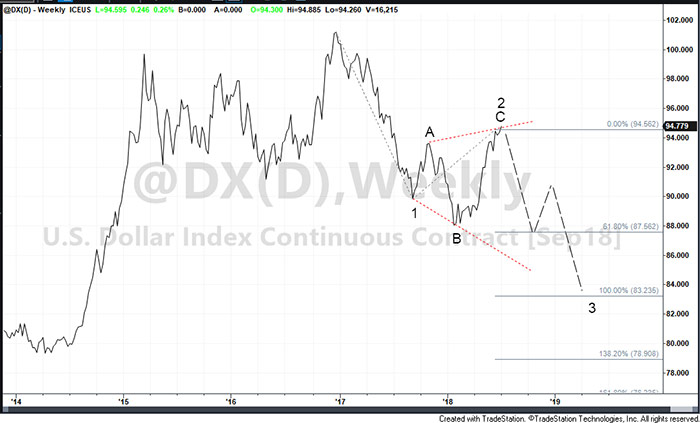 I’ve marked out a three-wave consolidation (A-B-C) on this weekly chart of the U.S. dollar. It’s a broadening wedge pattern that suggests the larger downtrend, which began in 2017, will resume.

In the coming quarters, the U.S. dollar index could fall by 11%, according to the pattern.

That may not sound like much, but it’s a significant move in the currency market.

The world runs on dollars. Nearly 40% of global debt is issued in dollars. And 85% of foreign exchange includes the dollar.

Emerging market economies, for example, depend on foreign investment capital to fuel growth. And emerging market investment opportunities are more attractive when the U.S. dollar is expected to fall.

China, India and other emerging markets will have the greatest impact on global growth in the years ahead. They will drive demand for natural resources and materials like copper, cement and crude oil.

They will also drive the demand for new infrastructure projects that use innovations such as alternative energy and state-of-the-art battery technologies.

A weaker dollar helps them attract the investment to do all that. Last time the U.S. dollar dropped 11%, a popular emerging markets exchange-traded fund (ETF) gained 31% and a U.S. basic materials ETF rose by 20%.

The future is in these up-and-coming economies. That’s why energy, industrial and material companies report more than 40% of their sales come from the business they do overseas.

A straightforward way to target these sectors is through the SPDR S&P Global Natural Resources ETF (NYSE: GNR).

GNR holds shares of some of the world’s leading energy and basic materials companies, including BHP Billiton, Exxon Mobil, Vale and Weyerhaeuser.