The value of the yuan, China’s currency, is falling.

When its value plunges, investors cut their exposure to China.

And when investors’ money flees China, asset markets get punished. 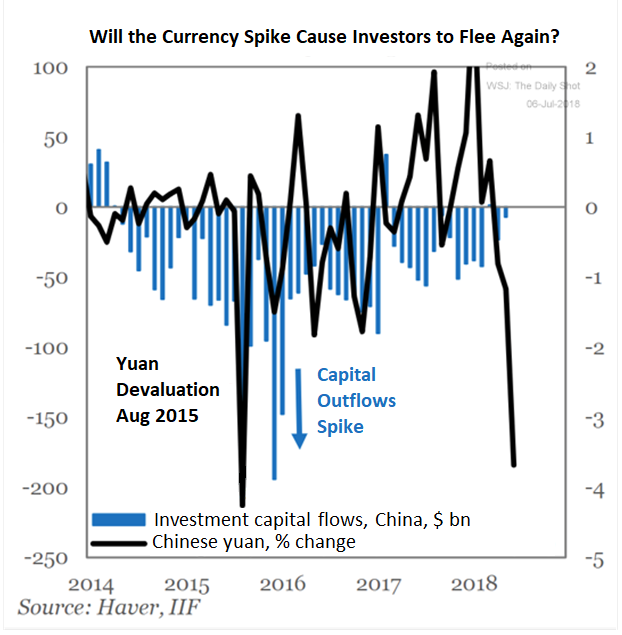 The black line on the chart above represents the percent change of China’s currency. The blue lines show the flow of investor cash into and out of China in billions of U.S. dollars.

Chinese officials devalued the yuan in August 2015. They decreased its value by more than 4% in two days. This dwarfed its typical moves of 0.25%. This is important because it chased investors out of China.

Why would China do this?

Back then, China’s economy was closed to most investors. Capital was either locked in China or locked out. But China’s economy is opening up as it matures. A more open economy means money is freer to flow.

But there’s a catch: A currency with falling value sinks the value of investments denominated in that  currency.

Back to our chart…

When the Chinese yuan was devalued in 2015, owners of capital rushed for the exits. The amount of capital flowing out of China (the blue lines) spiked.

The last time this happened, global investors bailed out of natural resources until the dust settled.

From December 2015 to February 2016, the Invesco DB Commodities Index Tracking ETF (NYSE: DBC), an exchange-traded fund that tracks the prices of 14 different commodities, shed 15% of its value.

How To Profit Off China’s Falling Yuan

Today, the value of the yuan is falling again. And fast. The 4% drop in June was its largest one-month decline since 1994!

If the value of the yuan continues to fall, commodity prices could fall. Investors in copper, aluminum and steel should be prepared to take profits.

And when the dust settles, prepare to get back in at discounted prices. I’ll keep you up to speed as things unfold.

A Falling U.S. Dollar Is Good News for Overseas Business