Thomas Jefferson’s Fourth of July Message for You

Today, July 4, the United States of America celebrates our national birthday, the 242nd year of independence from Great Britain.

On this day in 1776, Americans received the eloquent Declaration of Independence that has served as a freedom template for countries worldwide.

The Unanimous Declaration of the 13 United States of America

When in the course of Human Events, it becomes necessary for one people to dissolve the political bands which have connected them with another, and to assume among the powers of the earth, the separate and equal station to which the Laws of Nature and of Nature’s God entitle them, decent respect to the opinions of mankind requires that they should declare the causes which impel them to the separation.

We hold these truths to be self-evident, that all men are created equal, that they are endowed by their Creator with certain unalienable Rights; that among these are Life, Liberty and the pursuit of Happiness.

This annual day should have, for each of us, a far greater meaning than fireworks, picnics and a day off work. 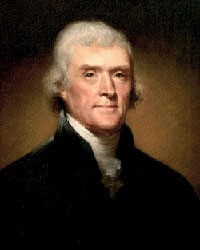 The principal author of the Declaration, Thomas Jefferson, expressed his wish that “the annual return of this day will forever refresh our recollections of these rights, and an undiminished devotion to them.”

As he lay dying at Monticello, his Virginia hilltop estate, in June 1826, Jefferson wrote to citizens in Washington, D.C. He died 10 days later, on July 4, within hours of the passing of his old friend and fellow founder, John Adams, the second U.S. president.

Jefferson speaks about this day across the years to all generations — to you and to me. I urge you to read his eloquent letter, an exaltation of individual and national liberty and the blessings of self-government. 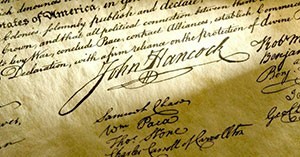 One of history’s most memorable affirmations of freedom — at a time when 20% of Americans were slaves — the Declaration asserted a universal human right to “Life, Liberty and the pursuit of Happiness.”

This bold document — in effect, a declaration of war against the mother country — was endorsed by the signatures of 56 brave men who, under pain of death, pledged their lives, fortunes and their sacred honor. Many of the signers would pay with imprisonment, financial ruin, torture and death in the eight years of war that followed.

Grievances, Then and Now

We forget that July 4, 1776, was the culmination of what the Declaration describes as “a long train of abuses and usurpations” imposed on Americans by King George III and the British parliament. Henceforth, America, as an independent sovereign state, no longer would suffer an irrational ruler’s tyranny.

For America today, there is a disturbing familiarity about the many offenses described: attacks on legislatures, ignoring laws, unwanted restrictions on free immigration to America, “obstructing the Laws for Naturalization of Foreigners,” obstructing courts and “the Administration of Justice, cutting off our Trade with all parts of the world” and ‘imposing Taxes on us without our Consent.” And there were also the hated “swarms of Officers to harass our people and eat out their substance.”

The Declaration concludes significantly: “A Prince, whose character is thus marked by every act which may define a Tyrant, is unfit to be the ruler of a free people.”

In the last century, under both political parties, government has destroyed our freedom to a greater degree than King George III and the British ever did.

President Barack Obama’s expansive embrace of President George W. Bush’s radical use of presidential powers gave bipartisan sanction to massive violations of our sacred rights guaranteed in the Constitution and the Bill of Rights.

Under the open-ended “war on terror” and the failed “war on drugs,” politicians have eroded our liberties. The Patriot Act reimposed the hated colonial British writs of assistance and destroyed Fourth Amendment protections against unreasonable searches and seizures.

Cicero, the celebrated Roman orator and consul, believed: “Nature has planted in our minds an insatiable desire to see the truth.”

The hard truth is that unless the American people change the course of government, as a nation and as a people, we have failed. Our hard-fought independence has been lost, replaced by another, but self-imposed tyranny.

Editor’s Note: Not a single historian has given President John F. Kennedy credit for jump-starting one of the most lucrative investment programs in history. Yet this program is so profitable, it played a strong role in fueling the Kennedy family fortune to over an estimated $1 billion. And despite Wall Street’s efforts to keep this program behind a velvet rope, anyone can open one of these “Kennedy Accounts” to set themselves up for massive wealth. To find out why one financial insider went as far as to call this program “the last remaining break for the small investor,” click here.

The Assault on the Attorney-Client Privilege