The Internet of Things & Edge Computing is An Investors Dream Play

Over the past three or four years, cloud computing has been a hot topic in the tech world.

The cloud makes it easy to save and recover files from anywhere. That’s because when you use the cloud, all of your data is saved to the internet rather than your personal computer.

Companies that offer cloud storage have been seeing massive growth as more companies and people use it. But now the next step in the technology is here: edge computing.

First, it’s important to note that edge computing is not completely independent of the cloud. Rather, it builds off of it. The “edge” is a form of local storage, which means you don’t need an internet connection to use it.

One of the most important parts of edge computing is its use for the Internet of Things (IoT). When a device in the IoT collects data, it’s analyzed “on the edge,” right there in the device. Then, the data that matters is sent to the cloud.

That’s highly convenient, as some IoT devices don’t have a stable, continuous internet connection. For example, sensors gathering power level data on solar panels in the Sahara Desert or humidity level data in a sewer most likely don’t have constant high-speed internet access.

So, the fact that they can do all of their work on the edge and then send over a report to the cloud a few times per week is extremely helpful and a big time-saver. 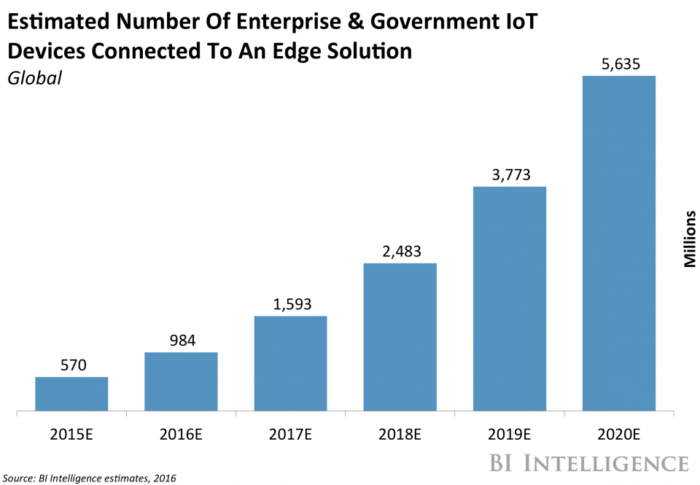 Right now, since edge computing is still a very new technology, there are not a lot of small publicly traded companies to invest in it. However, some of the leading tech companies are already ahead of the curve.

Two investments that I believe are worth getting into for edge computing are Nvidia Corp. (Nasdaq: NVDA) and Amazon.com Inc. (Nasdaq: AMZN).

Nvidia has a device called the Jetson TX2 that enables edge computing for artificial intelligence machines, another huge trend in tech.

Amazon recently launched software called Greengrass that allows IoT devices to connect to each other and process/transfer data even when they don’t have an internet connection.

Edge computing is a market that has been quietly growing for a couple years now, but it’s beginning to come to the forefront of new technology. I believe it will continue to become more relevant as its customer base begins to accelerate over the next three to five years.

3 Threats to Amazon You Must Own Today

Get Ahead of 2 Big Tech Rallies Now