Trapped in a Prisoner’s Dilemma

When a man has so far corrupted and prostituted the chastity of his mind as to subscribe his professional belief to things he does not believe, he has prepared himself for the commission of every other crime.

These are the words of Thomas Paine, a founding father of the United States, and author of the influential pamphlet Common Sense that inspired the rebels in 1776 to launch the American Revolution against Britain.

A few days ago, Ahsan Kureshi, a Pakistani author writing in The Nation about his land, said:

This shamelessness that has now become a norm in our country is alarming. Everyone is shameless at doing wrong, exploiting at their own level. … A Pakistani way to live has to be an amalgamation of shameless hypocrisy, exaggerated opportunism and the death of conscience.

Writing in the same week, 7,170 miles and 10 hours away, an economics professor contributing to the venerable Indianapolis Star brought home the Pakistani lament:

In lieu of a constructive discussion … we get pure nonsense with the loudest, least informed and vilest voices getting the grandest stage. Perhaps we are trapped in a prisoner’s dilemma, where only the most polemical and vacuous claims are offered by our political class. As voters, we deserve nothing better than the fruits of our electoral choices.

The recent tax legislation is a sickening example of political hypocrisy.

Nine years ago, when the Democrats controlled the presidency and Congress, they adopted a trillion-dollar fiscal stimulus and huge tax cut, while the Republican Party voted against it, loudly protesting about the deficit and national debt.

Last month the exact reverse occurred, with the controlling GOP voting in bloc for large tax cuts, and the Democrats voting unanimously against, latter-day converts to concern about deficits and the national debt — today at $20.6 trillion, $10 trillion higher than in 2009. (Click here to see what a trillion dollars looks like.) 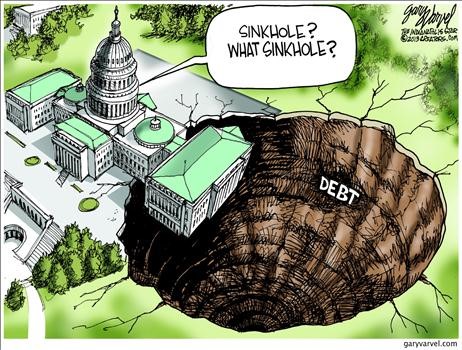 Political hypocrisy reminds me of the blatant hypocrisy of Captain Louis Renault in Casablanca, the police captain in the classic Casablanca, played by the memorable Claude Rains.

Republicans, who piously professed shock at huge deficits under Obama, now show little concern. Talk about Thomas Paine’s concern about “prostituting the chastity of the mind”: Republicans repeat the new party line that tax cuts will produce economic growth to pay for themselves, a claim refuted by economic models and historical precedents.

I never believed in the magic of the “supply-side economics” of my late good friend, Rep. Jack Kemp of New York. When we served together in the House of Representatives, I declined to co-sponsor his tax-cutting legislation because it was not balanced with spending cuts and debt reduction.

Consider the similarity between the U.S. government’s fiscal policies and the current financial craze of bitcoin and other cryptocurrencies.

Their only function is to create new fortunes based solely on a belief that the price of a computer-generated number has value and will keep rising. What differentiates the bitcoin mania from the U.S. dollar and the bankrupt U.S. government?

Congress, the Federal Reserve and the government pretend to create money. Unthinking people may believe these fake “assets” have value, but they too are only digits in computers and stacks of paper printed, not gold or silver.

So, we have an overhaul of the U.S. tax code, but what about the U.S. national debt, already one of the world’s largest debt burdens?

As of 2017, the government’s gross debt was at 108.1% of gross domestic product, according to the International Monetary Fund. Only four large countries have more debt for the size of their economies: Japan, Portugal, Italy and Greece. Indeed, thanks to the Bush-Obama-Trump spending binge, America is on a path to becoming a failed Greek-style welfare state.

Do Something About Political Hypocrisy

Here’s where I am supposed to advise you to send “Do something about this political hypocrisy!” emails to your honorable congressman or senators. But my fellow Marylander H.L. Mencken was on target when he described the American politician: “His public life is an endless series of evasions and false pretenses.” So why bother?

The late governor of Alabama, George Wallace, in 1968 said: “There’s not a dime’s worth of difference between the Republicans and Democrats.” That is even truer today when both parties have embraced the cynical political theory of “tax, spend and elect.”

Thomas Paine also courageously said: “If there must be trouble, let it be in my day, that my child may have peace.”

This enormous national debt will be paid by inflation when prices rise, when the value of the dollar drops, when the next Great Recession arrives. Generations of Americans born and unborn will pay for our collective financial sins, not only in dollars, but in misery and lost freedoms — if America even survives.

Editor’s Note: “Freedom checks” are far superior to what you can get with Social Security, 401(k)s and IRAs. They even have the potential to pay out vastly more than CDs, junk bonds and stocks. With freedom checks, you could make $1,000 a month … $10,000 a month … maybe even $100,000 a month! But to claim your full share, you must get started today! To find out how to sign up now and start getting your checks in the mail as soon as possible, click here.

Former Congressman’s Thoughts on the Year Ahead