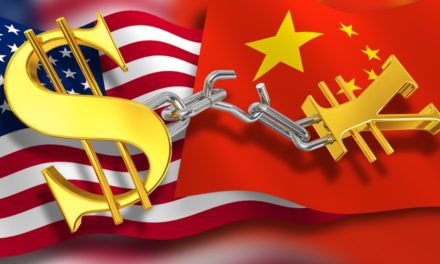 Stocks that make up the S&P 500 Index lost $1.4 trillion of value in just four trading days. And Washington, D.C., capped it off by labeling China a currency manipulator.

Sure, China allowed its yuan to weaken below a critical level of seven per dollar on Monday. We haven’t seen it that low since 2008.

But that’s not manipulation. The sudden drop in China’s yuan is a response to trade war escalation.

Smart investors will soon realize that China’s yuan manipulation is nothing to fear. Rather, it’s a buying opportunity — if you know where to look.

And I’m going to show you exactly where to find it.

Chinese officials will do whatever it takes to avoid a currency free fall. A devalued yuan will hurt more than it will help. 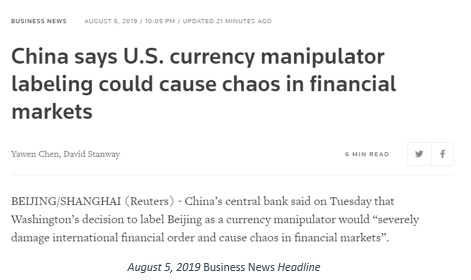 But a huge risk could more than outweigh the benefits of devaluation.

You see, the Chinese yuan is not a free-floating currency like the U.S. dollar. The dollar’s value is determined purely by supply and demand in the open market.

On the other hand, the People’s Bank of China sets the yuan’s value each day. From there, it can float within a narrow range.

China will be careful managing its currency.

A weaker currency would invite more pressure on China’s economy in two ways:

So where’s China’s yuan manipulation headed? As you see, manipulating the yuan further would be dangerous for China’s economy.

So, forget the president’s tweets.

A Way to Buy Utilities and MLPs for Safe Returns

No doubt, China’s economy is in the crosshairs of the trade war and a weak yuan.

The market is volatile. But it won’t last.

For now, avoid Chinese stocks and those with a lot of international exposure.

Seek out U.S. stocks with little or no exposure to the U.S.-China trade war and the Chinese economy.

This exchange-traded fund tracks a group of stocks in the energy sector. They operate and serve pipelines, power transmission, petroleum and natural gas storage.

These include utilities and master limited partnerships (MLPs). An MLP is a special type of stock that offers tax benefits.

These stocks are not affected as much by the trade war’s volatility. They also pay people to own them. Those payments are called dividends.

That makes them even more attractive when interest rates are going down.

We’re keeping that in mind since the Federal Reserve cut rates last week for the first time since 2008.

It pays a generous 3.79% dividend yield, and shares could jump another 13% in the coming quarters.

I’m keeping a close eye on the markets. Stay tuned to my Winning Investor Daily articles for insight into the stock market’s volatility and any news of China’s yuan manipulation.

P.S. Join me at this year’s Total Wealth Symposium in Amelia Island, Florida. I will be discussing a strategy you can use to profit from volatile times in the stock market.