This Hurricane Season Could Devastate the Insurance Industry

There is a great debate raging on Wall Street right now. Is a market correction coming?

Market bears argue that stocks are trading at frothy valuations near all-time highs, and the Federal Reserve is unwinding the easy-money polices that helped push them there.

Regardless of which side of the fence you fall on, it’s time to start looking for a bit of security. Even if the market bulls are right, lofty across-the-board stock prices can’t hold indefinitely.

Certain sectors are bound to outperform in the long run, after all, especially if the Fed removes Wall Street’s training wheels.

One of the most obvious places to look for security in such volatile times should be among those hardest hit by the last major market correction.

Few sectors were hit harder than insurance companies in 2008. So, it stands to reason that, having learned their lessons, insurance stocks should be among the safest investment options when debating the potential for another market crash.

But some lessons are not so easily learned…

The Dangerous Quest for Yield

The Fed’s loose monetary policies have provided easy money for many on Wall Street. But these same policies have undermined core long-term investment strategies used by many investors. Yield has evaporated.

No longer can your average investor bank on risk-free savings yields, such as certificates of deposit. The yield is just too low to be sustainable. The same can be said for corporate bonds, Treasurys and even high-yield bonds.

Those sources of income are not coming back anytime soon.

Unfortunately, insurance companies are even more at risk in the current market environment. Pressured to make up for the heavy losses suffered in the 2008 financial crisis, the insurance sector diversified away from low-risk bonds and Treasurys. 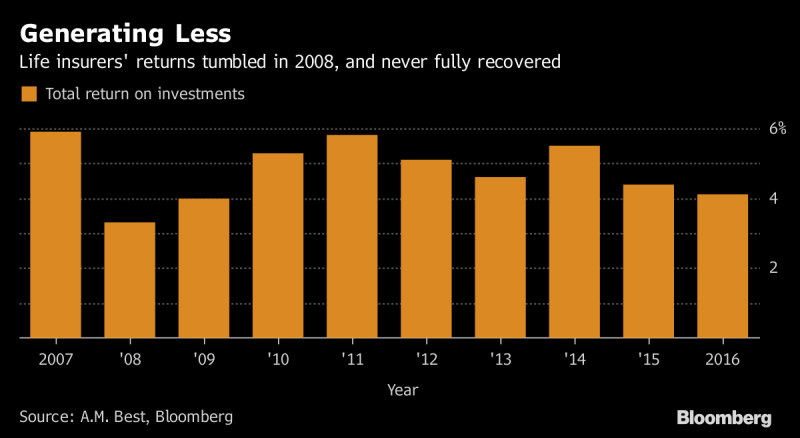 According to a recent study by BlackRock, insurers now hold a dangerous mix of stocks and high-yield debt. What’s more, some have even delved into alternative assets such as private equity investments, real estate and hedge funds — all of which can be hard to sell.

In fact, BlackRock’s study of 500 insurance companies found that the group’s investments would plunge by 11% in another market correction — making losses much worse than the insurance sector’s “mark-to-market” losses in the 2008 crisis.

Making matters worse for the insurance group is the onset of hurricane season. And this one is already shaping up to be the most costly on record.

Hurricane Harvey has already wreaked an estimated $30 billion in damages in Texas and Louisiana.

Hurricane Irma, dubbed the deadliest storm on record in the Atlantic, is threatening catastrophic damage to Florida.

If that wasn’t enough, Tropical Storm Jose is forming in the wake of Irma. It’s already projected to reach hurricane status and follow much of Irma’s path.

Financial media headlines in the wake of Harvey downplayed the risk to the insurance sector. Many analysts said that the damages were overstated, and that insurers wouldn’t feel much of a pinch from the disaster. However, stock in Travelers Companies Inc. (NYSE: TRV) and Allstate Corp. (NYSE: ALL), two of the largest homeowner insurers in Texas, fell roughly 2% following Harvey’s landfall.

Losses ahead of Irma look tenfold worse. The two leading insurance companies in Florida have already taken a beating, with stock in both HCI Group Inc. (NYSE: HCI) and Heritage Insurance Holdings Inc. (NYSE: HRTG) plunging more than 20% on Wednesday as Irma set its sights on South Florida.

The combination of a potentially costly hurricane season and an already stretched insurance sector is bad news for investors. Furthermore, while it may seem logical that an industry pounded by the last recession should have learned its lessons, such is clearly not the case. In fact, insurance stocks appear far more risky than they did last time around.

It’s times like these when you need an emotionless, rules-based trading system to see you through. My colleague Ted Bauman’s Alpha Stock Alert and Smart Money portfolio (part of The Bauman Letter) are two excellent ways to both protect and grow your wealth, even in the event of another market crash.

Editor’s Note: Banyan Hill’s Total Wealth Symposium is soon approaching, and we’re excited for all of our readers who will be attending this exclusive event. But we know that many of you won’t be able to make it, so we’ll be livestreaming some of the key presentations to give everyone a chance to learn the latest investment tips and strategies. For more details on how to livestream the event, click here.

Hurricane Harvey Could Cause a Recession

The Hidden Boom Within the Housing Boom