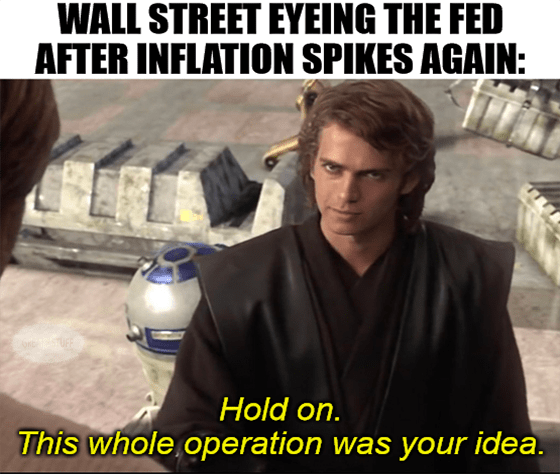 Great Ones, I was all ready to come into today like a new day rising … a brand-new sky to hang the stars upon tonight.

I figured that after last week’s barrage of bad news and Wall Street’s accompanying sell-off, the markets would even out a bit.

After all, most of Wall Street’s talking heads saw this coming. They expected it. The major financial publications have been railing on inflation day in and day out for months now. Federal Reserve watchers were already pricing in more aggressive interest rate hikes this year to combat soaring inflation.

But now … I’m a little divided. Do I stay or run away and leave it all behind?

While I’m pretty sure that everyone — aside from Jim Cramer — saw this inflation-driven bear market coming, I’m also pretty sure that nobody on Wall Street expected U.S. consumer sentiment to dive straight into the toilet like it did.

The one single solitary thing that’s kept Wall Street from careening headfirst into a full-blown bear market for the past year has been the strength of the U.S. consumer.

But the truth is now coming out. Wall Street was banking heavily on the narrative that we were near “peak inflation.” Analysts pointed toward April’s slowing Consumer Price Index (CPI) as proof that peak inflation was nigh, and that the Federal Reserve’s aggressive rate-hike plan was starting to work.

May’s CPI blew that theory out of the water, rising a hotter-than-expected 1% to hit a 40-year high.

I still think Wall Street could’ve weathered even this rise if the U.S. consumer still looked healthy. But that ship has now sailed, so to speak. I mean, just take a look at the University of Michigan’s preliminary June Consumer Sentiment Index: 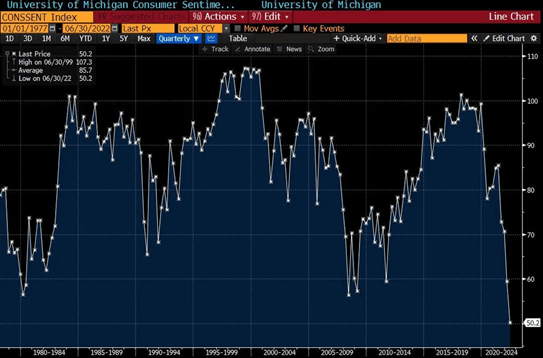 Analysts were anticipating a reading of 58.1 … not a plunge to 50.2, the lowest reading ever recorded.

U.S. consumers are more pessimistic now about the health of the U.S. economy than they were after every single one of those events. That’s both impressive and terrifying. 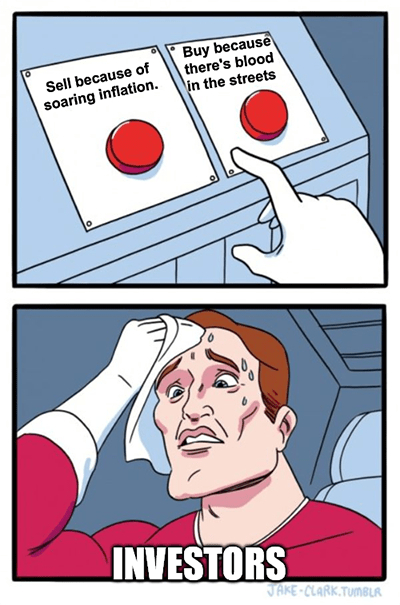 The even scarier thing is that there’s a tiny contrarian voice in my head saying: “Buy NOW! This is a massive overreaction!”

I know you’ve all heard it too. The great Oracle of Omaha, Warren Buffett himself has said: “The time to buy is when there’s blood in the streets.”

It’s tempting, I have to admit. But, Great Ones, I don’t think this passion play is over just yet.

There’s just too much going on. There are too many unknowns surrounding the Russia/Ukraine war and its impacts on food and energy security.

I believe this is going to get worse before it gets better, despite seemingly peak pessimism from U.S. consumers.

But this doesn’t mean you should start selling everything in your portfolio. No, sir! We’re Great Ones. We don’t panic!

So what do we do now, Mr. Great Stuff?

It’s times like these, Great Ones, that we learn to trade again.

Similar to the VIX, or “fear gauge,” which tells you the level of overall fear investors have in the market … the more powerful Greed Gauge can identify the precise levels of investor greed for each stock in the S&P 500 in real time.

In other words, it can tell you when to buy AND sell any stock you want.

Mike just went public with this indicator for the very first time. And in a brand-new presentation, he reveals the exact formula he used to create it — and why the Greed Gauge is the ultimate trading weapon as we flirt with another recession.

Discover the full force of the Greed Gauge right here.

The Good: A Thing Of Ulta Beauty 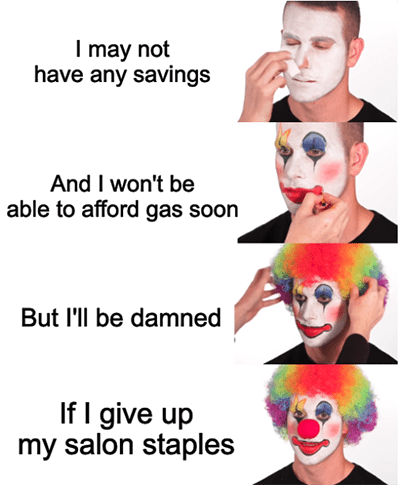 No amount of high-end eye cream can erase the bags from underneath retail investors’ eyes right now. But Ulta’s (Nasdaq: ULTA) ultra-strong demand can certainly cover up some of those recent blemishes.

After weeks of hearing nothing but lowered guidance and inventory issues from Ulta’s retail relatives, the cosmetics connoisseur gave a bullish outlook for the future after posting higher-than-expected earnings.

It makes sense when you think about it. Ulta’s customers literally went years without having to wear makeup during the pandemic.

I mean, sure, you could spend an hour painting your face for the fun of it. But who’s going to appreciate your masterpiece when you’re stuck in a house? Or hiding behind a mask whenever you do go out?

But now that masks are no longer mandatory — and with people flocking back to their corporate offices — Ulta’s business be booming.

In fact, Jefferies Analyst Stephanie Wissink reiterated her buy rating on Ulta at $475, saying the company isn’t seeing any “shift from experimental products to necessities, indicating exploration and creativity among consumers is continuing despite potential wallet tightening.”

“I may be broke, dammit. But at least I’ll look pretty.” — an Ulta customer, maybe. 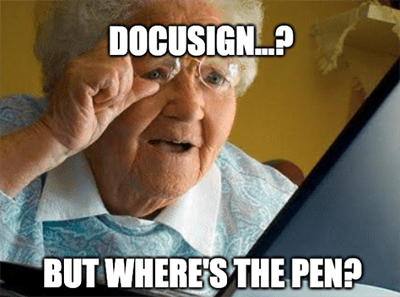 E-signatures are so 2021, Great Ones. We’re going back in time to prehistoric paper contracts now, if digital signing company DocuSign’s (Nasdaq: DOCU) earnings are any indication…

In case you missed it, the digital contract company failed to deliver on pretty much all fronts following its latest financial statement. Shares plunged 24% Friday on news of lower-than-expected earnings, only to tumble even more today as the broader market melts down.

Digital digs aside, it doesn’t look like customers are falling off DocuSign’s platform so much as they’re limiting their use of it due to document slowdown.

For example, many companies used DocuSign during the pandemic to hire new employees that they hadn’t met in person, for obvious reasons. But now that businesses are pinching pennies and hiring is slowing down … well, you get the picture.

Unless another catastrophic catalyst sends us all into lockdowns again — No God! Please No! Nooooo! — then it could be rough sailing for DocuSign shareholders.

As it stands, DOCU stock already sank another 10% today.

If you haven’t heard about Adam O’Dell’s latest profit-producing system, 10X Fortunes, stop what you’re doing and listen up.

Adam designed 10X Fortunes specifically to find stocks with the potential to hit 1,000% or more in only one year.

Most investors never see 1,000% in their lifetimes. Let alone in 12 short months. Yet Adam says these opportunities happen an average of 100 times per year … if you know where to look.

Don’t believe me? Click here to see Adam’s research for yourself.

The Ugly: That Dino Ate My Baby! 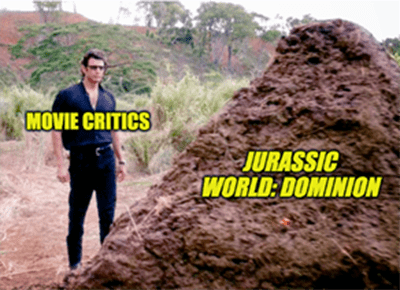 I have a confession to make: Despite seeing every other film in the Jurassic Park franchise, I haven’t gone out to see the latest Jurassic World: Dominion movie — and will probably wait until it’s streaming somewhere to watch it.

I mean, I love me some dinos … and the return of original cast members Jeff Goldblum, Sam Neill and Laura Dern hits me right in the feels.

But have you seen the reviews for this movie? They stink more than a steaming pile of triceratops dung.

One critic says: “Inevitably, Jurassic World: Dominion will make a fortune worldwide, since these films always do. But in credibility terms, it’s an extinction-level event.” Ouch.

Whatever your personal thoughts on the film are, that reviewer got one thing right: Dominion is absolutely devouring the box office right now.

Its opening weekend brought in more than $143.4 million, unseating Top Gun: Maverick from the top moviegoing spot. Dominion is also on track to become the highest non-superhero opening of the post-pandemic era.

As much as I hate to admit it, Universal — the Hollywood studio of Comcast (Nasdaq: CMCSA) — was right to delay the release of the final Jurassic World movie until after the pandemic died down.

Millions of people are now going back to the movies with the world reopening, putting a lid on the claim that movie theater chains like AMC (NYSE: AMC) are going the way of the dinosaurs.

You know what they say: Life — and the box office — find a way.

Any Great Ones wanna jump in on today’s topics? Are y’all feeling as down as the Consumer Sentiment Index indicates? Have you built a bunker yet? And is Jurassic World actually any good? Any of y’all seen it yet?

Inquiring minds want to know! So drop us a line at GreatStuffToday@BanyanHill.com and let us know! 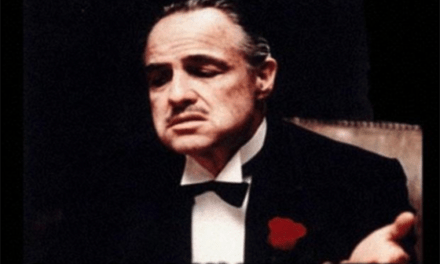 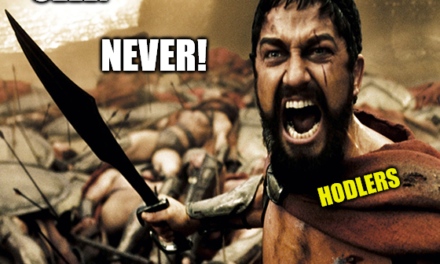