The Biggest Stock Market Danger of 2021 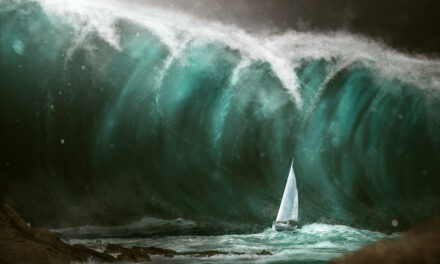 Back when I delivered and raced sailboats on the open ocean, you picked your heading and set the sails accordingly. The wind took care of the rest.

Other times it was all hands on deck. Reefs, dangerous currents and massive merchant ships at close quarters required constant vigilance and course corrections.

For investors, autopilot has worked well for much of the last decade. The Federal Reserve’s largesse produced an epic bull run. It’s been easy to go along for the ride.

The COVID-19 pandemic changed all that.

The Fed is still providing a steady breeze … but danger lurks just beneath the surface.

You’ll need them for what’s coming…

The last decade convinced many that the Fed will always support the stock market. It’s the wind in its sails, so to speak.

But the Fed can’t fix everything. Above all, it has no control over the dangers lurking below the surface of the real economy.

The single biggest danger in the real economy right now is corporate debt.

If companies default on their debt, the knock-on effects spread quickly. Employees, suppliers and lenders are pulled into the maelstrom.

Under normal circumstances, the yield spread is around 1% to 2%. But in times of economic stress, spreads skyrocket. Investors demand higher risk premiums. That’s what happened in 2008-2009, and in March this year:

High yield spreads are extremely dangerous. Most corporate debt is relatively short term and must be “rolled over” into new bonds every few years. When the yield spread rises, those new issuances involve higher interest rates. That additional expense cuts into companies’ operational income.

If the company is reasonably healthy, that means a reduction in profit.

But if the company is barely managing to make interest payments on its existing debt, demands for higher yields can quickly push it into bankruptcy.

Counterparties are hit hard, potentially pushing them into insolvency as well. It’s like those awful news clips you see during a hurricane, where one boat torn loose from its moorings is blown into a pile of others, destroying them all.

That’s why, when the economy is under severe stress, bond markets demand higher yields to compensate them for higher risk.

Look back at the chart above and compare the duration of the spikes in yield spreads at the time of the great financial crisis to this year.

This year’s spike was short and sharp. Since then, spreads have fallen back to the lower end of their normal range.

Even the riskiest part of the corporate debt market — bonds rated Triple C and lower, at the highest risk of default — in November, saw the biggest investor inflows since 2016: 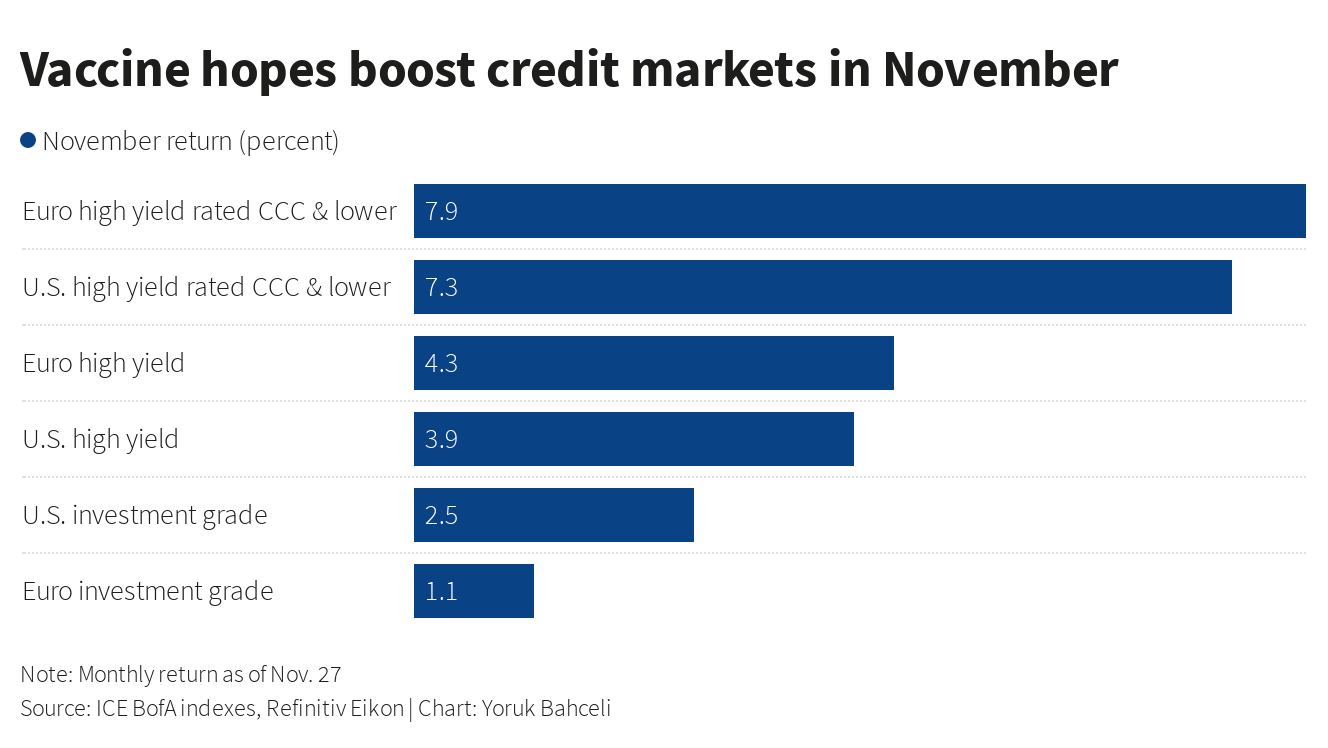 And it’s not just bond buyers jumping into the corporate debt market.

New U.S. corporate debt issuance has skyrocketed since the beginning of this year: 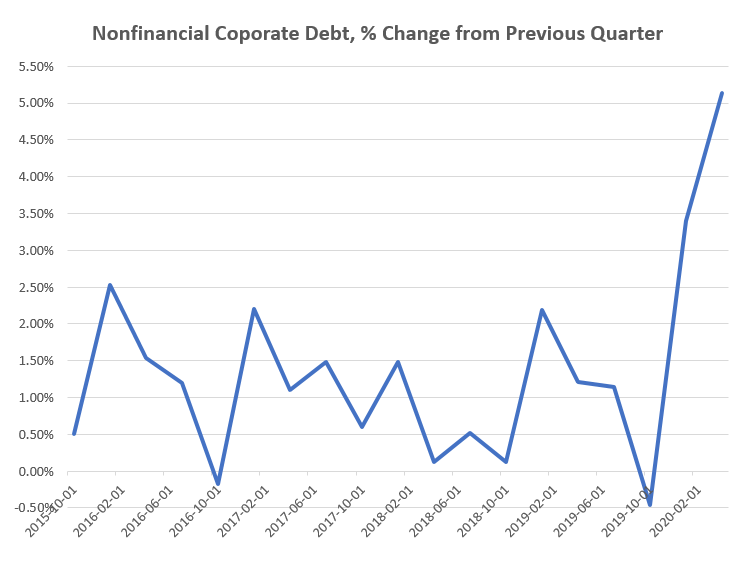 We’re in the midst of a global pandemic. Entire industries are being decimated as consumers stay home.

Unemployment is at levels last seen during the great financial crisis. New unemployment claims have risen for the last two reporting periods … the first time that’s happened since March.

So you can be forgiven for asking how corporate debt markets can be so sanguine.

The answer, once again, starts with the Fed.

Back in March, the Fed and the Treasury Department negotiated a special arrangement to support corporate debt markets. (An accounting gimmick got around the pesky Federal Reserve Act of 1913, which forbids the Fed from buying nongovernment debt.)

The Fed would buy corporate bonds directly out of the market, as well as exchange-traded funds that owned such bonds. If bond yields started rising, Fed purchases would push them back down again.

But the Fed barely used the facility. Its mere existence was enough to convince bond investors that the Fed had their backs.

That kept yields low and spared the U.S. economy from widespread bankruptcies (at least for companies big enough to use the bond market).

But in mid-November, U.S. Treasury Secretary Steven Mnuchin instructed the Fed to close this facility and return the funds to the Treasury Department. He said it clearly wasn’t needed since it had barely been used.

Incredibly, given the massive impact this facility had on yield spreads, many investors have failed to notice this.

They’ve convinced themselves that a vaccine is right around the corner and that somehow Congress will eventually agree to a stimulus package that will keep floundering companies afloat.

But even the most optimistic estimates suggest that it could be six to nine months before vaccines are widely enough available to allow a return to something like normality.

A lot can happen in that time … especially if Republicans and Democrats keep fighting each other rather than enacting desperately needed stimulus.

To make matters worse, on December 31 this year, a slew of special pandemic response measures are scheduled to expire. This includes deferment on student loan payments, mortgage forbearance, the federal eviction moratorium and unemployment insurance for tens of millions of people.

With all this happening, a sudden burst of bankruptcies could send the stock market into a tailspin.

So remember this: The Fed may provide lots of energy to stock prices … but keeping an eye on the shoals lurking all around your investments is entirely your responsibility.

Fortunately, if you’re a Bauman Letter subscriber, it’s a responsibility you’ve embraced. After all, my team and I are here to help you navigate whatever comes! 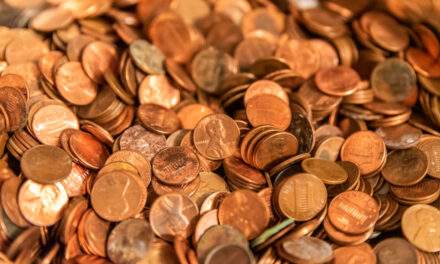 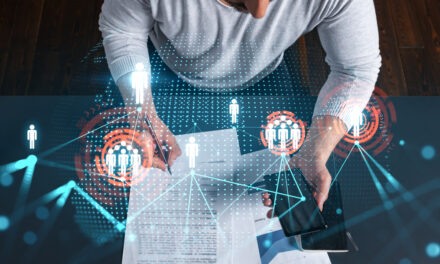