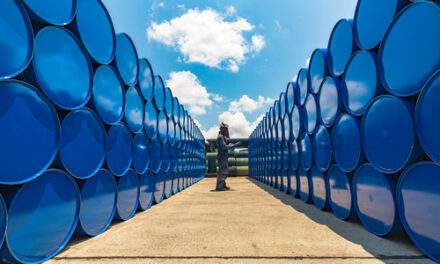 Imagine you’re in the market to buy a home, and you have your eye on the perfect house.But housing prices are falling, and you think you can get a better deal than what’s on the listing…You call up the owner and say you’ll buy it 8% below the current value. You stress that you absolutely MUST buy this house since it’s the only house that meets all your requirements. You even put the house under contract so that if prices fall, you lock in your 8% discount.Your real estate agent would advise against that call, because you never want to show a seller how eager you are to buy. You lose room to negotiate. And if prices fall 20%, you’ve committed to overpaying.Everyone knows not to do this. Yet, because of Biden’s recent actions, it’s precisely the situation the U.S. government finds itself in now with the oil market.Due to a set of strange circumstances, the U.S. government has locked itself into buying American oil at a specific price no matter what happens.It’s just one of many factors pointing to a strong bull market in energy stocks dead ahead. But unlike all those other factors, this is one we can virtually guarantee.

Thanks, Biden: The U.S. Has No Room to Negotiate

Let’s imagine a different scenario now…In this one, you’re a high-ranking U.S. government official. You need to buy some oil. And by “some” I mean two weeks’ worth of the country’s total supply.A good negotiator wouldn’t say much at all in this situation. But because of the actions of the U.S. government, negotiators don’t have much ground to stand on.Over the past few months, the government has released 180 million barrels of oil from the Strategic Petroleum Reserve (SPR). This was done essentially to keep the cost of gas down after a large spike earlier in the year. And, it worked. Gas costs are down considerably, with the national average down to $3.35 from a high of $5.10 in the summer.Many believe this was done as a bid to keep Democratic voters happy until the midterm elections. That also worked, as Democrats held the Senate.The move was great for the administration in the short term. Now, though, it’s backfiring.The law says the SPR should hold an amount equal to 90 days of imports. The U.S. imports about 6 million barrels of oil a day. So, the SPR should hold about 540 million barrels of oil.Right now, it’s holding 387 million barrels. Officials now need to buy 153 million barrels of oil to comply with the law.About 99.98 million barrels of oil are produced every day around the world. Demand averages 99.82 million barrels per day. That’s a surplus of just 0.16 million barrels per day.Assuming the U.S. bought all of the world’s surplus, it would take more than three years to refill the reserve.The math is daunting. But the point is simple…The U.S. is required by law, right now, to buy a lot of oil. And because of that, they need to put together a plan for how much they’ll pay and for how long.This has eliminated any negotiating power the U.S. may have had before.It’s also set a hard floor under oil prices. And this will help drive oil prices higher over the next several years.

The Department of Energy (DOE) published rules for refilling the SPR. The agency has agreed to buy oil between $67 and $72 a barrel for delivery in 2024 or 2025. Contracts can be granted at any time.The purpose is noble — DOE is trying to stimulate production by ensuring demand will be there. But again, by doing this, there is now zero room to negotiate. The U.S. WILL buy oil at these prices, and it’s required to by law.The result is that oil prices now have a floor at around $70. That’s higher than the price we’ve seen most of the time in the past seven years.

This sets up a potential bull market in energy stocks.Producers have a guaranteed market for oil at $70. Oil pumped for less than that has an almost guaranteed profit.That means energy stocks should enjoy a multiyear bull market. Domestic producers, especially, can count on the U.S. government to buy oil from them around $70 for a long time to come.Right now, my colleague Adam O’Dell is putting together a list of his favorite oil companies in the market. He’s going live with them later this month … and if you put your name down here, you can be first in line to learn more about them.Keep Investing,

Michael CarrEditor, One TradeP.S. I’d love to know what you thought of today’s Banyan Edge … and everything that the team has sent you so far.Did you enjoy Monday’s discussion about energy stocks and inflation? What about Ian King’s big idea on semiconductors … or Charles Mizrahi’s video from yesterday about Carvana?Write in all your feedback to BanyanEdge@BanyanHill.com, along with any questions you’d like us to answer on next week’s podcast.