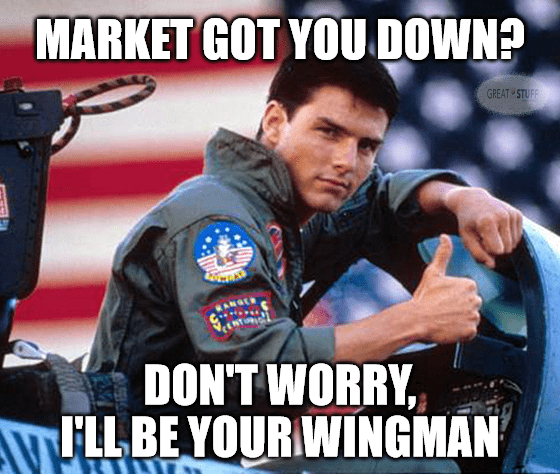 Great Ones, are you feeling the need for speed? Ready to jump off the deck and shove it into overdrive?

Might as well. We’re already on the highway to the danger zone, Mr. Great Stuff.

Well, I’ve got two potential sleepers all wrapped up in one tidy package today … and it all starts with Top Gun: Maverick.

Now, I have to preface this with a little bit of shame on my part. I have not seen Maverick … yet. I spent the weekend with family, celebrating our freedoms and remembering that all gave some, and some gave all.

That said, millions of you saw Maverick this weekend, handing Paramount Global (Nasdaq: PARA) a record-breaking $153 million for the Memorial Day weekend.

There is an obvious catch here, in that last year a large portion of the U.S. was still operating under COVID-19 restrictions. But, still … it’s hard to look at that opening weekend total and not be impressed.

Well, some of it is, anyway. But I digress…

By the same right, Aron didn’t get so far into the meme stock hype that he let it affect the company’s business model … unlike some meme stocks. *cough cough* GameStop *cough cough*

This has always been my sticking point when it comes to investing in AMC. I like the company’s rebound prospects as the U.S. continues to bounce back from the pandemic. As such, I think AMC is likely undervalued right now.

Assuming there are no other major pandemic-related issues — and that we don’t get a massive recession — AMC stock has the potential to double in the next year as movie studios flood the market with titles they’ve held in reserve for the past two years — just like Maverick.

If you have the risk tolerance to ride out not only Wall Street’s jitters but also AMC’s meme stock swings, AMC could be a solid investment right now.

Meanwhile, we can’t overlook Paramount’s accomplishment here either. The company just put out an amazing movie, by all reports. Not only that, but it held that movie for more than a year just so that it could reach full capacity at the theaters.

Paramount was often derided for its decision to hold Maverick, but that decision has paid off in spades.

So? It released a blockbuster franchise that we all wanted to see. I don’t get the hype.

Dude, I’m so tired of hearing about streaming services! 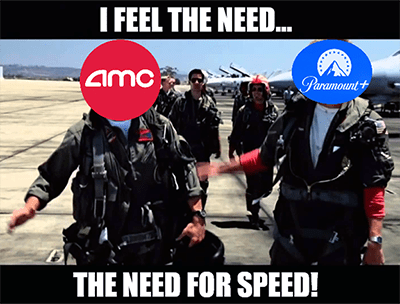 I hear you. In this day and age of Netflix and Disney+, we’re all kinda tired of hearing about streaming services … just ask Netflix.

But here’s the thing: Netflix has extremely little room for continued growth at this point. Disney+ is nearly in the same boat — especially if you include Hulu subscription numbers in the fold.

Both Disney and Netflix are entering a new limited-growth phase in the streaming market.

Furthermore, I believe that most investors have overlooked Paramount’s intellectual properties.

The company has Star Trek, SpongeBob, Friday the 13th, G.I. Joe, Transformers and Indiana Jones, just to name a few. Paramount may not have Disney’s ridiculously large collection of franchises, but it can more than hold its own … especially against Netflix, which is still developing its franchise collection.

In fact, Paramount has the potential to be a sleeping giant in the streaming market. Leverage that against its presence in the traditional theater market and its CBS Media Networks division, and PARA stock looks like it too has the potential to double in the next year or so.

Yes, if you’ve got the risk tolerance to ride out the current market conditions. No, in that I’m not adding it to the Great Stuff Picks portfolio just yet. I need to see a bit more price stability before I officially recommend anything. The market is what it is, you know.

Still, those are two potential investment ideas for those of you with the capital and risk tolerance to take advantage of them: AMC and PARA.

What about … hear me out … we find the Top Gun of crypto trading?

That’s … an interesting way to phrase it, but thanks for the lead-in. I guess.

Here’s the skinny: America’s No. 1 crypto expert says: “Bitcoin’s best days are behind us … and one Next Gen Coin is going to take center stage.”

Experts predict this one coin will soar 7,200% by the end of the decade — and grow 20X bigger than bitcoin! But you must get in before its big upgrade.

Get the full story here.

After production all but ground to a halt last month amid rising COVID cases, Tesla’s (Nasdaq: TSLA) Shanghai plant is recovering faster than many thought possible — myself included.

According to a recent article, Tesla’s electric vehicle (EV) factory is back up and running at about 70% of its operational capacity.

But to combat ongoing COVID concerns, workers at the Shanghai plant are working in a “closed-loop” setting until June … meaning they’re isolating themselves from the rest of the world while China maintains its zero-COVID policy.

Think of it like a sleep-away camp … except instead of fun activities and bunk beds, people are expected to work 12-hour shifts and sleep on mattresses on the floor.

That … umm … sounds like it would violate some kind of workers’ rights law, no?

Under normal circumstances, probably. But this is China and Elon Musk we’re talking about … and that’s all I’m gonna say about that.

Working conditions didn’t seem to worry Wall Street one bit either. Not with Tesla’s vehicle delivery rate down by the tens of thousands thanks to the plant’s previous closure.

While Tesla’s turnaround story isn’t guaranteed, shareholders still looked favorably on this latest bit of Shanghai news and lifted shares ever-so-slightly into the green. Considering the path TSLA stock has been on lately, we’ll call this one a win.

Only 5% of all new cars sold today are electric … but that number is expected to surge in the coming years.

And there’s one investment that could allow you to profit from nearly every new electric vehicle.

All the details surrounding this brand-new opportunity can be found right here — but don’t delay.

Better: All That Glitters Is Yamana Gold 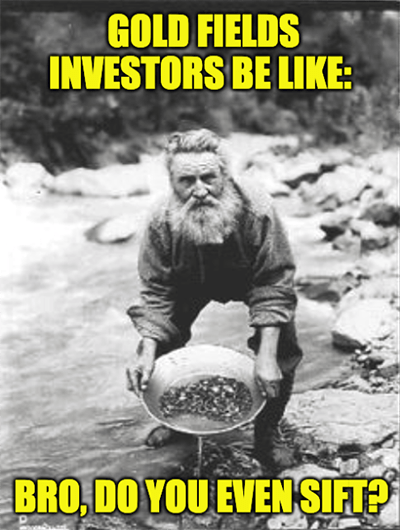 Shares of Yamana Gold (NYSE: AUY) shone bright this morning on news the Canadian miner agreed to be acquired by rival metallurgist Gold Fields (NYSE: GFI) in a match worth $6.7 billion.

Under the terms of the deal, Yamana Gold investors will receive 0.6 GFI shares for every one AUY share they own — a 34% premium to the price Yamana’s traded at recently.

Like a dragon collecting treasure under a mountain, Gold Fields has slowly been growing its geography of gold deposits and will now become the fourth-biggest producer of the yellow ingot.

Yet despite moving up in the world of malleable metals, Gold Fields investors were none too pleased by the direction their company is headed in upon completion of the deal — with shareholders sinking GFI stock 21% lower on the news.

Something tells me that $6.7 billion price tag has something to do with it. But if market uncertainty continues, and more investors move into tangible assets, Gold Fields’ business could become a veritable … well, gold mine in the months ahead.

In contrast, AUY moved 6% higher on the day. 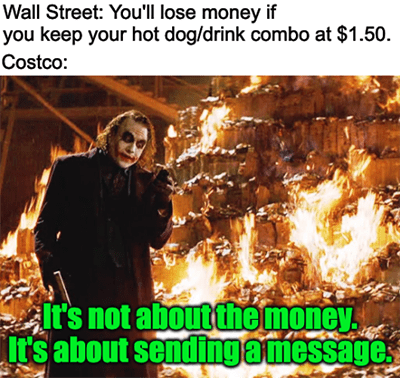 What’s the cost of customer loyalty these days? If you’re Costco Wholesale (Nasdaq: COST), it’s about a buck fifty…

See, Costco’s one of these rare retailers that’s refusing to raise prices during soaring inflation — even if it means bringing in less money than some of its competitors.

So that classic soda/hot-dog combo that’s cost $1.50 since the ‘80s? Still going strong, my dudes.

In fact, Costco is even foregoing membership fee increases amid all this inflation turmoil, much to Wall Street’s dismay. I guess institutional investors are afraid Costco’s rock-bottom margins will mar its profitability … even though all evidence points to the exact opposite, with earnings currently up 15% year over year.

Leave it to Wall Street to forget that real people respond to companies that care about their customers … and that long-term customer loyalty will always win out over short-term profitability.

Case in point: Everywhere I go, I see people drinking those tall, 23-ounce cans of AriZona tea. You wanna know why? ‘Cause they still cost $0.99 — and they’re always gonna cost $0.99.

Everything (people are) buying today, there’s a price increase on. We’re trying to hold the ground and hold for a consumer that’s pinched on all fronts. — AriZona co-founder Don Vultaggio

That’s the sign of a smart business owner, Great Ones. And if more companies took a tea leaf out of AriZona and Costco’s books, the economy would be better for it.

So even though Costco analysts are worrying over the possibility of missed expectations, the way I see it, Costco is among a small handful of retailers offering consumers stability in today’s market. And that’s why it’s the “Best” stock on our leaderboard today.

Mortgages are becoming more expensive as the Federal Reserve has begun to ratchet up interest rates, suggesting that the macroeconomic environment may not support extraordinary home price growth for much longer. Although one can safely predict that price gains will begin to decelerate, the timing of the deceleration is a more difficult call.

Welcome to another addition of “analysts who state the painfully obvious!”

In case you missed it, the S&P CoreLogic Case-Shiller Home Price Index for March hit the Street today. (Catchy name, I know.) But if you were expecting a slowdown in housing prices … you’re going to be sorely disappointed.

In fact, all 20 cities tracked by Case-Shiller saw double-digit home price increases. 17 of those saw the rise in home prices accelerate!

I think we all know that housing prices can’t keep rising for much longer. It’s not that we’re out of homebuyers or that the U.S. housing market is lacking in demand.

With home inventories near record lows, demand is the least of our worries right now.

However, homebuyers only have so much to spend on a new home right now. I mean, we’re already seeing a slowdown in home sales, which appears to be directly related to the Fed’s interest rate hikes and rising mortgage rates.

It’s almost as if homebuyers were OK paying more for a new home … so long as their mortgage rate was low enough for them to handle. Now both home prices and mortgage rates are rising.

As Lazzara says in today’s quote, it doesn’t appear that homebuyers will be able to stomach both of these factors rising for much longer.

But, in a nod to John Maynard Keynes, Lazzara also admits that the housing market can remain irrational for longer than you can remain solvent.

I know I’ve railed on the popping of the housing market bubble for a while and I still believe that a correction is coming. It’s a belief that many Wall Street analysts already hold, including Lazzara, it seems.

Where we differ is the size of that correction — right, Great One Tim P.? (You just know I’m hitting your email up this Friday.)

Any other Great Ones wanna jump in on this topic? How do y’all feel about the housing market? Are we in a bubble? Was there ever a bubble? Are we all overreacting to the housing situation?

Inquiring minds want to know! So drop us a line at GreatStuffToday@BanyanHill.com and let us know! 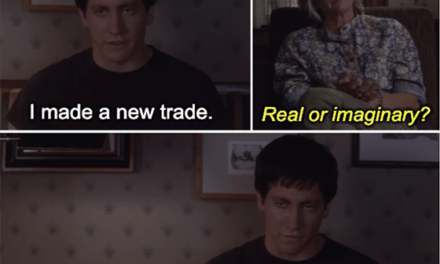 When The Market Runs In Circles, It’s A Very, Very … Mad World 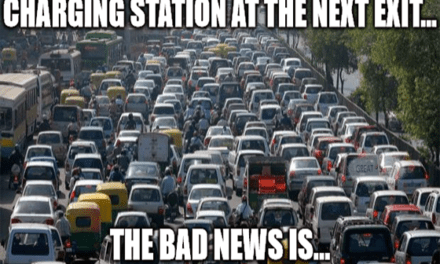