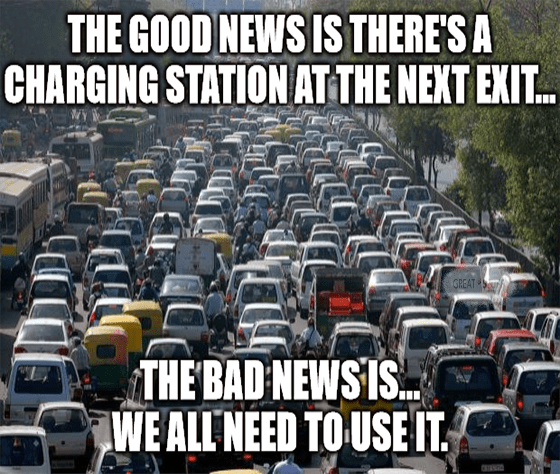 Great Ones, are you riding the lightning with Great Stuff Picks holding ChargePoint (NYSE: CHPT)?

Guilty as charged, but man, it ain’t right.

True that. There’s something else controlling ChargePoint this year, and Wall Street thinks that death is in the air. They’ve got ChargePoint strapped in the electric chair.

We’re down more than 22% on CHPT stock! This can’t be happening to me!

I hear you, Great Ones. Wall Street is really punishing growth stocks this year. If you don’t have perfect numbers, you’re done. But when it comes to ChargePoint, Wall Street is about to cut off its nose to spite its face.

I mean, did you see ChargePoint’s Q1 report?

Yeah, it’s not perfect. But ChargePoint’s results were still solid, given the considerable market headwinds.

“Positive first quarter results, despite expected significant headwinds due to global supply constraints, are a testament to the strength of our business,” said CEO Pasquale Romano.

Soaring materials costs and supply chain disruptions are clearly evident in both ChargePoint’s net loss and its shrinking gross margin. But both of these factors are temporary. Wall Street knows this full well, but … nobody on the Street has time to wait for growth anymore.

Revenue is the real data point you want to look at for ChargePoint, and that skyrocketed 102% in Q1. Furthermore, ChargePoint sales will continue to grow as Americans adopt the wave of electric vehicles (EVs) getting ready to flood the market in the next five years.

Speaking of looking to the future, ChargePoint’s Q2 and full-year guidance were impressive:

Let’s put all this into perspective, shall we?

Right now, ChargePoint is struggling with the same Chinese pandemic lockdowns, supply chain constraints and semiconductor shortages as everyone else. Despite those constraints, ChargePoint grew revenue by 102%. What’s more, the company essentially reaffirmed guidance for Q2 and the full year.

What this tells me is that CEO Romano knows this situation will be short-lived. But why would he know that?

Well, because Romano knows that the EV charging market is getting a rather big boost — about $7.2 billion — from the infrastructure bill that was passed in the U.S. earlier this year.

Right now, ChargePoint operates about 188,000 charging ports, including 57,000 ports in Europe. With $7.2 billion in federal money earmarked for building new EV chargers, we can expect those numbers to grow sharply.

And they’ll need to. Charging stations need to be as prevalent as gas stations to support the coming wave of new EVs on the road in the U.S.

That’s where ChargePoint comes in. Sure, expenses will continue to creep higher as the company builds out its charging network, but that government money should help blunt those expenses … and thus improve ChargePoint’s earnings and revenue numbers.

This is why Romano isn’t worried. This is why ChargePoint reiterated its full-year outlook, despite rising costs over the short term. This is the crucial fact that Wall Street is missing in its rush to avoid anything “growth” related right now.

And it’s why I’m not only not selling CHPT despite the market’s decline … I’m recommending you buy the dip in CHPT stock. All of the reasons we bought CHPT in the first place are still there. All of the financial drivers, all of the growth prospects — all of everything.

Now, as I said when I first recommended CHPT stock, I’m a bit of a risk-taker. Y’all probably know that by now. And we’re right in the middle of the worst risk facing ChargePoint: Wall Street’s distaste for growth.

I know ChargePoint will dominate the brave new world of EVs. I believe CHPT has the potential to more than double in price in the next year as more EVs hit the road. The company has the right business model to not only ride out the current market storm, but to also ride the EV lightning when gas-powered cars go the way of the dodo.

That said, I know not all of you have the same risk tolerance. So if CHPT stock is giving you fits or making you uncomfortable … sell if you have to. It’s your money. You do you.

Great Stuff Picks, however, will continue to hold CHPT stock. And if you have the wherewithal, now is a good time to add to your holdings.

Of course, if you’re already charged up on ChargePoint, check out what else is sparking up the EV industry.

Finding a place to charge your EV is one thing … but the No. 1 problem preventing the mass adoption of EVs is cost. For EVs, the tipping point — affordability — may finally be arriving, thanks to a brand-new battery technology.

This stunning new technology is about to cut the cost of EV batteries IN HALF … meaning by next year, an EV is expected to cost the same as a gas-powered car. 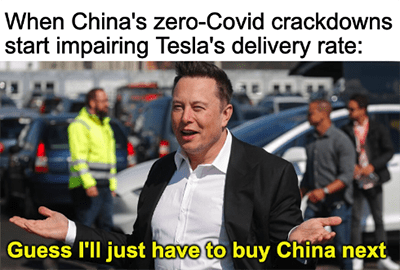 A long, long time ago, I can still remember … when Nio (NYSE: NIO) was considered to be the No. 1 EV maker coming out of China.

But after comparing Nio’s most recent deliveries update to that of its competitors, it’s becoming obvious that Nio’s not the sole EV hotshot analysts once revved it up to be.

Now, I’m not saying Nio did poorly last month, at least by its own standards. The car company managed to deliver 7,024 vehicles in May — up from 5,074 vehicle deliveries in April.

Compare that to Tesla’s EV output from China these past couple months, and Nio’s numbers look downright impressive. The problem — if that’s how you’d even phrase it this early into the EV recovery stage — is that China’s other EV producers absolutely killed it in May.

At this point, I shouldn’t have to tell you that China’s still recovering from its zero-COVID crackdowns, not to mention ongoing supply chain issues.

Dude, I know. You say this every day…

So it goes without saying that these month-over-month delivery rates look promising — especially for investors who’re already holding NIO, XPEV and LI shares.

Personally, I’m still iffy on investing in Chinese-listed stocks because of the whole information-sharing %$*#show that’s gone down in the past year.

But if you already own stock in one, or even each, of these three companies … I think it’s likely they’ll head higher after clearing this latest rough patch. Do with that what you will.

Looking For A Safer EV Investment?

Look no further. A former Tesla employee just released a brand-new innovation promising to make every EV out there instantly obsolete.

It even goes beyond EVs: His new technology is rolling out to power 50 million homes and businesses, setting up a new market 10X bigger than EVs — and you can buy in right away. 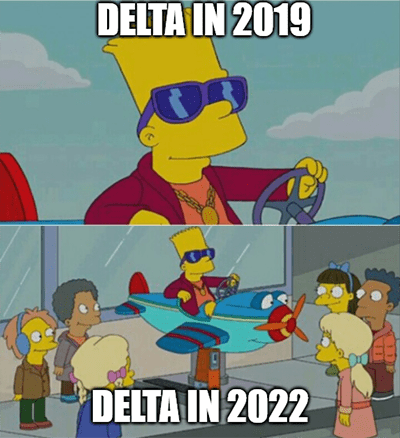 OK, so clearly I’m not done talking about Top Gun yet. I mean, didn’t you see the part where — well, I won’t spoil it all for you just yet. (But c’mon, stragglers. Your no-spoiler time is running out.)

But elsewhere in the semi-unfriendly skies, Delta Air Lines (NYSE: DAL) let slip basically everything that’s going to be on its next earnings report. I don’t know who out there gets upset over the early spoilers for corporate earnings, but there’s bound to be one of you.

Anyway, with everyone cooped up for two pandemic years, travel demand is way, way up. Who’d’ve thought? In fact, according to Delta, air traffic might be finally getting back to … normal?

Normal. Normal. What does “normal” mean?

Well … good question. In Delta’s case, it means getting back to 2019 levels of revenue, which the airline believes it will hit this quarter. Better still, Delta also raised its gross margin expectations — yes, even with the cost of fuel.

Hmmph. Maverick never worried about the cost of airplane fuel.

Bully for him, then. Still, travelers are more than willing to pay more for plane tickets than ever before just to get out of the house (or the state … you know who you are).

The problem is Delta was nowhere near ready enough to meet all this demand so soon.

The airline was already cutting its schedules ahead of time to prevent any last-minute disruptions. Such as, I don’t know, the hundreds of flights cancelled this past weekend, which every headline-writer out there is making to be an absolute travesty.

Head in the clouds, may never come down — Salesforce (NYSE: CRM) is just so hot right now.

No, really, the cloud company is up over 10% today after issuing a double beat and raise in its latest quarterly report.

A quick look at the numbers shows us Salesforce beat analysts’ estimates with an adjusted quarterly profit of $0.98 per share on revenue of $7.41 billion — up an impressive 24% year over year. What’s more, Salesforce raised its fiscal-year profit guidance to a range of $4.62 to $4.64, while slightly raising its operating margin to 20.4%.

So basically Salesforce just beat everything this quarter?

Well, nearly. The company’s still being conservative in its full-year revenue outlook for now, citing foreign exchange headwinds that could create a blustery environment for some of its cloud-based software sales.

But all in all, it’s a very strong report for the cloud kingpin — and analysts were quick to take note of Salesforce’s overall optimism.

I guess when literally every other company is screaming about economic uncertainty and inflationary headwinds, Salesforce getting candid about revenue caution for the remainder of the year doesn’t sound all that doomy or gloomy.

And with optimism in short supply these days, Wall Street has learned to take what it can get.

I can understand differences in investing strategies and risk tolerance levels. Y’all don’t have to agree with me on leading technology ideas, the metaverse, EVs, hydrogen power … I get it. 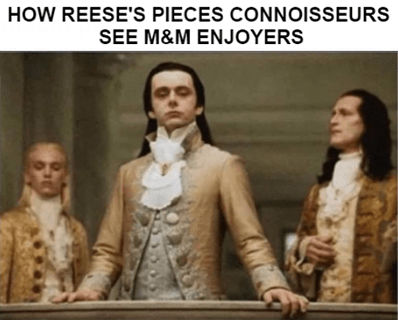 I’m disappointed that y’all could be so wrong. It should have been Reese’s Pieces, Skittles and then M&M’s.

What am I gonna do with you?

Next, you’re going to tell me that y’all ain’t gonna buy any EVs…

I know I’ve got some coal-rollers out there, and some readers who really like to work on their own cars. So EVs clearly aren’t your thing. But I’d like to think that more of you would be interested in getting off expensive gasoline and diesel. That stuff’s more than $8 a gallon in California right now.

So let’s find out. Assuming there’s enough charging infrastructure available to make it easy to “fill up” your EV, would y’all trade in your old and busted gas guzzler for an EV?

Click below and let me know!
As always, if today’s poll answers didn’t cut it for you … or you have more to say on the topic … email us at GreatStuffToday@BanyanHill.com. Rant away, Great Ones. I’m looking forward to it.

Meanwhile, you can also keep up with all the Great Stuff action you might have missed right here: 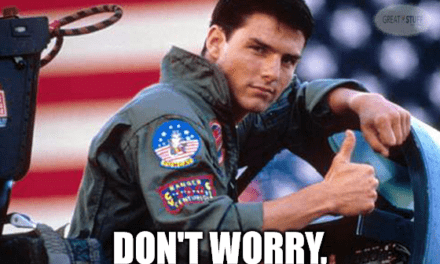 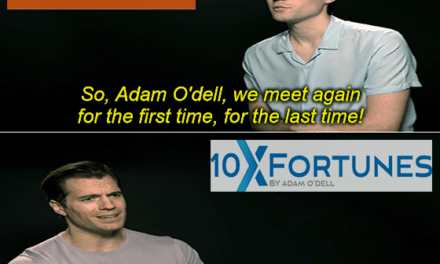