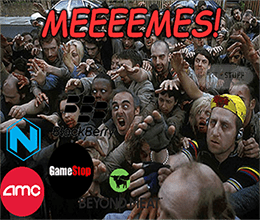 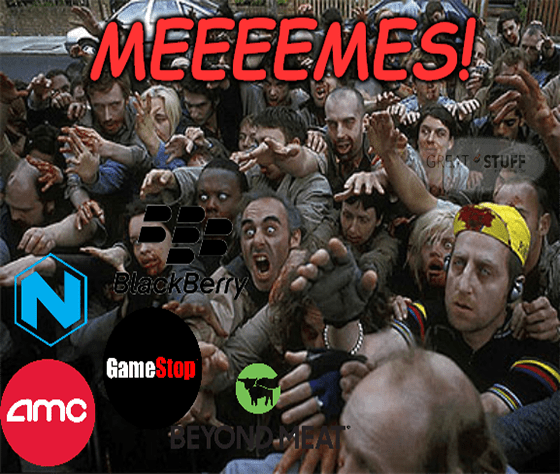 Friday Four Play: The “Night Of The Living Shorts” Edition

Hey, Great Ones… You ever feel like you’re caught in Wall Street’s version of a George Romero film?

I mean, there’s a veritable ton of zombie meme stocks running wild this week. Just look at this list of gains since Monday:

I know you’re familiar with both AMC and GameStop by now. Both have headlined the meme stock rally for the past year.

Meanwhile, BlackBerry is an on-again/off-again participant in the meme stock space.

But Nikola and Beyond Meat? Who let these two polar opposites into the meme game?

I mean, one is raking in revenue and capitalizing on a global dietary shift, while the other wants to make hydrogen fuel cell trucks … but ends up just pushing them down hills.

I’m sorry … I just can’t take Nikola seriously anymore. And while I like Beyond Meat as a long-term investment idea, I really prefer Impossible Foods much, much better. They do not taste the same, even if you close your eyes.

So … what’s up with these zombie meme stocks? Why are they rallying all of a sudden … again?

I like AMC, but the company clearly does not deserve a $12 billion market capitalization right now. And $18 billion for GameStop? Did someone let the T-Virus out again?

They’re coming to get you, Barbara!

The answer, Great Ones, is the same as it’s always been: short interest.

Same as it ever was…

AMC leads this week’s pack of short-squeeze candidates, with 30% of its float — or shares available for public trading — sold short. The rest of the pack hover at around 20% to 25% of their respective shares sold short.

That’s a lot of short selling, and retail investors driven by Reddit memes are squeezing the living daylights out of these high short-interest stocks. But we can’t blame Reddit for all of these meme stocks.

In fact, Jim Cramer had more than a little input on Beyond Meat this past week. On Tuesday, Cramer called BYND the next meme stock after pointing out live on TheStreet that more than 20% of its float was sold short. “A lot of people feel it’s very crowded,” Jim quipped.

A lot of people, huh? It’s funny that not many people were paying attention to BYND’s short interest until May 25, when Cramer threw his comment into the ring. Then the shares skyrocketed.

The bottom line here, Great Ones, is that, right now, these stocks are not for investors. They’re for speculators and gamblers. They’re for the Reddit meme crew looking to pull one over on short-selling hedge funds. It’s honestly fun to watch, but I wouldn’t want any of these undead stocks in my long-term portfolio right now.

Editor’s Note: Here’s Where That $2 Trillion Stimulus Is Really Going

And whether you agree or disagree with it, President Biden’s latest $2 trillion proposal is no different. As you can see in this urgent presentation, my colleague Ted Bauman believes it could send one relatively unknown energy stock on a tear. 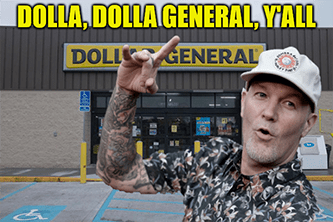 I had a weird thought today, Great Ones: There are a lot of similarities between Limp Bizkit and Dollar General (NYSE: DG). Both keep rollin’, rollin’, rollin’… and both occasionally make me want to break s%^#! I mean, those aisles are so freaking cramped.

Not everyone is a Flat Stanley, DG.

The stock soared yesterday after Dollar General reported impressive first-quarter earnings and raised its full-year guidance. I guess even Dollar General stores are experiencing a post-COVID-19 renaissance in sales.

Earnings rose to $2.82 per share while revenue dipped 0.6% to $8.4 billion. Both figures easily topped Wall Street’s expectations … because of course they did. Furthermore, same-store sales fell 4.6%, which was smaller than the 5.4% drop analysts expected.

Looking ahead, Dollar General upped its full-year earnings forecast to between $9.50 and $10.20 per share, with revenue arriving in a range of plus-or-minus 1%. Weird flex, DG, but investors loved it all the same.

The most flabbergasting thing to come out of Dollar General’s report, however, was news that the company plans to add 1,000 new stores in 2021. Dollar General already has some 17,000 stores in the U.S., with 75% of the population within just five miles of one.

I can confirm, as I currently live less than five minutes from five different Dollar General Stores!

My question is this: Where exactly are these new 1,000 stores going? I mean, I guess I don’t have one in my backyard … yet.

Will DG eventually wallpaper the U.S. with stores? When will this madness end? 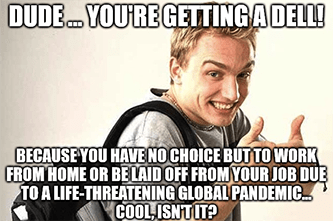 In typical fashion, Dell posted earnings and revenue that topped consensus estimates. If you’re curious, here are the numbers: Earnings per share reached $2.13 versus estimates for $1.62 per share. Revenue hit $24.49 billion versus expectations for $23.35 billion.

Driving the quarter’s results were a 20% spike in personal computer sales. 42% of that came from consumer PC purchases, which should’ve been expected with the quarter’s rolling pandemic lockdowns.

The only hitch in Dell’s giddyap was that it didn’t provide guidance for the current quarter. I suspect that Wall Street is way past all the “We’re uncertain due to COVID” excuses.

To be fair, though, Dell did not fall back on the pandemic — it just didn’t provide guidance. And in uncertain times, more uncertainty certainly didn’t help investor certainty.

DELL shares fell more than 3% on the open this morning before recovering to end down about 1.5%. As is typical in these beat-and-sell-off situations, this might be a buying opportunity for DELL … if the stock was already on your buy radar. 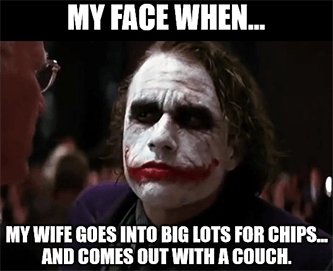 Big Lots is the peak form of discount retail — it does well when money’s tight and kinda not-so-shabby when money’s not tight. And much like Dollar General (and Limp Bizkit), I’m not a fan of the dim-and-depressing, flea market aesthetic myself, but hey, if you need to upgrade your assortment of cheap Laugh, Love, Live signs … there’s no finer place.

CEO Bruce Thorn attributed much of the quarter’s success to lawn and garden, furniture and home goods sales, as well as the company’s “strategic moves” … whatever that means. Sounds like a dad excuse for bad driving.

The company was confident enough to announce a $0.30 dividend for the quarter (which would probably get you a cartful of junk at Big Lots), but that’s where BIG’s luck runs out. The company pulled that “pandemic uncertainty” card as a reason for not giving current-quarter guidance. The Street was not amused in the slightest — sending BIG shares down 6% today. 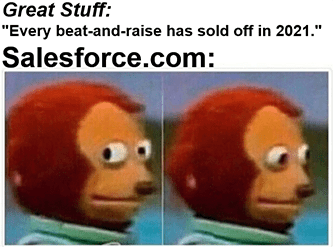 Somebody pinch me: A beat-and-raise report that didn’t end in a sell-off?

Finally! What black magic tomfoolery is going on here?

Salesforce.com (NYSE: CRM) narrowly beat earnings and sales expectations, but that was more than good enough for investors’ expectations.

Per-share earnings reached $1.21 and destroyed estimates for $0.88 per share.

The company’s revenue shot up 23% year over year, reaching $5.96 billion — right above analysts’ predictions for $5.89 billion. What’s more, that revenue growth was even sharper than the previous quarter’s 20% growth. (How many beats are we up to now?)

Now, that’s all great, fine and dandy. But one thing that sticks out to me with Salesforce is that it clearly benefits from the work-from-home environment — and even from those companies blending in-person and at-home work. I mean, this is the benefit of cloud-based software.

But I’m worried that, as more people head back into the office, this revenue growth will die down a bit and lead to selling pressure on the stock. Salesforce’s optimism sounds premature in this case, but what do I know? CRM’s over here boosting its full-year guidance and current-quarter expectations, which has the Street all hot and bothered.

I guess as long as you put on your war face and don’t blame the pandemic for uncertainty … any confidence is good confidence? Note to my younger self…

Great Ones, I have news from the future!

I predict that bright and early tomorrow morning, you will get a new Great Stuff Picks trade recommendation. I can just feel it in my bones. Don’t ask me how, don’t ask me what — OK, you can ask, but I’m not spilling the beans yet.

Just keep an eye on that inbox, and we’ll hit you with a weekend dose of Greatness before you know it. In the meantime, why not ramble on about what’s on your mind? Do you have strong opinions on work-from-home stocks, Dell devices or the incessant onslaught of our Dollar General overlords? Hit me up sometime! 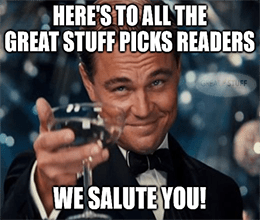 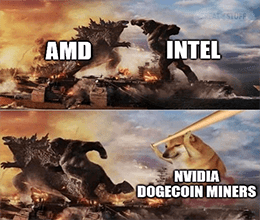 Nvidia: 1 Semiconductor That’s Sure To Rock Your Portfolio