This Surprise Fed Move Would Shock the Market Higher 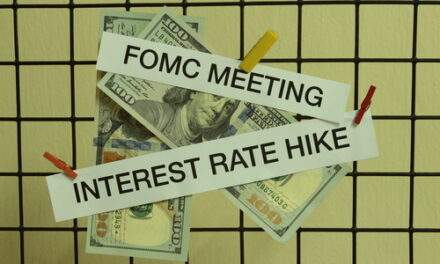 For the first time in 2022, the Federal Open Market Committee (FOMC) is holding a formal meeting.The FOMC is what we usually call the Fed. It meets every six weeks. Federal Reserve Chairman Jerome Powell holds a press conference after these meetings. We’ll see that press conference on Wednesday afternoon at 2:30 p.m. ET.Stock prices tend to be volatile on those days. That’s because Powell’s words are widely listened to, and tend to have an effect on what traders think will happen next.The initial reaction to what Powell says at this press conference will set the course for how stock prices will move for the short term. That makes it a must-see for any active trader.Today, I want to show you what to look for in this press conference so you can plan your trades well, and take advantage of the volatility it will produce.

To do this, there’s the Fed’s much more talked-about plan to raise interest rates three or four times this year. Increases are expected to start in March. The hope is the rate hikes will reduce inflation without increasing unemployment.Although it’s not part of their core mission, we do know the Fed watches the stock market. In the past three weeks, prices have plummeted, and the Fed may be tempted to try to reverse the decline.The good news is the Fed can shock the stock market into a rally, even without backing down from the plan.An interest rate hike at this meeting would show traders the Fed is serious about fighting inflation. Pushing rates up while stocks are falling would emphasize that inflation is the Fed’s top priority.This seems like it would be a death knell for stocks, which have risen comfortably from the pandemic lows in such a low interest rate environment. The market action we’ve seen lately seems to be pricing in the reality of rate hikes.But in reality, raising interest rates more than expected would actually be highly bullish for the stock market.

Raising rates now would force analysts to revise their models. Economists would probably raise their forecast for interest rates. They’d also lower expectations for inflation.In the stock market, analysts would increase earnings estimates because lower inflation would boost earnings.This is the kind of action Powell’s predecessors did at times. Alan Greenspan was almost always ahead of the market. Ben Bernanke began his tenure with a proactive policy. As the financial crisis unfolded, he started reacting to market expectations. Janet Yellen followed the market. Powell has done the same.This time is different. The Fed must show that inflation won’t continue to climb.

Waiting until March to raise rates a quarter point won’t slow inflation. Hiking by half a point tomorrow will shock the markets and could even slay inflation.We’ll know by 2:30 p.m. tomorrow afternoon whether Powell is leading or following the market.Either way, we want to trade his comments.If traders react bullishly to Powell’s remarks, call options should deliver gains in the week that follows. With the broad market so oversold, calls on almost any stock or ETF should do well. Though, the Consumer Discretionary Select Sector SPDR Fund (XLY) is the most beaten-down sector and should rally the most if the Fed acts.But if traders react by selling the news, puts on index ETFs like PowerShares QQQ ETF (QQQ) should be the best trade.Regards,

Chart of the Day:Buy Signal Imminent? 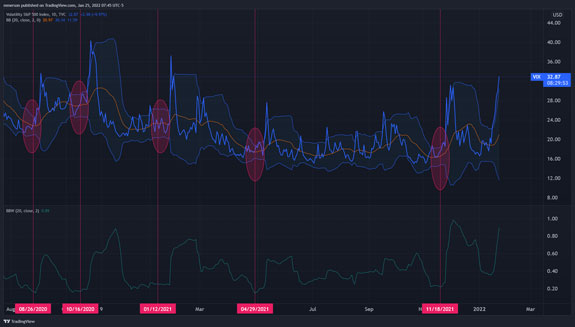 The Volatility Index (VIX) is setting up another buy signal…Those who’ve been following my Charts of the Day for a while know that the VIX isn’t really something you should trade. But it does produce lots of helpful signals for guiding trade decisions elsewhere.Right now, the VIX is above its upper Bollinger Band — a measure of volatility in a specific asset. When the VIX closes back inside its upper Bollinger Band, that sets the stage for a broad stock market buy signal.You can see this effect playing out nicely in October 2020, January 2021, May, November, and so on. Whenever the VIX popped above the upper band and closed back inside, volatility tended to fall back to normal levels.This time, especially if the Fed makes the bold move of hiking rates into the market weakness, will likely be no different. That’s a signal that overheated volatility is coming back down to earth, which would be a good sign for stock prices in the short- to mid-term.The fear of rate hikes is likely priced in at this point. While we may see a bit more selling, I think it’s more prudent to expect stocks to resume an uptrend in the near future.Regards, 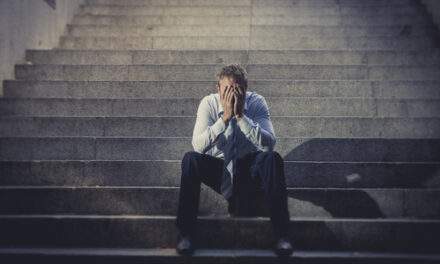 3 Tips to Ease the Portfolio Pain