Tesla Speeds Past the Competition

There is a mad dash to get ahead of the curve with autonomous driving technology, and companies such as Tesla, Toyota, BMW, Honda, Ford and many more are competing for market position.

The front-runner in this movement is clearly Tesla, which already offers self-driving hardware called Autopilot. With this feature, the driver can simply get in the car and tell it where to go; if you don’t say anything, the car will automatically search its memory to see if there is a typical place that you go that day and time, and take you there itself. The car uses GPS and its eight sensory cameras to get you safely to your destination, drop you off and park itself.

Another company that has drawn attention with its autonomous driving technology is Google, under the brand name Waymo. It started back in 2009, and although it has not come close to the 275-million-mile mark necessary to prove that its self-driving vehicle is as safe as one with a human driver, it has recently increased its self-driving fleet by 100 vehicles, and they drove 1 million simulated miles in 2016 alone. 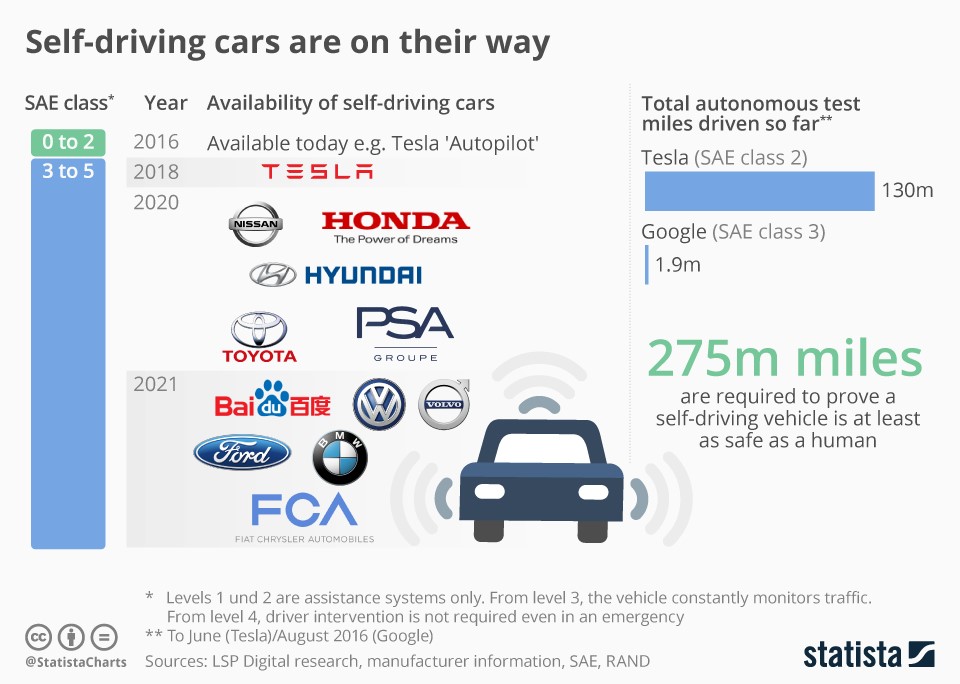 Google also recently teamed up with car rental company Avis to service its fleet of 100 self-driving minivans, as well as the 500 additional autonomous cars it plans on adding, which will help it reach that 275-million-mile mark much more quickly. (Google has already added over 1 million miles since the 1.9 million shown in the chart.)

Companies such as Google and Tesla are making autonomous driving a reality, and the transition into this field will revolutionize not only the driving experience, but also our safety on the roads. Recently, the National Highway Traffic Safety Administration determined that 94% of automobile crashes in 2015 were related to human error, mostly from and distractions such as cellphones. Once the self-driving technology is developed to the point of being mainstream, the potential to cut down the number of accidents is enormous.

The Power of Playing the Stock Price Drift Explained

McDonald’s (and You) Strike Gold With New AI