McDonald’s (and You) Strike Gold With New AI

You’ve likely heard this phrase uttered as a punch line, typically directed at the job prospects of liberal arts majors. While its current usage has become quite disparaging in casual conversation, its origins are the source of early upselling success by cashiers in the fast-food industry.

But these low-paying fast-food jobs are on their way out. Last week, McDonald’s Corp. (NYSE: MCD) announced it was replacing cashiers in 2,500 restaurants with kiosks, relegating “Would you like fries with that?” to a mere push of a button on a digital touch screen.

It was the latest salvo in an increasingly tight jobs market, one being slowly dominated by robots and artificial intelligence (AI).

For investors, the AI revolution represents an opportunity. For job seekers, on the other hand, a liberal arts degree is beginning to finally look like a solid option.

As we are seeing with McDonald’s, the move toward automation is an attractive prospect for investors. Automatic cashiers cut down on labor costs, improve accuracy and remove human errors from point-of-sale operations. The move, while representing a fraction of McDonald’s locations, was enough to prompt analysts at Cowen to lift their price target on MCD stock to $180 per share and issue an “outperform” rating.

“Our analysis suggests efforts should bear fruit in 2018,” Cowen analyst Andrew Charles told CNBC. Charles lifted his 2018 growth estimate, citing plans for McDonald’s to roll out kiosks to all 14,000 U.S. locations by the end of the year.

MCD stock hit an all-time high on the news, and while the shares are likely to consolidate those gains as investors digest McDonald’s plans, investment prospects remain impressive as the company moves further along the path toward automation. 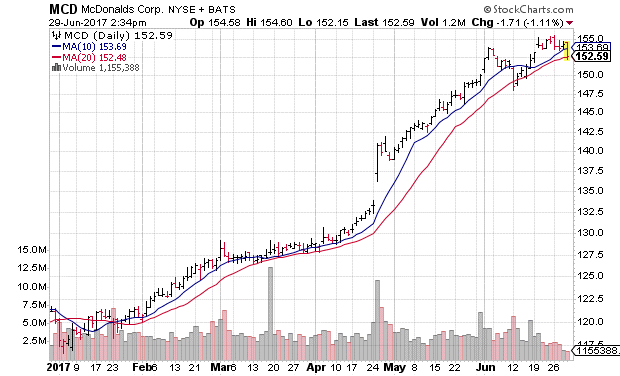 But McDonald’s isn’t the first company to embrace AI and robotic automation. Amazon has practically made it a way of life, and is even flirting with the idea of drone-hive warehouses for automated order picking, packing and delivery.

Tesla is pioneering self-driving vehicles and is even planning a semitruck for automated shipping — a movement that is gaining considerable traction, and one that could also cut costs for many companies. And both Advanced Micro Devices and Nvidia are market leaders in developing AI logic chips and the accompanying software.

For more investment tips and opportunities in the red-hot AI and automation sector, my colleague Paul and his Profits Unlimited service has you covered.

The flip side of the automation coin is employment … or rather the lack thereof. The irony of automation is that while many jobs are on the precipice of extinction — like fast-food cashiers and the 1.7 million truck drivers in the U.S. — there is one skill set that AI has yet to crack: personal judgment, critical thinking and creativity … you know, being human.

According to billionaire entrepreneur Mark Cuban, a liberal arts degree teaches this skill set and will be in increasing demand in the new autonomous economy. “Knowing how to critically think and assess [situations] from a global perspective, I think, is going to be more valuable than what we see as exciting careers today, which might be programming or [accounting], or those types of things,” Cuban told attendees of the South by Southwest conference in March.

The bottom line is that the economy is in the early stages of transitioning toward automation. Universal basic income isn’t going to save us from a nearly jobless future, but investing in companies leading the way in AI and automation is sound advice. As is preparing for a future where “Would you like fries with that?” is a thing of the past.

Editor’s Note: The Petya ransomware cyberattack has put the entire world on edge, and it has never been a better time to protect your private information. Ted Bauman’s Privacy Code 2.0 report has everything you need to know about how to keep your personal data safe from overseas hackers. Click here now to find out how to get your free copy of this essential report.

Tesla Speeds Past the Competition