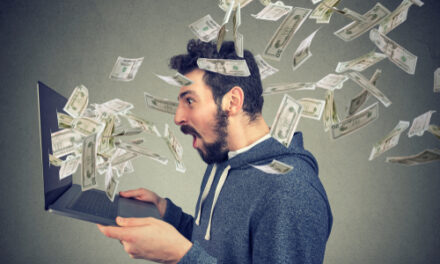 “If it don’t go up, don’t buy it.”Will Rogers was an American humorist, and this famous quote of his certainly sounds like a joke…After all, it goes against the instinct of most investors.It’s much more comfortable to buy stocks that have fallen. The prices feel like a bargain. And when a stock has already gone up, it’s easy to think you’ve missed the big move.But when Rogers said this back in the 1930s, he was actually sharing the best investment advice I’ve ever seen.And it’s not just for buy-and-hold investors, either. Traders today can make major profits playing swings in the market by following this simple principle.Let me show you how…

If They Could Do It, So Can You

Traders can and should benefit from learning history. Because even though history never truly repeats, there are always similarities that can help you determine the best path forward.So to fully appreciate what Rogers said, it’s important to understand the time he said it.Rogers said this during the Great Depression, a time of extreme inequality, when many Americans were jobless and down on their luck.Unemployment reached at least 25% at this time. But a majority of these job losses were in blue-collar jobs. 73% of construction workers were unemployed at the time, while just 16% of service workers were.At the same time, investors were just wiped out by the 87% decline in the S&P 500. But some were more fortunate, and captured a 135% gain the year after the bottom in 1929.For the rest of the decade, fortunes were made trading wild swings in the market. 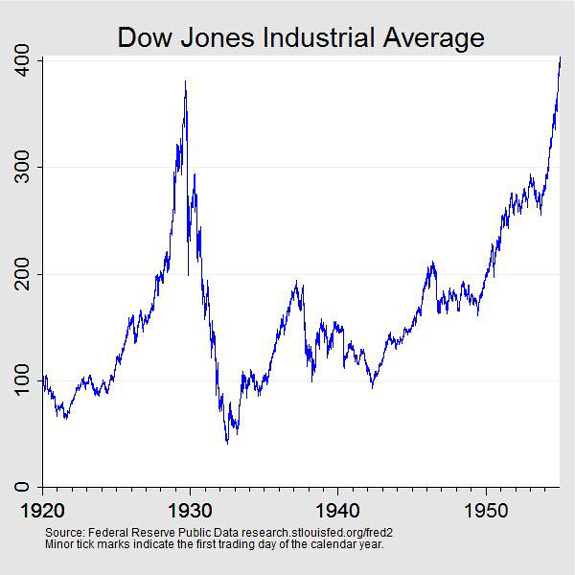 The jobless saw this and determined they could make money in stocks, if they had the capital. It was them to whom Rogers offered his advice:“Don’t gamble; take all your savings and buy some good stock and hold it till it goes up, then sell it. If it don’t go up, don’t buy it.”We may think it’s uncomfortable to buy stocks at higher prices…But imagine coming out of the worst market crash in our country’s history and risking what little cash you had to do so.If they could manage it, we certainly can.And the process is as simple as it sounds…

Momentum Shows Which Stocks to Buy

Rogers didn’t know it at the time, but he was describing what would come to be known as the “momentum anomaly” to the efficient market hypothesis (EMH).Let’s break that down.EMH says the market price is correct, because it accounts for all the available information about a stock at any given time. When traders get new information, they act on it and the price immediately changes.At its extreme, EMH says no one can beat the market.But we know that’s not true. So EMH proponents came up with an explanation: Market-beating ideas are “anomalies.”One of these anomalies is momentum.

In dozens of papers, researchers have shown that stocks that have gone up over the past few months are likely to outperform over the next few months.It’s really that simple — buy stocks that have gone up and they’ll probably keep going up.When it comes to trading, though, we want to buy stocks whose momentum is going up along with the stock price. That extra layer of confirmation gives us the best trades.Take a look at the two charts below: 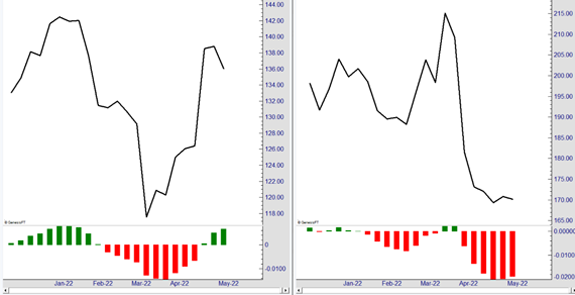 The left chart has risen over the past couple months, and the momentum indicator at the bottom is flashing a buy signal with this price rise. That’s bullish.

The stock on the right is down over 20% in the past month and a half, and the momentum indicator is still showing a sell signal. That’s not quite as bullish.

As tempting as it may be to buy stocks “on sale,” it’s the ones that persist higher through tough times that are more promising.

And as for the momentum indicator on the bottom, that’s my own invention.I designed it to throw the spotlight on situations just like these – where the price action and momentum both point to market-beating performance ahead.I’ll share more about this indicator in the coming weeks. With the volatile market, this is the exact kind of thing traders should follow to outperform.

Chart of the Day:20-Year Highs in DXY 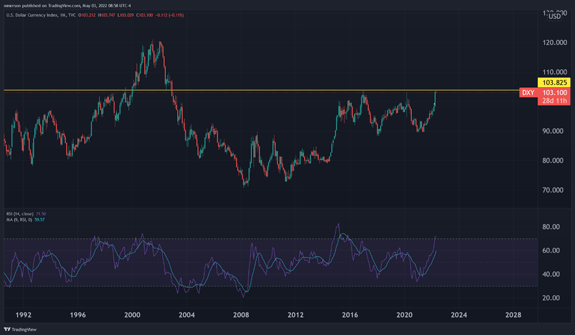 On a monthly basis, the U.S. Dollar Index (DXY) is trading at its highest level in nearly 20 years.Good sign? Bad sign? It’s complicated.A strong DXY means a lot of things, but it doesn’t necessarily mean a weak stock market. All it really means is that the dollar is strengthening against other major currencies, or that other major currencies are weakening against the dollar.That makes U.S. imports more costly for other countries, which could cause a slowdown in trade. That’s no good.But it also makes exports from other countries to the U.S. cheaper. With commodities so high, that’s a good thing for U.S. consumers.Ironically, the people who should worry most about a strong dollar are the bitcoin bulls. Replacing the world reserve currency with bitcoin means you should cheer any weakness in the greenback.DXY, as always, is a macro indicator to watch, not really something to trade. Futures are pointing to a slightly bullish open, so this breakout clearly isn’t swaying the near-term market direction. 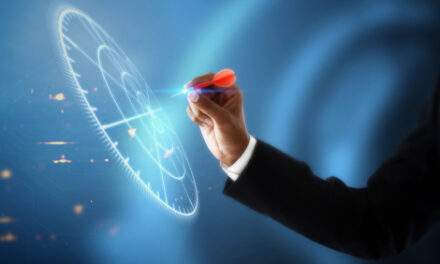 Are You Holding These 4 Big Money Targets? 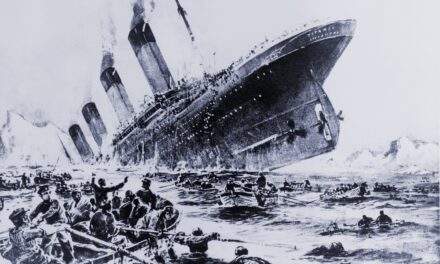