The Federal Reserve is one of the most powerful groups in the world.

It decides how much money is in the economy. Its decisions allow businesses to grow, or force businesses to contract. It also moves the stock market.

In effect, the Fed is like a superhero with special powers.

Like many superheroes, the Fed has an archenemy. The Fed decided its archenemy is inflation. And as the chart below shows, the Fed sees inflation approaching. 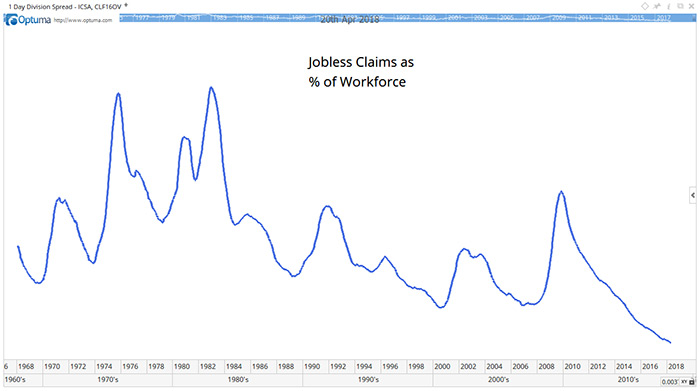 This chart shows the number of new claims for unemployment insurance as a percent of the workforce. It’s at an all-time low. The Fed believes low readings of this indicator cause inflation.

This is an important indicator. It’s updated weekly, so it provides a real-time look at the economy.

This is one of the few data series that officials update frequently. Many economic indicators report monthly or even quarterly data.

The latest new claims report was released on April 19. It included data through April 14.

For example, the widely followed S&P CoreLogic Case-Shiller Indices reports data that is 90 days old. The home market is already changing by the time we see that report.

That’s because there are few layoffs. That indicates business conditions are good.

But the Fed reads into the data. It sees the ratio of layoffs to the number of individuals in the workforce is low. That indicates there are few potential employees on the sidelines. The Fed fears this is inflationary.

When this ratio is at higher levels, there are more potential workers for the few businesses that are hiring. That means they can offer low wages and still attract qualified employees. The Fed prefers that state of affairs to current conditions.

Low levels of layoffs, as we see now, mean there are few workers available. This should lead to higher wages and higher prices.

That’s why the Fed is raising interest rates. Many of us don’t see higher wages, but the Fed is acting out of fear. It believes once inflation appears, it can’t be stopped.

Like many superheroes, the Fed relishes a fight with its archenemy. And like in many action movies, the fight creates widespread destruction, and the number of innocent victims increases.

When layoffs rise, the Fed will be happy, even if millions end up unemployed.

Why The S&P 500 Is the Most Important Stock Chart