Home » Investing » Recession or Not? These Charts Define the Problem

Recession or Not? These Charts Define the Problem 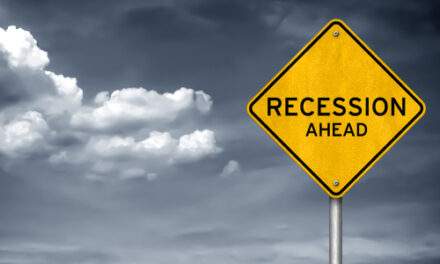 For all the time I spend creating trade algorithms and custom chart indicators, longtime readers of mine will know I’m a history buff at heart.I often can’t help but look at things from a long-term, even ultra-long-term perspective. (My prediction for the year 2120 from back in December should prove this.)So, to balance out what we’ll be discussing on Technical Tuesday, on Fridays I’ll now be flexing my macro muscles.We’ll still uncover options insights in these pages, make no mistake. But from an attack vector you likely don’t see elsewhere.What’s the macro factor at the top of people’s minds right now?You don’t need me to tell you…Oil prices are rising. This frequently leads to recessions, especially when the price rise is due to war.It’s important to understand the likelihood of a recession in the U.S. with these two factors combined. Today, we’ll try to pin down that likelihood.

The chart below shows the price of West Texas Intermediate crude oil. Data extends back to the end of World War II. 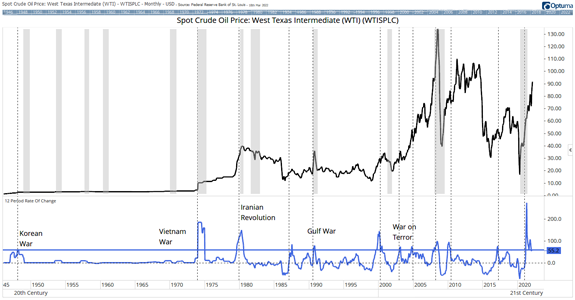 The indicator at the bottom is the 6-month rate of change (ROC) in price.ROC is more important than price. Consumers can adapt to high prices if the price rises slowly. It’s the sudden increases, like we’re seeing now, that make gas prices headline news.Sudden increases in the price of oil often coincide with major changes in the economy. Grey bars highlight times of recession. The dashed lines show times when ROC was as high as it is now.Rapid increases in the price of oil are also often associated with war. That’s because production tends to match demand for oil in the global economy. Wars create a surge in demand, and it takes time for production to catch up. The temporary shortage of oil for the civilian sector often leads to a recession.You can see that the ends of recessions are also a time when oil prices surge. This is a time when demand increases sharply, and producers race to satisfy the new demand.Not all price surges lead to recession. Likewise, not all wars lead to recessions. But the risk of recession is something traders must consider right now.

This Could Prevent a Recession

One reason the economy could avoid a recession is the fact that we don’t rely on oil as much as we did in the past. Researchers created an indicator called oil intensity to measure how much oil is needed to generate economic output.Over time, oil intensity has declined. In 1973, during the first OPEC oil shock, the world needed almost one barrel of oil to produce $1,000 worth of GDP. In 2019 (the last data before Covid) global oil intensity was 0.43 barrel per $1,000 of global GDP.In other words, we need 57% less oil today to produce $1,000 worth of productivity than we did 50 years ago. 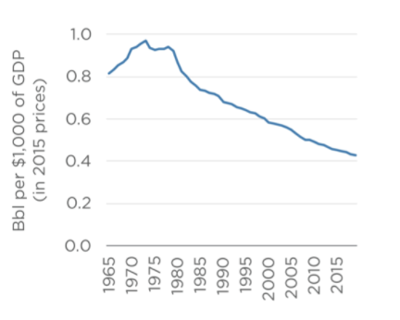 While lower oil intensity is bullish for the economy, consumer sentiment is a negative.Economist John Maynard Keynes explained why in 1936 when he wrote, “…a large proportion of our positive activities depend on spontaneous optimism rather than mathematical expectations, whether moral or hedonistic or economic. Most, probably, of our decisions to do something positive, the full consequences of which will be drawn out over many days to come, can only be taken as the result of animal spirits.”Since Keynes, economists have measured animal spirits with surveys about consumer expectations. As measured by the University of Michigan, sentiment is more negative now than it was in the worst days of the pandemic in 2020. 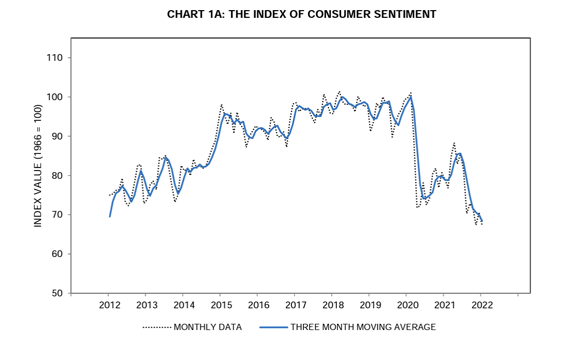 Higher oil prices will lead to higher gas prices. Every day, consumers drive by gas stations displaying the price in large numbers. Those price signs are now billboards of pain.Even those that don’t drive by gas stations might see signs for $4, $5, and even $6 gas on the news. Or on social media, which wasn’t nearly as prominent the last time we saw gas prices climb toward $4.That will adversely affect sentiment. Consumers may cut back on spending, dedicating more of their income to gas. This could trigger a recession.Traders need to follow sentiment and oil prices. The two are often opposite to each other.If current trends continue and animal spirits remain depressed, a recession is likely this year and that would mean a bear market lies ahead.Regards, 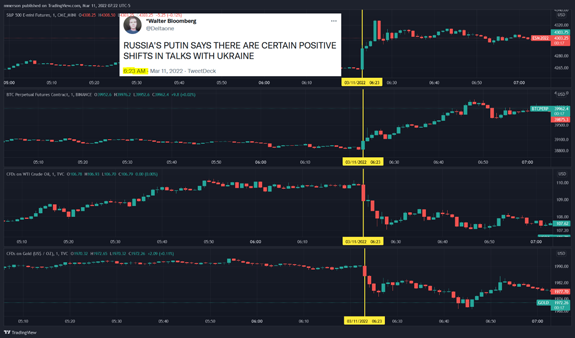 Chart of the Day? How about FOUR CHARTS… of the MINUTE?Okay, yeah, today’s a weird one. But it’s important to understand just how touchy this market is, and vulnerable overleveraged traders are, as we navigate the Russian invasion of Ukraine.At 6:23 a.m. today, infamous headline-reposting account Walter Bloomberg (@deltaone) posted the tweet above: “RUSSIA’S PUTIN SAYS THERE ARE CERTAIN POSITIVE SHIFTS IN TALKS WITH UKRAINE”.Like most Twitter accounts of this ilk, no source was provided. But this account and others like it are followed by hundreds of thousands of Twitter users, and its posts likely surface to millions of impressions. It’s influential to world markets, source or no source.And just look at the price action above for proof. The same minute this tweet went up, S&P 500 futures jumped 0.63% and bitcoin jumped 0.59%. At the same time, oil fell almost 1% and gold fell 0.27%.You may look at those numbers and think they’re small. Two counterpoints:One, these are large and liquid markets where big players use leverage constantly. You don’t want to be caught on the wrong end of a margin trade when a tweet like that drops.And two, that tweet clearly shifted the trend in all four markets. And those trends have held as I write at 7:38 this morning.Let this be a lesson: never get overexposed to one trade or another during sensitive times. Never count on things staying as they are. And even if they do, always expect a potentially misleading headline to throw a monkey wrench into the works.Regards,