Profit as Robots Infiltrate Farming With This 1 ETF 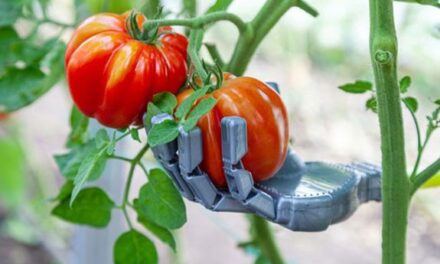 It takes a lot to get me excited about a new technology.

After all, as an economic historian, I don’t have a technological supply-side bias common in Silicon Valley.

You know the story: a scruffy young “technopreneur” or two come up with an amazing new way to do X. They’re convinced it will be a world-beater.

The problem is that the world doesn’t need a new way to do X. 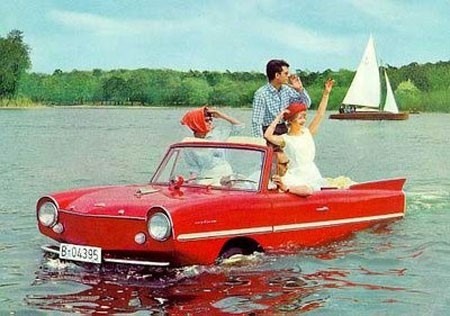 That’s why I’m constantly on the lookout for innovations that can serve an enormous unmet demand that actually exists outside the mind of the young “upstarts.” 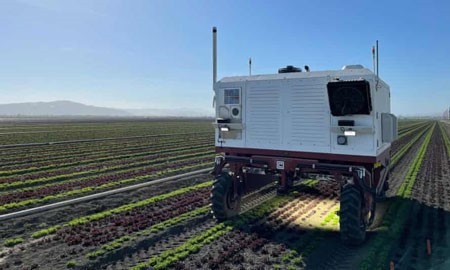 That’s an automated weeding robot that Carbon Robotics makes. It drives along rows of crops, scanning for weeds. When it spots one, it zaps it with a laser. It can destroy 100,000 weeds an hour.

Imagine the massive revolutionary potential of such a machine.

Five years ago, there were hardly any companies focusing on agricultural robotics. Now it’s growing rapidly. Experts expect the global market for such robots to increase from $5.4 billion last year to more than $20 billion by 2026. Triple the size in just six years!

That’s a huge opportunity. I feel perfectly comfortable being bullish about it … and so should you!

A Solution to (Almost) Every Problem

In yesterday’s Your Money Matters video, Angela Jirau, Clint Lee and I talked about the revolutionary potential of automation and robotics to increase productivity in the U.S. economy in the coming decade.

Increasing productivity — getting more from an hour of labor — is a solution to almost every economic problem.

In the long run, population and productivity growth drive economic growth. Given a fixed amount of capital and labor, growing productivity is the only way to increase output.

But productivity growth has an important secondary benefit that’s especially relevant right now. If it’s increasing rapidly — as I believe it will in the next few years — you can safely boost demand in the economy without fear of inflation (you shouldn’t fear inflation anyway, as I explained recently on YouTube).

That’s because we’ll be able to produce more things with the same inputs. There may be more money in the economy, but there will be more goods too, at the same or even lower prices.

And that means that employers can afford to pay wage earners more. The combination of stable or falling prices and rising wages improves living standards.

Productivity growth was the secret to the golden age of the postwar U.S. economy … the 1950s and ‘60s.

If you really want to make America great again, you should be rooting for productivity!

Once Again, Agriculture Leads the Way

In yesterday’s video, I showed this chart: 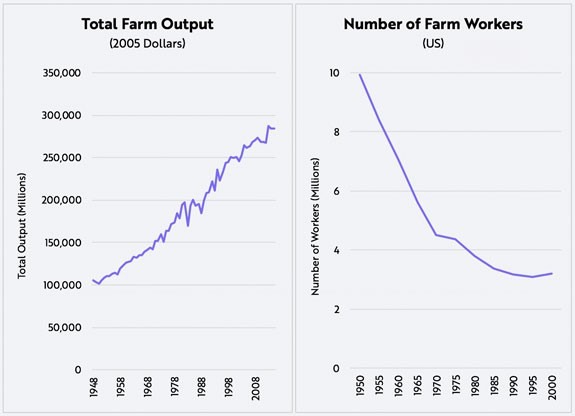 Although the process started before, after World War II U.S. agricultural productivity skyrocketed. All those factories converted to produce tanks, Jeeps and other paraphernalia of war were retooled to produce farm machinery (and, of course, automobiles).

Instead of high explosives, U.S. industry produced fertilizers and pesticides.

The result was an explosion of agricultural output, in terms of production per acre and hours of labor. Goodbye, ol’ mule team, hello John Deere.

The heavy use of pesticides led to resistance amongst bugs and weeds. Runoff from fertilizers contaminated water supplies and caused algae blooms. Constant mechanical cultivation to uproot weeds has destroyed 25% to 50% of the topsoil in the U.S. Corn Belt in the last century.

And then there’s the labor angle.

I once watched comedian Stephen Colbert testify before a U.S. congressional committee about a day he had spent working as a farm laborer picking green beans.

He, like the congressional committee, wanted to know why U.S. farmers had to rely on immigrant labor, much of it undocumented, to work the fields. Colbert told them farmers simply could not get U.S. workers to do the job, no matter how much they offered.

In classic Colbert style, he said: “Even the invisible hand of the market doesn’t want to pick beans.”

Get Ready to Play a Modern Miracle

Agricultural robotics can solve these problems.

Of course, there are still big challenges … but they create opportunities of their own.

For example, the current generation of farm robots runs on mega-polluting diesel, because there’s no infrastructure in rural areas to charge batteries. As with automobiles, rolling out that infrastructure is a huge investment and therefore a huge opportunity for investors.

I’m convinced this is going to be one of the “next big things.”

Most of the startup companies working on farm robotics are private and not listed on the stock exchange. But I expect most of them will sell or lease their technology to established agricultural machinery producers.

Earlier this month, John Deere & Company (NYSE: DE) agreed to acquire Bear Flag Robotics for $250 million. The company developed autonomous driving technology that can be retrofitted to existing tractors, seed drills, harvesters and so on.

But there’s a better way to stake your claim in this coming agricultural robotics revolution. And that’s by buying the iShares MSCI Global Agriculture Producers ETF (NYSE: VEGI).

Unlike most agriculture-focused exchange-traded funds, VEGI targets the companies that make the machinery and other inputs that global farmers use … like John Deere. 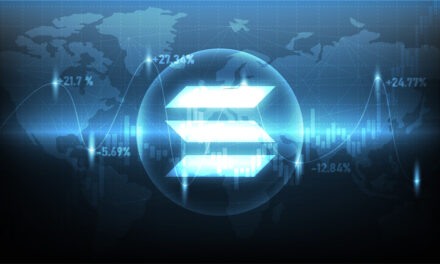 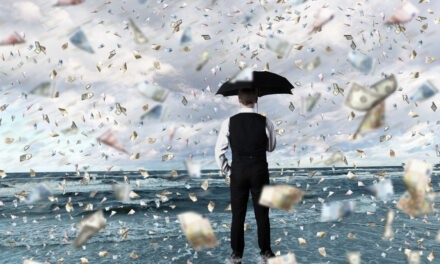 Find Refuge From This Dual Threat