Home » Investing » Options Bootcamp: A Battle of the Indicators

Options Bootcamp: A Battle of the Indicators 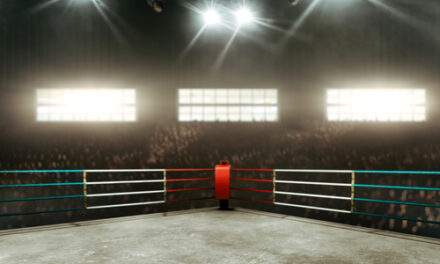 I’m very interested in the Greed Gauge. And I should be…After all, it’s based on my work.That’s right, Mike Carr. I’m calling you out.I know you built the Greed Gauge after reading one of my papers — a paper that just so happened to win the Charles Dow Award.The Dow Award recognizes research on the markets. It’s often awarded to industry veterans who have studied the markets for decades.In 2015, I won the award for an indicator I developed to sell options. I was the youngest woman in the room. In that moment, Mike and I both knew I’d officially transitioned from the military to finance.That was years ago. Our careers took us down different paths in the years since…Until recently, when Mike reached out and claimed he’d “improved” on the idea that won me the Charles Dow Award.My response? “Give me the data.”What proceeded was a head-to-head battle of the indicators… Mine vs. an early version of Mike’s Greed Gauge.And by the end of it, I knew I was looking at a bona fide options trading breakthrough.

My indicator is based on fear. But that doesn’t mean it’s simply the inverse of the Greed Gauge.Where the Greed Gauge monitors greed to see which stocks to buy call options on, I designed my indicator to sell options.It looks for times when option premiums on a stock are high, and the stock is likely to move higher. That’s the best setup for an option selling strategy.Because our indicators have different goals, the math is much different. (Between you and me, the math I used is simpler. Mike is a rocket scientist, after all.)Regardless… Mike was insisting the Greed Gauge had better returns. I couldn’t take that lying down.So, the first thing I did when I saw the Greed Gauge was propose a test.I wanted to answer one important question… Which of our indicators had the highest percentage of winning trades?For this contest, we each tested the stocks in the S&P 500 Index.We tested our signals on 20 years of data through the end of May 2022. That meant taking all buy signals and holding until the indicator turned bearish. (In real trading, of course, it’s a bit more complicated than that.)Mike and I ran the same tests on each of our formulas to be sure there weren’t any programming errors. Turns out, my indicator had 0.7% more winning trades than the Greed Gauge. A small win, but a win.Naturally, I was happy with that result and ready to call it a day…But Mike asked for a few more rounds. He wanted to compare profits per trade.Here, the Greed Gauge came out ahead. The average trade for Greed Gauge signals was 88% more profitable than my indicator. That’s a significant difference in a short-term strategy.It also delivered a higher average profit per day when trades were open — an important metric when looking at short-term strategies.Last, we turned to risk.Greed Gauge had the edge in all of the risk-reward measures we reviewed. It had a higher profit factor, payout ratio, z-score, Kelly ratio… Everything a professional trader looks for when evaluating risk.It was clear Mike had won. But that’s okay.Because I’m inspired now.I need to beat Mike at this game, and I will. In fact, I’m working on a new indicator as we speak.The moment it’s finished, I’ll be issuing a rematch.Look out, Mike. I’m coming for you…

P.S. While I’m hard at work attempting to best Mike’s Greed Gauge, you should go here and get the full story on it from Mike himself.This is, without doubt, the greatest trading indicator to use for exactly the type of market we face today. Using it, I’m confident anyone can end this bear market with more money than they started.If that doesn’t spur you into action, know this….Today is the last day to access the Greed Gauge at the special charter membership rate. You only have until midnight tonight to lock that in. Once the clock ticks past, it’s gone for the foreseeable future.So don’t delay — click here now and see why the Greed Gauge is your best bet at bear market riches.

Chart of the Day:Uranium Back in the Spotlight 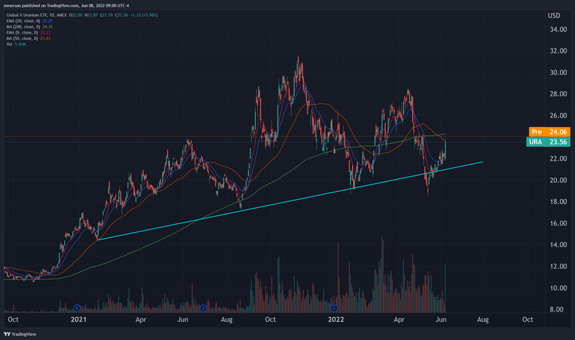 Uranium stocks are in a sloppy, choppy, slow uptrend.That’s my takeaway from both the chart of Global X Uranium ETF (URA), and a recent move by President Biden to spend $4.3 billion to boost domestic uranium production.The U.S., and much of the western world, is facing a severe energy crisis right now. With Russian oil not flowing quite so freely as it did 6 months ago, many are looking to alternatives. Nuclear power is one such alternative, feared as it is.I’ve long argued that the Western world’s path to a green future is paved with nuclear power. Biden’s move could be the first step along that path.I think we’ll see URA revisit the highs over the next several years. But, as prices are forward-looking and commodities are in a bull market, I also think we’ll see that happen whether the West makes a strong shift to nuclear in the coming years or not. 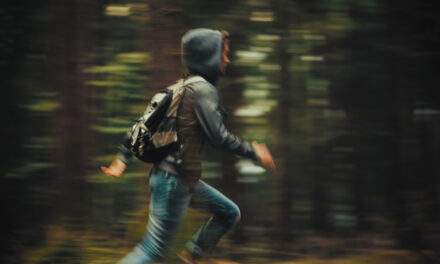 How You Can Escape the Fed’s “Teddy Bear Picnic”