Great Ones, Target’s (NYSE: TGT) a real tough cookie with a long history of breaking investors’ hearts … like the one in me.

But that’s OK. Let’s see how they do it. It’s time to put up our dukes and get down to it.

Alright, Mr. Great Stuff. Hit me with your best shot!

Bright and early this morning, Target warned investors that profits would be down over the short term. Specifically, Target cut its Q2 operating margin to just 2%. That’s down from the roughly 5.3% operating margin the company forecast less than three weeks ago with its Q1 earnings report.

If y’all remember correctly, TGT stock was smacked hard for that report. I mean, the company missed on earnings and cut guidance due to soaring costs and inflation.

Furthermore, Target said that raising prices would “be the last lever we pull” in order to maintain value and shopper trust.

As part of its move to cut profit margin expectations, Target said it will deeply discount and mark for clearance a whole host of products consumers just aren’t buying anymore.

We thought it was prudent for us to be decisive, act quickly, get out in front of this, address and optimize our inventory in the second quarter — take those actions necessary to remove the excess inventory and set ourselves up to continue to be guest relevant with our assortment.

Basically, Target saw competitors like Walmart, Gap and American Eagle struggle with an overabundance of inventory that consumers wanted during the pandemic … but not anymore.

For example, sweatpants and hoodies were clearly in demand during the pandemic lockdowns … but consumers can’t really wear those in the office. So more business-casual wear is in demand now.

But with inventories filled with pandemic-related goods, retailers like Target have little to no room to handle new products.

But! But! Supply chain! I thought no one had any products because of supply chain issues.

Retailers didn’t have the products you wanted during the pandemic due to slow supply chains, but they finally got all that stuff now that the pandemic lockdowns are easing. Unfortunately, consumers no longer want those products — and retailers paid a pretty penny to get them in the door.

This is what Target is getting out ahead of. It’s already seen Walmart and other major competitors struggle with high levels of unwanted inventory and it’s trying to not make the same mistake.

So Target is cleaning house now — not later.

It’s deliberately taking a direct hit on the high-cost merchandise it expedited during the pandemic in order to clear shelf space for products consumers actually want.

And Target’s doing this by slashing prices on this merchandise, while simultaneously keeping the prices of all its other products as restrained as it can. 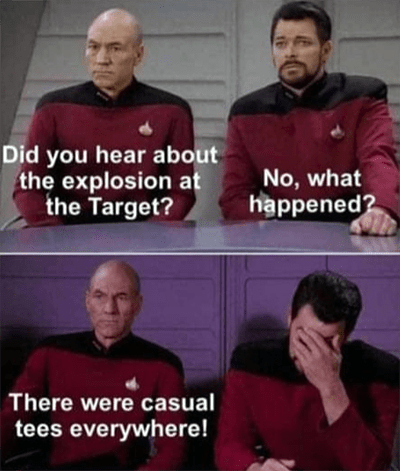 In short, Target is eating the cost of supply chain disruptions and soaring inflation as a means to keep prices lower for its shoppers.

Looking at TGT stock, the shares are down 33% this year and are about 42% away from their all-time high. Given that Target forecast operating gross margin of 6% for the back half of 2022 and revenue growth in the mid-single-digits for the full year, this sell-off looks like a potential buying opportunity.

For clarification, I’m not recommending TGT stock for the Great Stuff Picks portfolio. But it is now on my shortlist of potential stocks to buy when the time is right.

Ian King has a surprising answer for all the people who’ve written in to him asking if now’s the time to start buying Bitcoin: You’ve already missed out.

That’s right. Bitcoin minted 100,000 millionaires in its heyday … but if you’re not one of them, that ship has already sailed.

But there’s another millionaire-minting crypto at our doorstep: the “Next Gen Coin.”

According to Ian’s research, this coin will be 20X bigger than bitcoin. And it could create as many as 2 million new millionaires.

For Ian’s full breakdown of this Next Gen Coin, click here for his exclusive interview. 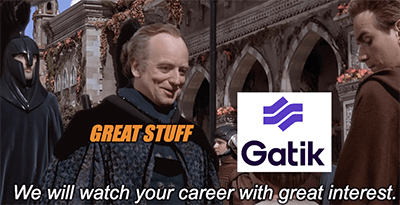 And for good reason: We’ve only mentioned Gatik once before in Great Stuff history.

After today, though, I’ll be watching Gatik’s career — and I can only assume its eventual move to go public — with great interest.

See, Gatik has apparently been running a stealth delivery operation for some of Walmart’s (NYSE: WMT) southern branches in Arkansas and Louisiana.

And it’s done such a shipshape shipping job at those facilities, Walmart’s now entrusting Gatik to deliver goods for 34 of its Sam’s Club warehouses in the Dallas-Fort Worth area of Texas. Talk about a promotion.

Now, Gatik’s self-driving startup still isn’t being entrusted with the crown jewels of Sam’s Club’s catalog. There are no flat-screen TVs or raw shrimp platters in these big-rig trucks … not yet anyway.

Full-scale autonomous delivery is still years away, to be sure. But the implications here are enormous.

In the not-so-distant future, AI tech will have become advanced enough that it can automate many of our big-box delivery needs (at least for repeatable routes to and from the same stores and warehouses.)

Ian King has been saying for a while now that AI is “becoming the most transformative technology humanity has ever developed.” But it’s one thing to simply read about it … and another thing entirely to see it in action.

To see more real-life examples of AI tech at work — and a company that’s at the forefront of this high-growth industry — click here for more details.

After months of playing the field between its many department-store suitors, longtime bachelorette Kohl’s (NYSE: KSS) signaled it might finally be ready to settle down after all.

It’s not that Kohl’s has a fear of commitment, per se. It’s just that as a well-raised retailer, Kohl’s knows its own worth — and after operating for many years as a stand-alone shop, it’s not willing to settle for anything less.

So those mid-$50s per share bids Kohl’s received from private equity firm Sycamore Partners? Yeah… Not even worth the dirt on this department store debutante’s shoes.

Never mind that Kohl’s is currently participating in one of the worst-hit sectors of the economy, during what’s becoming an inflationary tipping point for middle America. No, no — somehow Kohl’s still values its ragtag retail chain somewhere in the $8 billion range…

And holding company Franchise Group (Nasdaq: FRG) is so crazy in love with Kohl’s, it just might pay a reverse dowry of that exact sum to win the retailer’s hand in marriage.

Now, I’m not one to judge or anything — and I know they say opposites attract — but even I did a double take at this particular pairing.

I mean, Franchise Group’s businesses include The Vitamin Shoppe, Badcock Home Furniture & More, Sylvan Learning and Pet Supplies Plus. That’s an unusual assortment if I’ve ever seen one. And now it wants to add Kohl’s into the mix?

Idk, fam. I’ve seen stranger couples before … but considering Kohl’s’ main reason for staying single so long was to find a partner that truly “understood its core business” … maybe it should’ve just settled down with JCPenney after all.

Should this marriage go through — and then dissolve further down the line — the kids, erm, shareholders would be devastated. KSS investors, for your sake, I hope there’s a prenup.

If you’ve been reading your Great Stuff on the regular, then you already know that lending companies like Affirm (Nasdaq: AFRM) have been one of our hot-button topics this past year.

Who can withstand those fresh-off-the-presses “buy now, pay later” buzzwords … especially as the economy slowly circles the toilet and everything becomes more expensive to buy? Seems like a match made in retail heaven hell if you ask me.

Well, things had been going pretty well for Affirm until Apple (Nasdaq: AAPL) decided to take the lending community down a notch and launch its own “buy now, pay later” service called Apple Pay Later … so original, I know.

Logic says the launch of this latest service could entice more companies — especially those in the Big Tech biosphere — to bring more lending options in-house, especially if they already have a payment app infrastructure.

Indeed, Apple does like to make a mess of things for other tech companies, doesn’t it? But if we’re being honest, we all should’ve seen this coming from a mile away.

After all, these “buy now, pay later” companies have no moat — meaning there’s no barrier to entry for any of their services. A lot of big tech and bank companies can easily offer the same setup, skipping the middleman altogether.

That’s why I never understood why Wall Street was so hot for these third-party lenders — and why I never once considered adding one of them to the Great Stuff Picks portfolio.

And while Affirm’s stock rebounded today on news of Apple’s payment plan, I don’t see it faring well in the future if more companies follow Apple’s lead.

This could be the first major sign of trouble for lending companies moving forward … so don’t say you weren’t warned if one or more of these stocks have a place in your portfolio.

If the Emperor of Mars doesn’t want you, I’ll be happy to bring you over to #AWS.

Here’s your crown, King Nothing…

Great Ones, y’all know that Mr. Musk has had a number of nicknames of in these here virtual pages. “Emperor of Mars” might be the best of them all (sarcastically, of course).

While Tesla is literally trying to scare its employees into quitting, thus culling the herd without any severance pay … Amazon is ready to snatch up that lost talent:

If you don’t like to be micromanaged by the Elon Musk’s of the world, come to #AWSIdentity! We’ll find you a happy home here that respects you, your time and your profession. We will find you a team that treats you with dignity.

Now, I’d take this a lot more seriously if it didn’t come from Amazon. (Rattle your tracking bracelets and blink twice if you agree!) 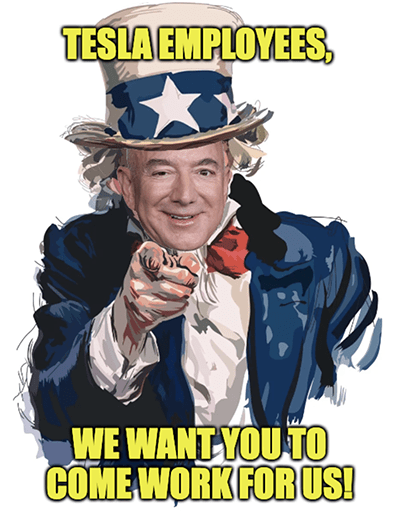 But as Amazon’s cloud and web tech arm, AWS is a slightly different beast. Amazon warehouses might be running out of humans to fill its worker drone roles, but AWS could always take on new cloud-programming techies. Especially in this job market.

The best way to attract attention to your job postings? A: Throw shade at Elon Musk. And B: Give people the agency to work where they work best … unlike Elon.

Amazon’s message to Musk is clear: While you were hokey-pokey-ing your way in and out of Twitter … your best and most talented workers saw the sign on the door.

In one letter, Musk further exposed how self-involved his worldview actually is: Tesla’s success is because he spent time on the factory floor … not to mention anything of the thousands of other factory workers alongside him.

Your contributions? Not enough! I need more — give me production to satisfy!

Let me know in the inbox: How would you feel if you were knee-deep in work some afternoon and you get an all-call from the CEO telling you to pretend to work somewhere else? Yeah … I’m gonna go with “not enthused.”

Before you ask, don’t worry. Anything tangentially related to Amazon won’t be the pinnacle of worker/employer relations … not in my book. And I have some doubts about any recruiter trying to draw people in to “happy homes” at their company, but I digress.

Anyway, if you’d like to chime in on the Amazon versus Elon banter, join in the inbox. Drop us a line at GreatStuffToday@BanyanHill.com and let us know! 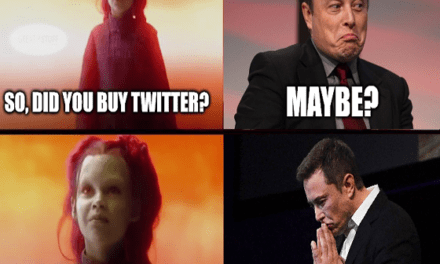 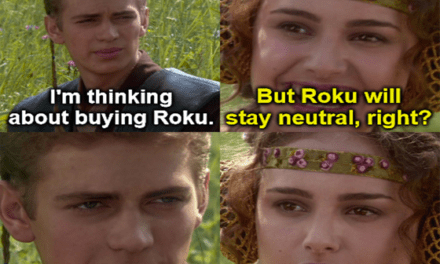