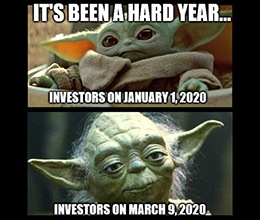 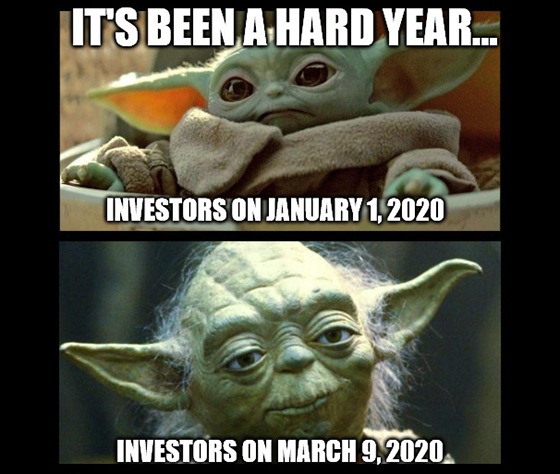 Well, you can say one positive thing about 2020 so far: It hasn’t been boring.

So far, we’ve seen a U.S.-China trade war, World War III threats, Australia on fire and a global pandemic. And it’s only March.

But wait … there’s more! This weekend, we saw the beginning of an all-out brawl in the oil market between Saudi Arabia and Russia. It’s been the most devastating news to the markets yet.

In fact, the markets plunged more than 7% across the board this morning, triggering market circuit breakers and halting trading for the first time since December 2008.

So, what led to the market’s 15-minute timeout?

In case you missed this weekend’s events, here’s the lowdown:

OPEC collectively agreed to cut production to support oil prices amid slackening demand due to the coronavirus. At the OPEC+ meeting this weekend, however, Russia refused to agree to OPEC’s Saudi-led plan.

Russia’s refusal incensed the Saudis, who then initiated a scorched-earth policy to attack Russia’s oil market share. The Saudis slashed oil prices this weekend, essentially promising to open the taps on oil production. Crude oil for April delivery plunged as low as $27.39 per barrel following the news.

With oil demand already waning due to the coronavirus, the Saudis’ market flood creates “complete pandemonium,” according to Stephen Innes, chief market strategist at AxiCorp. “The shock-and-awe Saudi strategy will propel oil markets into a period of radical uncertainty. Russia balking was one thing, but Saudi ramping up production is a bird of another feather.”

I know that you’re tempted to. But if you’ve followed along with Great Stuff, you’re in a better position right now than almost everyone else in the market.

As a Great Stuff reader, you are prepared.

You moved into bonds and gold on February 27, when Great Stuff suggested the iShares 20+ Year Treasury Bond ETF (Nasdaq: TLT) and the SPDR Gold Trust (NYSE: GLD) exchange-traded funds (ETFs) as fallout shelters from the storm. (We’ve talked up gold and bonds for a while … so, maybe you got in earlier?)

You also got defensive and checked into currencies with the Invesco CurrencyShares Swiss Franc Trust (NYSE: FXF) back on February 18.

Furthermore, you also sit on healthy gains from Great Stuff’s 4 Stocks to Beat the Wuhan Virus. We already closed out one of these stocks for a 300% gain, and we’re ready to close out another triple-digit winner today! (More on that in a bit.)

However, today’s plunge shows us that now’s not the time for complacency. The coronavirus is still spreading. We went from about 28 cases in the U.S. last week to more than 560 as of this morning. Oil prices will continue to fall as Saudi Arabia implements its scorched-earth policy against Russia.

While I believe it’s too soon to start sounding the recession horn in the U.S., that’s certainly one potential result of this scenario. And you must be prepared.

Not only for a potential extended decline from here, but also to take advantage of any rising opportunities or potential bargains the current market uncovers.

As longtime readers may know, I spent nearly three years working with Banyan Hill expert Ted Bauman. Ted is an asset protection and portfolio diversification guru if ever there was one.

And if anyone can help you prepare for this market nightmare, it’s Ted.

I mean, the man’s told his readers how to prepare for months now…

Ted’s readers in The Bauman Letter have diversification and disaster prep at their fingertips. Not only do Ted and company share all the must-have tips to better protect your assets, they find standout opportunities to jump on while the market bleeds like a stuck pig.

Is it too late to prepare for today’s crash? Well … yes sirree, Bob.

But don’t wait another day to prepare for volatility.

Click here to learn how to protect yourself — and generate income in the meantime — with Ted in The Bauman Letter. 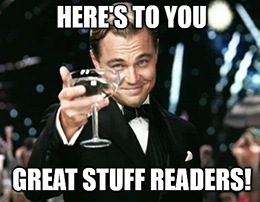 Last week, Inovio Pharmaceuticals Inc. (Nasdaq: INO) stock went on a rampage. The company announced that it would begin human clinical trials for its COVID-19 vaccine in April. The vaccine (INO-4800) would also begin clinical trials in China and South Korea shortly after.

The kicker? Inovio said it could have 1 million doses of INO-4800 ready by the end of the year. That put the stock in the hot seat for every investor on Wall Street.

Inovio was one of four stocks that Great Stuff recommended as “No Fear Here” investments for the coronavirus. As of this writing, INO was up more than 200% since we brought the company to your attention.

If you bought into INO following Great Stuff’s recommendation, we officially recommend that you sell today.

Once again, we’re taking the money and running. There’s no need to get greedy — especially in this market, when things change without a moment’s notice.

That said, I know that you’ll do whatever you want to do…

If you plan to continue to hold INO, you should know that Inovio reports quarterly earnings results this Thursday, March 12, after the close of trading. This may be something good for the stock, or it may be something bad. That’s just it: We don’t know.

So, if you’re set on holding INO to see just how high the stock will run, do yourself a favor and take half of your position off the table now. That guarantees you a win and leaves you set to benefit from any further gains.

Congratulations on another great trade!

Did you get in on Inovio? Let us know at GreatStuffToday@banyanhill.com. 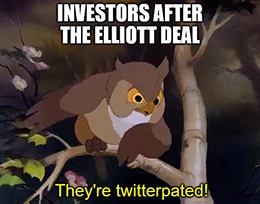 Last week, activist investor Elliott Management announced that it was sick and tired of Jack Dorsey two-timing Twitter Inc. (NYSE: TWTR). Dorsey, you see, is the CEO of both Twitter and Square Inc. (NYSE: SQ). And Elliott thought Twitter could do better with a more focused CEO.

In typical Wall Street fashion, the two sides have resolved their issues … with money and board seats. Tech investment fund Silver Lake dumped $1 billion into Twitter this weekend. But the $1 billion came with strings attached.

In an agreement with Elliott Management, Twitter will use that investment to help fund a $2 billion share-repurchase program. Additionally, Silver Lake and Elliott will each contribute a representative to Twitter’s board. Twitter’s also searching for a third independent board member to help the company “build a service that delivers for customers, and drives value for stakeholders.”

So, it looks like Dorsey gets to live another day as Twitter’s CEO. With how well the company has performed recently under his leadership, this is a good thing. 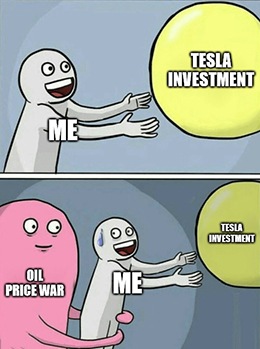 Today’s more than 10% plunge, however, strikes me as quite odd. The argument goes that Saudi Arabia’s oil pricing war with Russia will make gasoline cars more attractive due to low, low prices at the pump. Analysts project $20-per-barrel oil, after all. For much of the U.S., that means gas under $2 per gallon.

This logic worked just fine … back in the day.

But now, world governments and an entire generation of millennials are focused on climate change and sustainable energy. Low-cost oil won’t end that movement. Furthermore, we all know that either Russia or Saudi Arabia will blink eventually. Oil and gasoline prices must go back up at some point.

This price war offers a brief respite for those of us still driving combustion engines. But it also offers discounted prices on alternative-energy stocks such as Tesla and a whole host of other alt-energy companies getting slammed today.

Right now may not be the right time to buy, but keep these companies on your radar. Their time will come sooner rather than later. 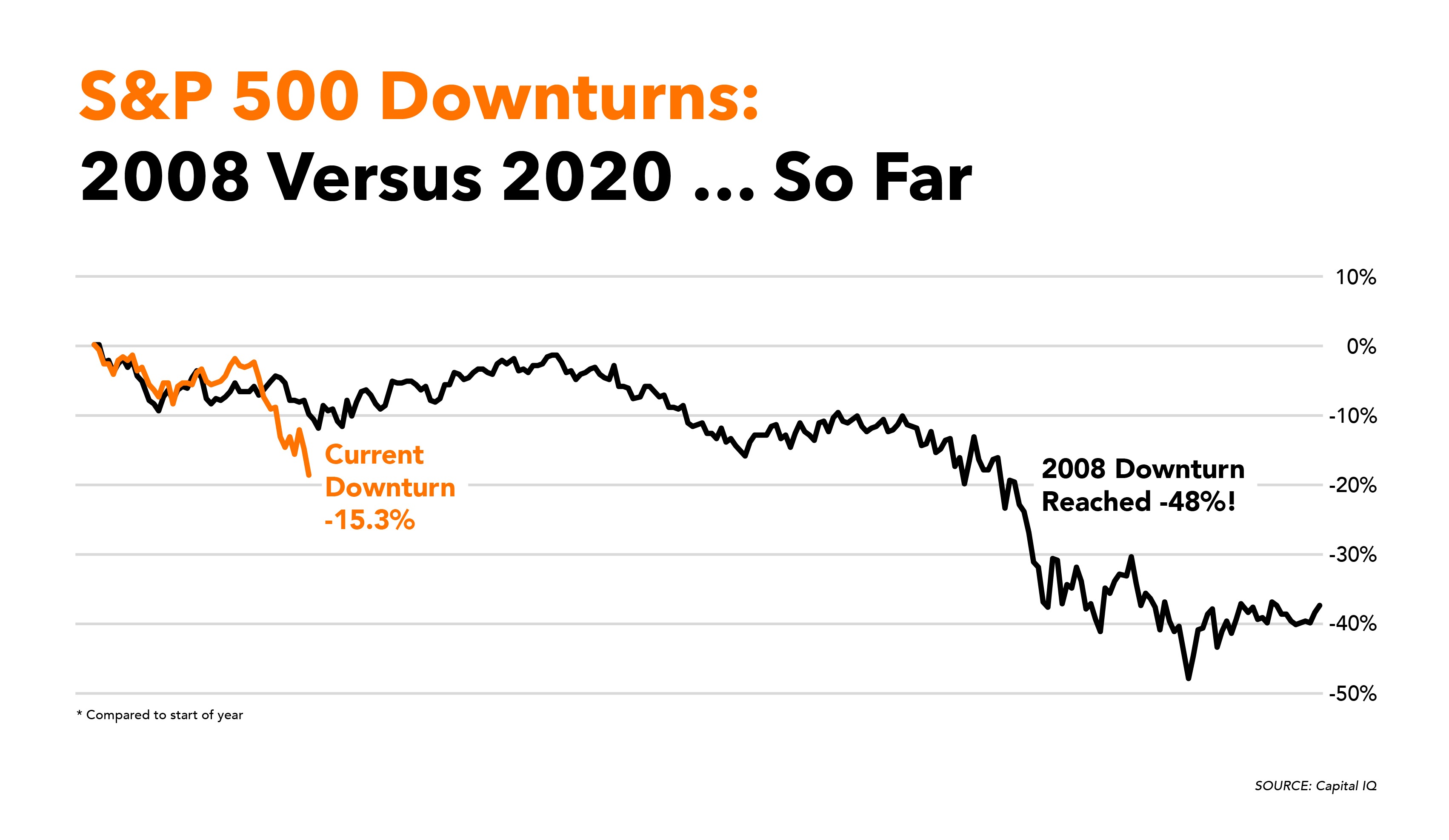 That’s one scary chart. What you’re looking at is a comparison between the S&P 500’s crash during the 2008 financial crisis and the 2020 coronavirus/oil price wars correction.

Now, you may look at these data and think: “Oh, it’s so much worse this time!” But you’d miss a critical point. The 2008 crash was a systemic problem in the global financial system. It took years to fully correct.

The current correction isn’t systemic. It’s pure, unadulterated panic. It’s a reaction to years and years of built-up hype and bullish sentiment driven by easy money. This is a sentiment collapse. The coronavirus and the oil price war are just excuses driving a correction. We all knew it’d come sooner or later.

At the end of this panic selling, we’ll find a market with much more reasonable price-to-earnings ratios. We’ll find more opportunities for growth. We’ll find that the companies we’ve held on to — those well-run firms in mega trend markets — will recover just fine.

And since you’re reading Great Stuff, you’ll have the cash on hand to take full advantage of the situation when the market rights itself — sooner rather than later.

So, hang in there. Keep reading Great Stuff and BanyanHill.com. Remember: This too shall pass. 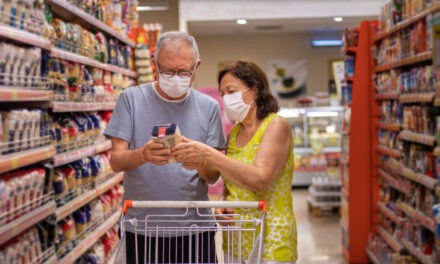 Here’s Why There’s a Pumpkin Shortage