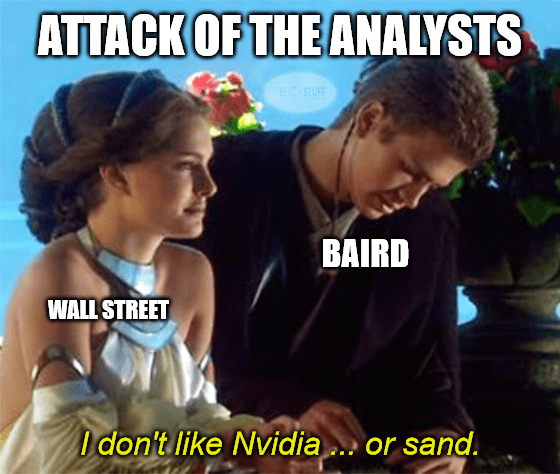 Great Ones, I was walkin’ on Wall Street just the other day, baby. What do you … what do you think I saw?

Crowds of analysts sittin’ on the grass with flowers in their hair?

It seems you already know the score. Yeah, you know how it is. I really don’t know what time it was. So I asked them if they could talk about Nvidia (Nasdaq: NVDA) a while…

But … tech and this market? I’m pretty sure you can guess the answer at this point.

So why does Gerra not like one of the most-liked stocks on Wall Street?

I mean, 36 of the 44 analysts following Nvidia rate the stock a buy or better, with only six holds and just two underperforms … not even a sell in the entire group.

Well, according to Gerra, it has to do with demand for GPUs, or graphics processing units.

Gerra said he knew this was happening because of falling GPU pricing in the market. Well … at least something is becoming less expensive right now, am I right?

But why did it have to be my NVDA stock?

Again, according to Gerra, part of the problem is China’s COVID-19 shutdowns, which are hurting both demand and production.

Another part of the problem Gerra sees lies with the Russian invasion of Ukraine. In fact, Russia “likely represents a larger percentage of consumer GPU than the consensus view, driven by both gamers and mining.”

There are certainly a lot of Russian gamers and crypto miners, but could that be enough of a hit to Nvidia’s bottom line to justify a downgrade and a 37.5% price target cut?

Gerra certainly thinks so … but I, naturally, have my doubts. What Gerra is focusing on is short-term demand. In other words, this driving factor in Gerra’s downgrade is only temporary. This too shall pass.

And even Gerra himself thinks so: “Despite a hiccup in consumer GPU demand this year, we expect RTX upgrades to represent a continued catalyst medium term, along with AI and software opportunities.”

Now, I know some of y’all aren’t that jazzed about the metaverse or virtual reality … but you have to admit that AI possibilities have you on the edge of your seat. We’re talking everything from self-driving cars to health care to energy conservation to gene sequencing to manufacturing.

AI is practically — and virtually — everywhere.

Right now, Nvidia is one of the biggest players in all of these markets … especially AI. So when an analyst tells you they don’t like a stock because of short-term demand issues with one of its products … should you sell? Especially when said analyst really likes the company’s long-term outlook?

Nah, fam. We hold. And if you go down on Wall Street today, baby, you better … you better open your eyes. So don’t pack your bags for the Misty Mounts, Great Ones, over the hills where the dead trades fly.

That’s exactly what we’re going to do with NVDA stock in the Great Stuff Picks portfolio. This is a long-term trade … always has been.

But if you’re looking to squeeze even more juice out of the AI market, we’ve got you covered there too. (And no, we’re not going anywhere near Tesla’s “totally not a Terminator” plans for AI robots.)

Adam O’Dell says there’s a little-known stock at the center of all this AI action.

In fact, this small-cap stock is currently trading for less than it costs to buy a tank of gas — giving everyday investors the chance to get in on the ground floor of what could become an $80 TRILLION industry over the next 10 years. 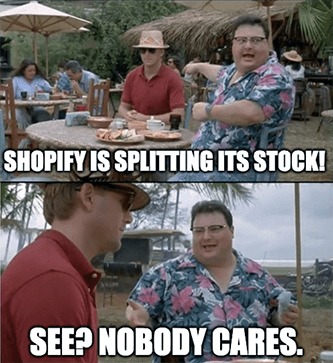 What better way for Wall Street to wake up on this fine Monday morn than with yet another stock split? Seriously, it’s like all these Big Tech companies have nothing better to do than to slice themselves into infinitely smaller pieces.

Lütke would feel a whole lot better with 40% of the company under his control, which is what he’ll have if shareholders approve Shopify’s appeal.

Riiiiiiight. And all of this has absolutely nothing to do with SHOP stock being down 55% year to date following those stimulus-induced shopping sprees at the height of the pandemic … a high that Shopify continues to chase.

Maybe the e-commerce giant really will feed that fix following its stock split … but given Wall Street’s lackluster response to today’s announcement, something tells me investors ain’t gonna SHOP until they drop. 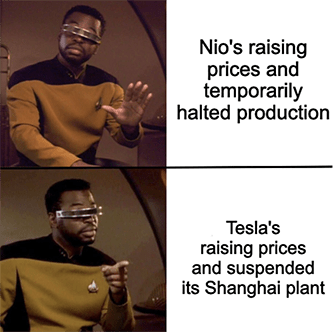 Remember how I said last week that Tesla’s (Nasdaq: TSLA) cult of personality is what pushed the company’s share price higher … despite first-quarter deliveries being lower than Wall Street’s lofty expectations?

And y’all remember how other car companies continue to get punished for minor mishaps that are out of their control — such as semiconductor shortages and supply chain issues — while Tesla gets a free pass?

Common sense says that all car companies will feel a similar penchant for pain until circumstances change and market conditions improve … but that’s clearly not the case here.

I mean, TSLA rallied last week on some seriously negative news. Meanwhile, NIO stock is sinking like a stone today on what are arguably the same setbacks.

And yet you wanna tell me Tesla’s not a “cult stock?” Ha…

Editor’s Note: Biggest Breakthrough Since The Discovery Of Oil

A tiny Silicon Valley company is using AI to unleash the largest untapped energy source in the world.

My colleague just recorded a free video where you can get the whole story, as well as the details of the company that’s central to this breakthrough. Click here to see more.

Great Ones, if there was an award for “most indecisive individual of all time,” Elon Musk would give Ross Perot a serious run for his money.

After flexing his antisocial media might last week and announcing that he would join Twitter’s (NYSE: TWTR) board of directors, the Musk Man made up his mind to … you guessed it … not join Twitter’s board after all.

I swear, all this “will he or won’t he” is giving me whiplash…

According to Twitter CEO Parag Agrawal, Elon didn’t give a reason for backing out of the deal and abandoning his board seat. But the disappointment following Musk’s move is clear enough:

We were excited to collaborate and clear about the risks. We also believed that having Elon as a fiduciary of the company where he, like all board members, has to act in the best interests of the company and all our shareholders was the best path forward.

Reading between the not-so-subtle lines, Twitter execs wanted Elon to join their board so he couldn’t buy more shares of the company and become an activist investor … which, let’s face it, would probably result in Musk acting in the best interest of himself before his fellow Twitter users.

Now that that particular share-buying roadblock has been cleared … Dan Ives’ previous Twitter theory could be close at hand.

What say you, Great Ones: Will Elon stay or will he go? You’ve just got to let me know: GreatStuffToday@BanyanHill.com.

A Quote of the Week? On a Monday?!

What a way to start off such a glorious week!

Glorious? What do you know about the future that I don’t, Great Stuff?

What, you livin’ under a rock? The newest episode of EV Days just dropped. And this latest quote from Stuart Crow, chair of lithium company Lake Resources, proves just why the EV battery-making bonanza is one of Great Stuff’s favorite soap operas off the Street.

There simply isn’t going to be enough lithium on the face of the planet, regardless of who expands and who delivers, it just won’t be there. The carmakers are starting to sense that maybe the battery makers aren’t going to be able to deliver. — Stuart Crow

It’s a bold take, Stuart. Let’s see if you’re wrong and are forced to eat … no, never mind.

So according to Mr. Crow — he talks to angels, don’t you know — there’s just simply not enough lithium on this rock to, well, keep our EVs boot-scootin’-boogying around the clock. And why would that be?

Right now China owns basically 70-80 per cent of the entire supply chain for electric vehicles and lithium-ion batteries, and therefore energy storage. The west has been remarkably slow to adopt a strategy to try and assist and secure a supply chain.

Sounds awfully familiar, no? While China being China is always a hurdle in itself, there’s something to be said of Western reluctance to wholeheartedly look toward multiple alternative energy options.

You might’ve heard basically the same exact thing here in Great Stuff before, especially when talking about — you guessed it — hydrogen. Go and cover up that Bingo free space for the obligatory hydrogen power shout-out now.

While Europe and certain parts of the Asia-Pacific region are already dipping their toes into the hydrogen market, we are far behind here stateside.

It’s almost as if the Great Stuff Picks portfolio predicted — nay, preempted! — this very situation. This here, Great Ones, is why it pays to be in multiple renewable trends.

Let’s play Stuart’s silly game and, for the sake of argument, say that lithium is gonna run out sooner than even the best analysts currently expect. It sucks, but you know how humans are with budgeting, like, anything.

For as long as lithium-battery EVs are on the worldwide production lines … Albemarle (NYSE: ALB) is the Great Stuff Picks way in on supplying that market.

So that’s another hand y’all have in the renewable cookie jar — and it sure helps that Albemarle has a presence in the restrictive Chinese lithium biz that Crow references. Why not keep one leg in the current lithium battery biz, and another leg in the new age of hydrogen?

With depleting lithium supplies, automakers are forced to explore other battery-making options, such as, oh, I don’t know … hydrogen fuel cells? Some automakers are ditching the rarer-origin supplies in favor of easier-to-source materials for their batteries.

The origin-what now? Is this like … sourcing coffee beans?

Well, maybe you’re not too far off: Nissan and NASA are partnering to create solid-state batteries that “don’t rely on rare or expensive metals,” with a pilot plant set to open up in 2024. (I didn’t know you could grow pilots that way, but hey, you learn something new every day.)

The nascent Nissan/Nasa link-up is looking far beyond the use of lithium, cobalt and nickel. The dynamic duo will create an “original material informatics platform” that literally creates custom mixes of battery materials from a huge database.

Ah, I recognize some of those words.

You should also recognize the next big thing happening for battery tech:

Once you’re done checking that out, let me know your thoughts over at GreatStuffToday@BanyanHill.com.

If you hit all the right buttons (including the one that says “send”), you might just see your email in this week’s edition of Reader Feedback! 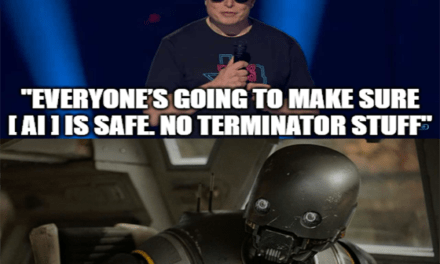 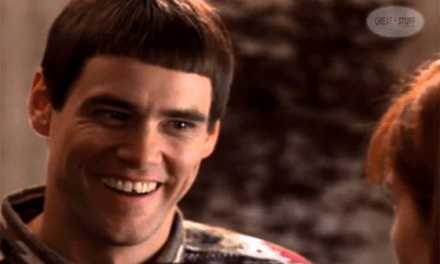