In December, less than one month ago, I wrote that the wild and crazy rush into cryptocurrency stocks would end.

Well, the craziness hasn’t stopped yet — and I didn’t expect it to.

But the latest cryptocraziness is even more mind-blowing, and more likely a desperate move than the previous ones.

Eastman Kodak Co. (NYSE: KODK), a 130-year-old camera company that has missed the digital camera revolution almost completely, is rebranding itself — as a cryptocurrency company.

At least Kodak didn’t abandon its industry. It is still working with digital photography.

But it is launching a new blockchain platform for digital photography called KodakOne, and it will have its own cryptocurrency, KodakCoin.

The stock more than doubled the day it announced the change, and went up another 70% or so on Wednesday.

Here’s a screenshot of the price movement I grabbed. You can see the surge in price (the blue line) and volume (the green bars at bottom) over just two days. 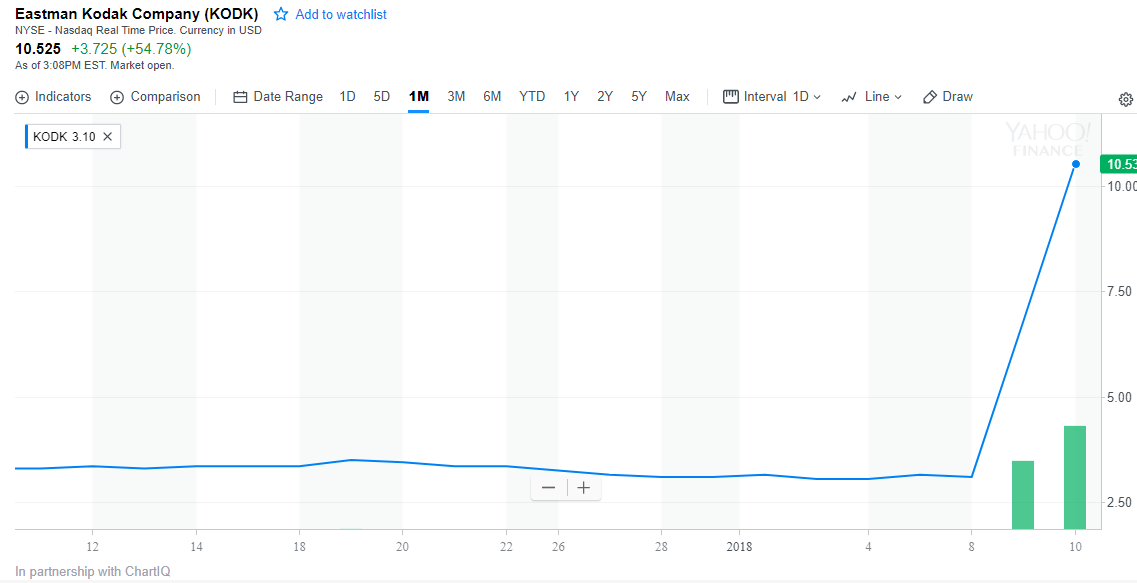 So, at this point, it seems like cryptocurrency investors think every new currency will be the next great thing.

This is a lot like the dot-com bubble, where just changing a name or adding a website experience sent stocks rallying. Some survived in the end, but that was after a massive crash in the whole sector.

The same thing will happen eventually for cryptocurrency stocks — some will be left standing, and others will go away.

But for now, the cryptomania phase continues, and I can only imagine what will be the next company to make the jump. By the end of the year, these are not companies you want to be anywhere near, that I am sure.