Home » Investing » Commodities » The Needle Is Moving on This Commodity

The Needle Is Moving on This Commodity

My first experience with uranium came at a project in remote northeastern Canada.

It was the kind of place where the entire camp was surrounded by barbed wire. That was to keep the bears from slicing open our tents like Ziploc bags at night and devouring us all.

In the daytime, I accompanied a couple geologists hither and yon in the surrounding countryside as they tried to show me why their uranium project was THE BEST EVAH.

The area was pretty bleak. A vast wilderness of rock outcroppings and rolling hills, with enough trees for bears to hide in (presumably).

I came across a blueberry bush. It was near lunch. I was hungry. So, I got a bright idea.

I grabbed the blueberries off the bush. And I was about to eat them when the geologist — who was as crusty as any of the lichen-covered rocks around us — slapped my hand, sending the blueberries flying.

“Why not? They’re blueberries.”

He activated his scintillometer — a device that replaced the Geiger counters you see in 1950s monster movies a long time ago — and waved it over the bush. The needles moved hard and fast. Radioactive as hell.

That was at the start of the last great uranium rush. It lasted for years. And it made my Weiss subscribers a whole heck of a lot of money.

Then a couple things happened. Oversupply was the biggest problem, as one new mine after another came online.

Then, in 2011, the earthquake and tsunami in Fukushima, Japan, sent three reactors into meltdown. That put a glow-in-the-dark nail in uranium’s coffin.

For a while. A very long while. 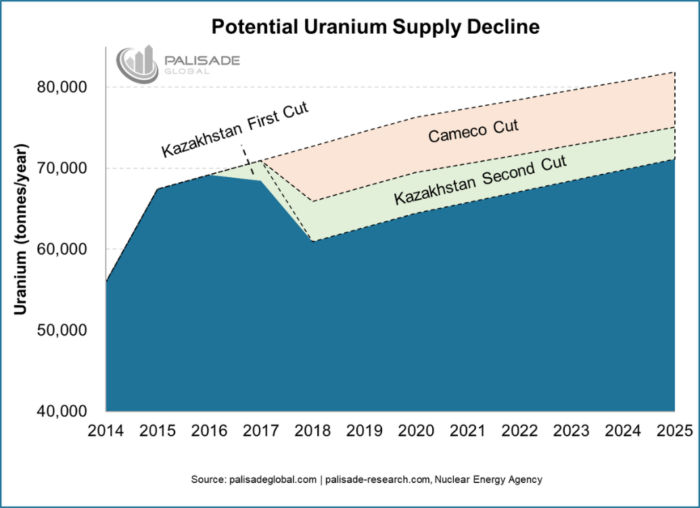 And that’s why last month, I recommended that subscribers to my new Wealth Supercycle newsletter start investing in this sector.

The specifics of what I recommended is between me and them. But something else interesting happened. The price of uranium has finally started to go higher.

In fact, as this chart from Bloomberg shows, the price of uranium went up 17% in 2017. That’s the first time that needle has moved in years.

That’s only the third time uranium prices have gone higher in the past decade. It’s also the biggest gain in the past seven years.

So, I’d say our odds are better than average that we are buying near the bottom of uranium’s current cycle.

Wealth Supercycle is all about big cycles. Mega trends. The massive movements of money that ebb and flow around the world … and that can make investors who ride them filthy rich.

Sure, there will be bears sniffing around. Just like in any market … or mining camp. But in a supercycle, the bears get chased out of camp pretty quickly.

Your timing doesn’t have to be great when you’re buying a supercycle or mega trend. You just have to get on board and brace for a wild, potentially very profitable ride.

That’s what we’re doing. Heck, uranium is also part of the story.

Just last month, in Wealth Supercycle, I gave subscribers picks in other energy metals, gold, robotics, electronic currencies and cannabis. And there are plenty more to come.

If you care to join us at Wealth Supercycle, click here.

The big trends are out there, my friends. Waiting for investors to reach out, grab ‘em and hold on.

Best wishes to you in 2018. May you find the fortunes that are waiting for you. And may all your bears be rugs.

You Must Be Long These Metals in 2018

The Squeeze of the Metal Fist