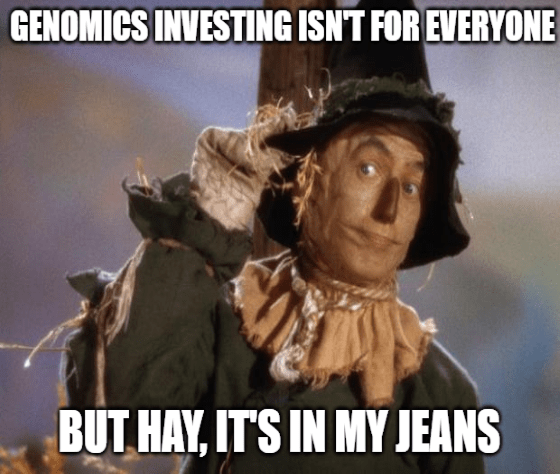 Goooooood mooooorning, Great Ones! I hope your appetites are as big as those bright, beaming eyes … it’s breakfast time!

Great Stuff, it’s like … five o’clock in the evening? You doin’ okay? Writing on an empty stomach again?

Wall Street’s been in an Early Bird Special mood so far this week, and I’m not complainin’.

If you tuned into yesterday’s shindig (and why wouldn’t you?), you’ll have seen a number of companies jumping the earnings gun and already sharing their greatness from 2021. Taiwan Semiconductor, Crocs … all the market’s greatest hits, clearly.

And this morning, the syrup had barely settled on my waffles — not a euphemism — before biotech giant Illumina (Nasdaq: ILMN) was up and dishing out hot, fresh press release pancakes.

OK, Illumina might not be “Big Pharma” kinda giant, but the impact of its gene sequencing tech certainly is monstrous.

Genes, genes, what’s it all mean?!

Well, that’s … what I was getting to. Gene sequencing lets us basically map out and analyze human and animal genomes to identify various inherited disorders and even make vaccines. I know it’s easy to get swept up in biotech hype often, but this is literal life-saving tech.

And Illumina? Phew, boy, Illumina is up to a whole other can of genetic worms — and no, it’s not reviving the dinos (I hope). The company is laser-focused on the oncology testing market, using its gene sequencing to improve cancer diagnostics and treatment.

If all this sounds familiar, we said as much back in April 2021 with “Illumina-ughty By Nature.” Back then, Illumina was still facing regulatory pushback over acquiring Grail, which is a gene sequencing firm Illumina spun off back in 2016 … and bought back last year to better target the oncology market.

You might also remember that Illumina called for revenue growth between 25% and 28% for fiscal 2021. (Well, to be fair, I don’t blame you if you didn’t remember this last part.) But all that was nothing compared to what Illumina actually reported before Wall Street woke up this morning.

For fiscal 2021, Illumina’s revenue rocketed up a whole 39% year over year, with the company reporting record revenue of $4.517 billion. It doesn’t stop there, however — Illumina expects its revenue to land between $5.15 billion and $5.24 billion for fiscal 2022.

And if that wasn’t enough, Illumina announced not one but four new clinical partnerships, like a biotech mic drop reverberating on the Street:

• With Boehringer Ingelheim, Illumina will use molecular tumor profiles to identify fitting candidates for new medicines. 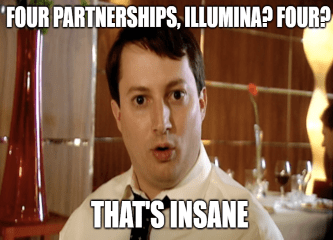 And to Wall Street, Illumina’s news is simply irresistible — ILMN shares shot up 4% before the opening bell and ended the trading day up 13%.

Sure, some of that momentum must’ve come from the broader market’s midday rally … but you can’t blame ILMN investors for immediately going into party mode.

Illumina was bolstering up its oncology prowess for basically all of 2021 — especially with the added synergies and research from Grail rejoining the fold.

Illumina’s better-than-expected revenue shows its management is focused on researching the next best iteration of its tech while also bringing in heaps of cash right now. And the company’s slew of partnerships boosts investors’ confidence that Illumina’s gene sequencing tech isn’t all hot air and hype.

Longtime Great Ones, you know the deal here: We don’t go chasing waterfalls and rallies … especially when it comes to biotech stocks. If you are interested in Illumina’s gene sequencing tech, wait for today’s fanfare to subside before you look to buy.

Instead, check out what else is crackalackin’ in the genomics market: It’s called “Imperium.” 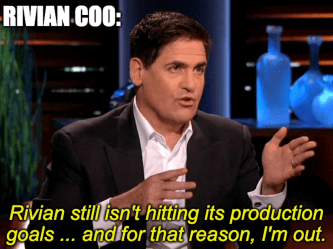 Electric vehicle (EV) renegade Rivian (Nasdaq: RIVN) has started going in reverse after launching one of the biggest IPOs of 2021.

Oh, how the turntables.

Exactly right, Great Ones. Rivian clearly hit all the right buzzwords for EV enthusiasts before going public, as it was already being called a serious Tesla (Nasdaq: TSLA) contender before making a single one of its EV trucks.

But now investors’ enthusiasm for Rivian is starting to wane, spurred by the company’s continuous production delays that keep kicking mass rollout of the R1T pickup truck further down the road.

The latest production snag comes from Rivian’s own Chief Operating Officer, Rodney Copes, who decided he could cope with the pressure no longer and retired from his position at Rivian. Seeing as production oversight was one of Copes’ main responsibilities as COO, his departure could dampen Rivian’s delivery rate in 2022.

While Copes’ kerfuffle initially surprised investors, Rivian shares have since rebounded from their morning low and are trading 4% higher. Even so, I’ll continue to steer clear of Rivian’s stock and suggest that you do the same … unless you’re the kind of investor who hangs out in Las Vegas casinos.

If you want a surer EV bet that won’t (potentially) break the bank, check this out:

A former Tesla employee just released a brand-new innovation that’s setting up a new market 10X bigger than EVs. Here’s how you can buy into it right away.

Big Lots (NYSE: BIG) is the latest in a long line of big-box retailers to report ongoing supply-chain issues thanks to the oppressive Omicron variant.

After outperforming for much of November and December, the discount retailer said January sales had already slowed down thanks to COVID-19 constraints and winter weather conditions.

In fact, Big Lots is already calling for bigger declines in its first quarter, with earnings per share ranging anywhere from $1.80 to $1.95 — down from analysts’ target of $2.17 per share.

Our outstanding team has worked tirelessly to offset headwinds from the global supply chain. While the Omicron variant creates some near-term challenges, we look forward to rounding out another very successful year for the company.

If Thorn’s power of positive thinking could magic up some supplies to stock Big Lots’ shelves with, we’d be cooking with gas. Until then, I imagine his pep talks sound something like this:

Hey, stock team in the back … are we still out of stuff? Yes? Got it, thanks; y’all are outstanding! 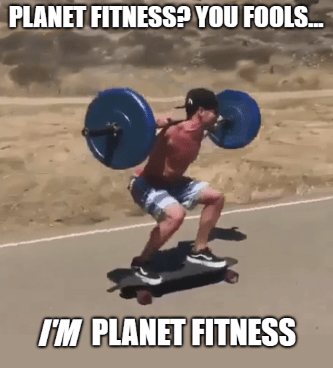 Even fitness franchises need to get swole every now and then, and what better way to do that than to gobble up other gyms?

If that’s the case, you’re really not going to like today’s Quote of the Week. But more on that in a sec…

As I was saying, Planet Fitness (NYSE: PLNT) is on parade today after announcing plans to acquire Sunshine Fitness — an operator of more than 100 Planet Fitness clubs throughout the Southeast — in a cash and stock deal worth $800 million.

When the dust settles, Planet Fitness will have more than 200 corporate locations around the country, making up about 10% of the gym guru’s total portfolio.

My colleague Charles Mizrahi has been working on an exciting new project … and it’s definitely worth checking out.

The company he’s recommending belongs to a special class of stocks that has crushed the market 6-to-1 … for almost a century. In fact, if you’d invested $10,000 in each of the top five stocks in this class in January 2020, you’d have made more than $1 million … in a single year.

No Rest For CVS

It’s not all bad news out there in retail, Great Ones! If anything, CVS Health’s (NYSE: CVS) coronavirus courtship could be considered the yin to Big Lots’ yang.

The drugstore delivered an outstanding earnings outlook for the full year of 2021 and now expects to make an adjusted profit of $8.33 to $8.38 per share. For the record, that’s well above the current analyst consensus for earnings of $8.03 per share.

This comes off the heels of a particularly strong fourth quarter when CVS’ over-the-counter COVID-19 testing kits started selling like hotcakes.

The coronavirus has been such a boon in CVS’s bonnet, in fact, that the company plans to turn itself into a one-stop health care destination shop. Thinking that it’s something of a hospital itself, CVS plans to add a slew of medical professionals, diagnostic tests and “primary care” to its stores over the coming year.

What that primary care consists of remains to be seen, but if it saves me the hassle of scheduling a doctor visit, then color me intrigued.

There’s a lot of Americans eating fast food more than once a week, and if they see value in the subscription program, they will gladly subscribe.

The time has come, Great Ones … fast food subscriptions are here.

As Levinter alludes to, Taco Bell kicked opened Pandora’s box last week, and inside was a $10-per-month “Taco Lover’s Pass” that gives you a taco every day for a month. It’s like a Flintstones vitamin regimen, but for agita.

Ah yes, the pinnacle of ‘Murican convenience — if you want to call it that. Others on the Great Stuff Team called it the “downfall of society, one daily taco at a time.” And I don’t fully disagree.

But hey, if Illumina sequencing the literal building blocks of human life didn’t fill you with amazement … maybe taco subscriptions will do it for you? 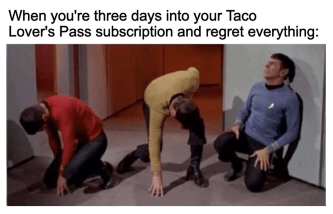 Now, you might be thinking: “Who would eat tacos every single day? Wouldn’t you get sick of it?!”

First off … try me. And second, not using your Taco Lover’s Pass to its full potential is exactly what the Bell wants. Why wouldn’t it? “The Man” doesn’t want you to get that daily taco! Not after you’ve already forked over your queso-covered $10 bill (perish the thought).

It’s the same concept that makes gyms barely profitable: The less you use what you paid for … the less the company has to spend on you. It sounds oversimplified, but this is literally the goal of many a subscription service out there.

If you’re enough of a Taco Bell fan to buy the Taco Lover’s Pass, chances are you’re gonna get more than just a taco on your visit anyway … especially if said fast-food run happens after 2 a.m. Just sayin’.

And if you don’t end up using that pass, well, don’t go crying a diablo sauce river to Taco Bell.

That’s it. My diet is donezo. Thanks, dude — you’re going to kill me.

Hey now, there is an investing angle here, after all. Depending on how Taco Bell’s trial run goes, you can expect other chains to hop on the subscription economy bandwagon … until the bandwagon breaks an axle and no one wants subscription fast food, that is.

I mean, what trend wouldn’t Ronald McDonald jump on and massacre in an instant?

I’m Grimacing at the thought…

What do you think about subscription fast food, Great Ones? (I can’t believe we’re even asking this … thanks, Taco Bell.) And are any of you invested in the restaurant biz to begin with? 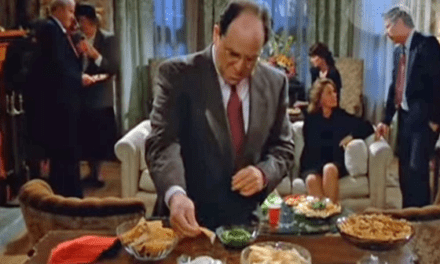 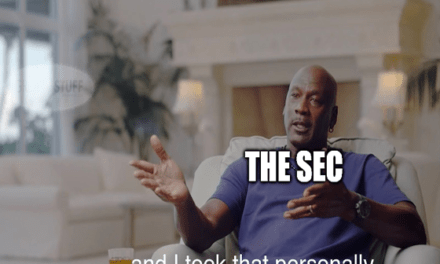