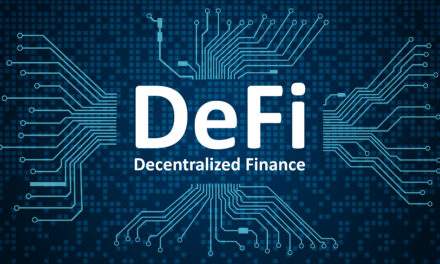 “I’m a major skeptic on crypto tokens … like bitcoin.”

Jamie Dimon is the CEO of JPMorgan Chase, and one of the world’s most powerful bankers.

That’s why he was called before Congress last week.

Lawmakers grilled Dimon and his banking colleagues on everything from Russian investments to interest rate hikes for more than six hours.

His crypto testimony made the biggest headlines:

“The notion that [crypto is] good for anyone is unbelievable.”

But the same day, his bank told investors something else entirely.

While the head of the bank told Congress that crypto was “worthless,” his top executive said the company’s investors should dive in.

In May, JPMorgan even told its investors that crypto had “significant upside.”

The bank’s analysts said bitcoin could easily make its way back to $38,000.

Dimon and JPMorgan aren’t the only ones sending mixed signals.

Some of Wall Street’s most prominent players in banking are denouncing crypto in the press … then racing to adopt it behind the scenes.

In 2021, Goldman Sachs said cryptocurrency was “not a viable investment.”

Meanwhile, the company ramped up its crypto trading options.

Goldman also sourced over $15 million to get Coin Metrics, a database for the world’s crypto data, off the ground.

In an interview with CNBC, Morgan Stanley CEO James Gorman said anyone who thought bitcoin was a stable investment was “deluding themselves.”

Then, less than a year later, the same CEO told analysts: “I don’t think crypto is a fad.”

Wall Street’s top players often tell the public one thing — then tell their employees another.

That’s when you express an opinion beneficial to your portfolio … whether it’s the truth or not.

This is nothing new.

Mad Money’s Jim Cramer was famously outed for talking his book back in his hedge fund days.

I think there’s more to it this time though.

These big banks aren’t just talking their books on crypto.

If we take a closer look at the traditional banking model, it’s embarrassingly outdated.

You put your money into a savings account that pays 2% to 3% at most.

Then the bank loans your money out to home and auto buyers at about twice that rate.

We can’t forget about the fees — or the fact that inflation is now over 8%!

Early on in my career on Wall Street, I learned this is just how the system works.

The finance industry makes its money as middlemen in the capital formation process.

The more capital that passes through its gilded doors, the more fees it pockets.

Today’s global banking system has a monopoly on $100 trillion in annual business.

That’s how bankers like Jamie Dimon become billionaires, by taking a cut of every loan, mortgage, trade and transaction in the financial system.

That’s also why banks are terrified of cryptocurrency.

Because it’s a new way of executing financial services that takes the power away from the banks.

Over the last decade, cryptocurrencies have taken the world by storm.

It’s only been 13 years since the first bitcoin was minted. Now it commands a staggering $367 billion market cap.

Ethereum isn’t far behind. It has nearly half the market cap, with 10 million users worldwide.

Both of these cryptocurrencies are powered by distributed ledgers called blockchains, which validate and track who owns what.

These decentralized networks are the backbone of almost every crypto.

How Blockchain Is Unleashing Next Gen Finance 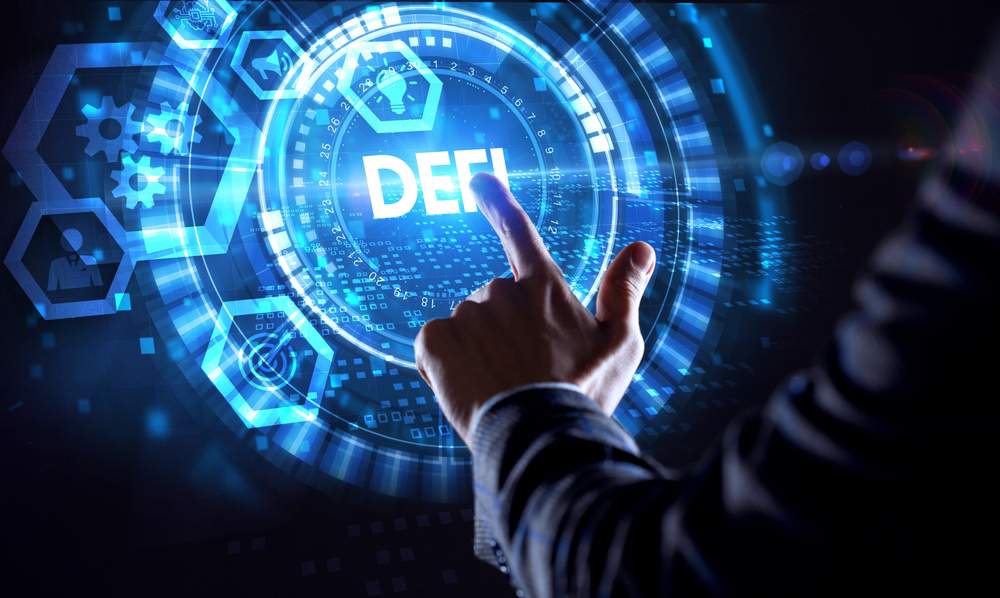 For most investors, decentralized finance (or DeFi) is still largely unknown.

(Subscribers will know I’ve written about it extensively over the last few years).

If this is your first time hearing about DeFi, you can think of it as banking without the bank.

It doesn’t rely on the same centralized systems as traditional banks.

Instead, DeFi builds on the flexibility and scaling power of a distributed blockchain.

So it can offer solutions light-years ahead of the competition.

For example, Visa’s network completes an average of around 1,700 transactions each second.

But Ethereum’s network is in the process of scaling up to 100,000 per second — almost 60X the speed.

Fees (or the lack thereof) are another benefit.

Credit card vendors charge 2% to 3.5% every time you swipe your card. That adds up to $100 billion each year.

By comparison, bitcoin’s Lightning network charges a base fee of just $0.04 per transaction.

Also, most blockchain projects are open source. That means anyone can make improvements to the code, and it creates competition among DeFi projects.

So you’ll have more providers fighting for your business.

All of this holds serious appeal for investors.

As a result, DeFi has quickly become a major breakout in the crypto space.

But there’s still $96 billion in top DeFi projects today. That’s 10X as much as just two years ago: 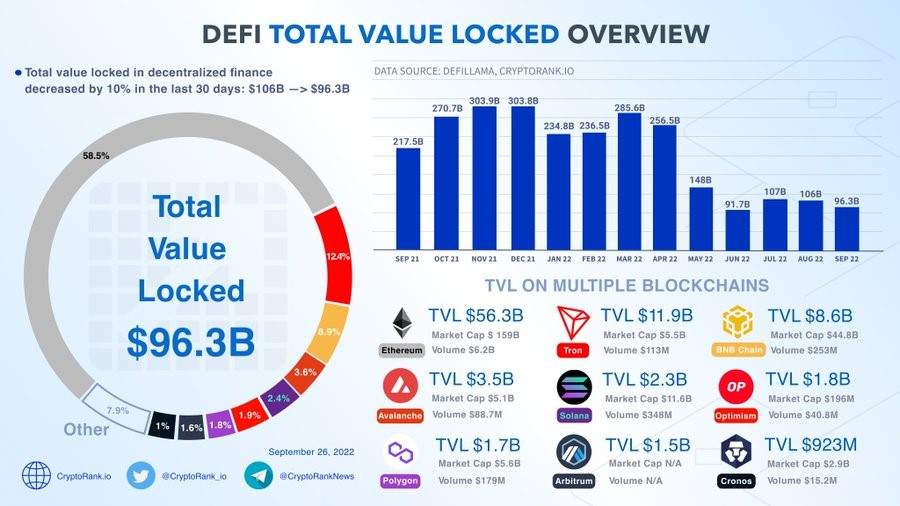 So how does DeFi work?

3 of the Market’s Leading DeFi Players

But it’s important to remember — they all still serve an essential financial purpose.

They just use a different approach.

You read that right.

Like Binance or Coinbase, users can go on PancakeSwap to exchange crypto and other tokens.

There’s no intermediary. No middleman. The whole system is automated. Liquidity is provided by other users, who are compensated with a steady income for staking their value.

And despite the silly name, this exchange does an impressive $99.05 million in trading volume per day.

Thanks to its superior efficiency, PancakeSwap’s fees are less than a third of what you’d pay on Binance.

Next up is Uniswap, the largest decentralized exchange (or DEX).

This DEX launched almost four years ago, which makes it a real veteran in the industry.

According to a report from May of this year, Uniswap’s unique DeFi approach offers far greater liquidity than its non-DeFi competitors: 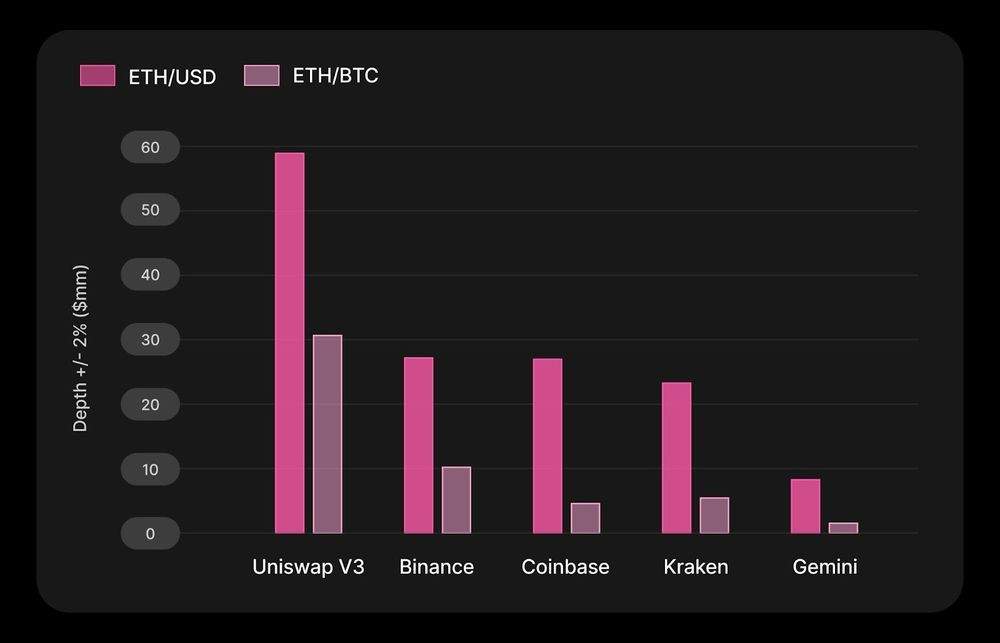 Once again, the result is lower fees — especially for larger institutional investors.

Uniswap estimates a $5 million ETH/USD trade costs about $24,000 less than it would on Binance or Coinbase.

Raydium is another automated market maker and liquidity provider, except this one is built on the Solana (SOL) blockchain.

It’s very similar to Uniswap and PancakeSwap, but it allows for the decentralized trading of Solana-based tokens.

It also has a launchpad for new projects to raise capital called the Raydium AcceleRaytor.

So instead of going to an investment bank like Goldman Sachs for their IPO, new blockchain projects could use Raydium’s platform.

We’ve Seen This All Before

Yet it’s still hard to imagine a world without our credit cards or checking accounts.

The irony is, most of us felt the same way about our home phones just 20 years ago.

Back when big telecom companies like AT&T ruled the roost.

Then in the early 2000s, we got “voice over internet protocol” (VOIP).

And in an instant, those old copper-wire networks became obsolete.

For decades, we couldn’t live without phone service.

By 2020, less than half of American households even have a landline. Goodbye, long distance charges!

The same thing happened to video rental stores like Blockbuster when Netflix started to catch on.

Suddenly, we could enjoy our entertainment on demand — while skipping out on the late fees.

We’re starting to see this same Next Gen Effect disrupt the banking world too.

Before the pandemic, the industry raked in nearly $12 billion a year in overdraft fees.

Now it’s suddenly cutting back on penalties to fight for business.

After building banks on every corner, almost 10% of all branch locations have closed in the last five years alone.

It’s no surprise that Americans are fed up either.

In other words, banks charged people like you and me $114 billion for the pleasure of doing business.

DeFi vs. Traditional Banks: “It’s Obvious Which Approach Will Win”

The global financial system was built to maximize profits.

But it wasn’t built to adapt.

So in the face of DeFi, the world’s biggest banks are entirely unprepared.

Banks have already lost $600 billion (or 3% of their depositor base) to crypto!

That’s before Ethereum’s Merge sent the ETH blockchain into overdrive too.

The advantages of DeFi are too significant to ignore.

One bank CEO pointed to the cost of integrating new DeFi systems versus legacy solutions:

But the paradigm has shifted: Payment system integration time is now measured in hours, not months or years — and in a few hundred dollars, not a few million dollars. It’s obvious which approach will win.

That’s why Jamie Dimon is eager to downplay crypto’s value.

It’s why former Goldman Sachs head Lloyd Blankfein wasn’t “comfortable” with it before changing his tune earlier this year.

It’s threatening billions of dollars in bank fee income. But they’re powerless to stop it.

So they’re rushing to get skin in the game.

JPMorgan already has its own crypto token, the “JPM Coin.”

The company has over 200 employees working on crypto in its Onyx division.

Crypto and blockchain companies raised $25 billion last year — much of it from Wall Street.

Then a little over a month ago, almost 1,700 insiders signed a letter pleading with the SEC to regulate cryptocurrency.

Some of these parties probably want clear rules for investing.

Other prominent players are undoubtedly “talking their book.”

They’re fighting to hit the brakes on crypto adoption … to preserve their advantage any way they can.

But it’s already too late.

Cryptocurrencies have laid the rails for a new global financial system.

DeFi will make it happen. That’s why the battle between DeFi vs. traditional banks truly is no contest in my eyes.

For more on this topic, check out my full presentation on the Next Gen Crypto here.

Would You REALLY Miss Your Bank?

Are you fed up with banking fees and ready to switch over to DeFi apps to manage your portfolio, cash and savings?

Please tell me what you think, and I’ll feature your response in this Saturday’s Reader Appreciation Day (RAD)!

Just send us an email at WinningInvestorDaily@BanyanHill.com. Don’t forget to send this post to your friends! 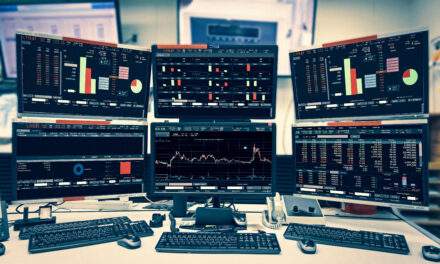 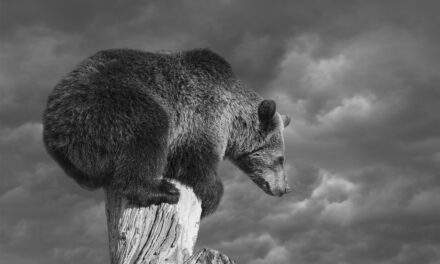