The consumer confidence metric is calculated by getting U.S. households’ opinions about things like current/future business, employment and income conditions. It’s one of the primary tools that businesses, banks and the government look at to get a good overview of economic activity.

So, it looks like it’s still too early to be calling for a stock market crash.

After all, it’s really all about the consumer. In 2016, consumption made up 69% of the United States’ gross domestic product (GDP). Next was government spending at 18%.

So, one of the most important things to look at when gauging our economy is the consumer’s overall outlook. And right now, that outlook is extremely positive. 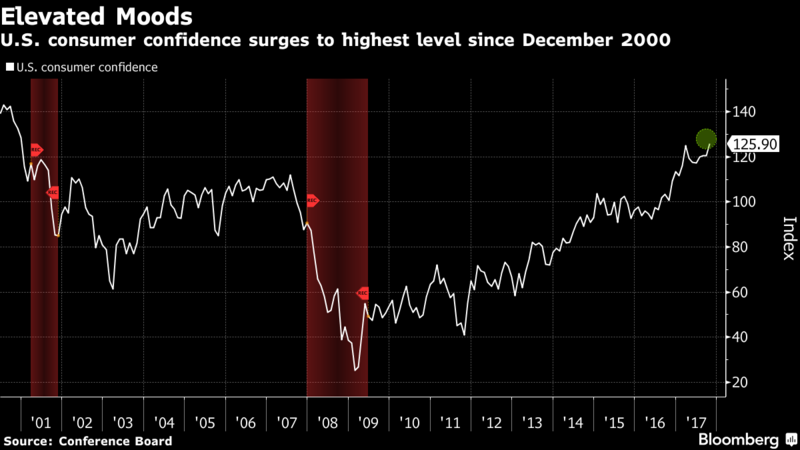 To put that in perspective, the benchmark is 100. Anything over that level is positive, so 125.90 is in very good territory.

Also, as the chart states, it’s the highest since 2000. Some people may look at that and think “That means we’re in a bubble” or “That was right before the market crashed, so it’s going to happen again now.”

But until it forms a clear peak, what’s the point of worrying about a market crash?

Of course, one chart can’t speak for the entire economic future. It’s always smart to be prepared by having a hedge in place like puts, inverse funds, a diversified portfolio or trailing stops.

But, for now, people are still spending money, creating rising sales for businesses. The stock market rewards that. So, buying U.S. stocks is still a wise idea.

In fact, there are hundreds of companies that are now required to pay out checks to all shareholders. And some of these companies are still priced under $10 a share at the moment, making them a lucrative buying opportunity for any investor.

The Federal Reserve’s Threat to the Market