Cash-Balance Plans Are a Good Alternative to a 401(K)

A 401(k) plan is also supposed to encourage retirement savings that would otherwise not happen.

But research shows that most of the nation’s annual 401(k) contributions would have been made anyway. All the tax breaks devoted to that saving are wasted.

The 401(k) emerged by accident in 1980. Benefits consultant Ted Benna noticed that the Revenue Act of 1978 allowed employees to put pre-tax money into a retirement plan with an employer match. The IRS formally blessed the idea in 1981.

They may not be good for employees, but they save employers tons of money. They generate loads of fees for investment managers. That’s why, by 1983, half of major U.S. companies offered a 401(k).

Above all, 401(k) plans allow U.S. employers to shift the burden and risks of retirement income to employees.

But there’s another way to save for your retirement … and it’s dramatically better.

The old company pension plan has gone the way of the dodo. It was a “defined-benefit” plan. Employees knew at the start what monthly income they would get.

The traditional pension was supposed to be secure.

It was actually very risky. Companies were supposed to manage their own pension plans, professionally, to make sure that their retirees had enough money to live.

But over the years, employer-friendly Congresses watered down the system to the point where a company in financial trouble could simply stop paying pensions altogether.

The 401(k) plan, like the individual retirement arrangement (IRA), shifted the burden and risks of retirement saving to individual employees. Each worker had to decide how much to save.

Those savings, plus the ups and downs of the stock market, would determine whether they would have enough to live on in retirement.

The employer had no more obligation beyond whatever match it chose to offer.

There is one widely overlooked option that combines the best of the two retirement savings plans.

“Cash-balance plans” are a hybrid of traditional defined-benefit pension plans and a 401(k).

As in a traditional pension, the employer provides the pension contribution. Investments are managed by professionals, and participants are promised a certain benefit at retirement.

But that promised benefit is expressed as a 401(k)-style account balance for each individual employee, rather than as a guaranteed monthly income for all employees.

With a 401(k), an employee’s retirement benefits depend on the performance of the market and the fund manager. The employee bears all the risk.

With a cash balance plan, employees are guaranteed a lump-sum benefit at retirement. The employer, not the employee, bears the risk of market fluctuations.

Because they provide defined benefits, cash-balance plans must be insured, unlike a 401(k).

Cash-balance plans give employees the security of knowing what they’ll have at the start of retirement. They can then turn it into an annuity or take a lump sum.

But employers benefit too. Once employees get their payouts, they’re off the books. No pesky long-term obligations.

The amount of money in cash-balance plans is growing by double digits in the U.S. retirement market (figures in billions): 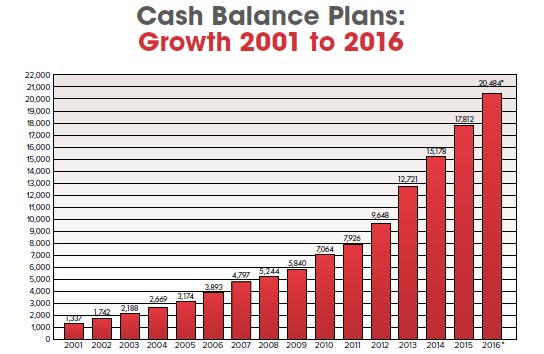 A Big Bonus for Big Earners

Cash-balance plans are simple and so is the reason for their soaring popularity.

But cash-balance plans have far higher contribution limits that increase with age. People 50 and older can easily contribute more than $200,000 annually in pretax contributions. And they can contribute to defined-contribution 401(k)s and IRAs as well.

Is This Right for You?

If your employer doesn’t offer a cash-balance plan, you might want to have a chat with the human resources department.

If they do, ask them to find the sweet spot where a cash-balance contribution minimizes your annual tax bill without cutting into your disposable income.

But if you’re self-employed, or own a small business, there’s nothing stopping you.

And there are plenty of reasons to explore the cash-balance option, especially since the current maximum contribution to a SIMPLE IRA is only $15,500!

So, if you think you can benefit from a cash-balance plan, you almost certainly will. Find yourself a good CPA or tax attorney and run the numbers.

I promise you, you’ll thank me when you do.

Here’s Why the Bull Market Isn’t Over Yet

How Does a Reverse Mortgage Work?