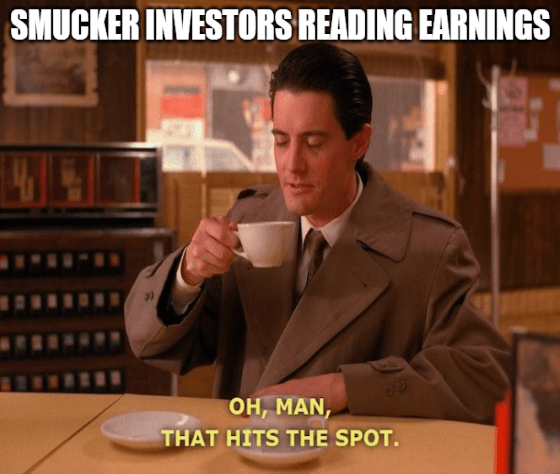 Where Do Pies Go When They Die?

I’m entering the town of Great Stuff … five miles south of Wall Street, 12 miles west of the state line. And I’ve never seen so many earnings reports in my life…

All I did was to come to earnings season, and it’s like I fell into … into a dream!

And where else would you rather kick off your holiday shenanigans than the town of Twin Peaks — erm, Great Stuff? 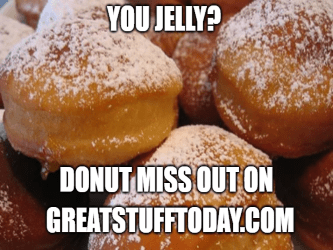 We’re all aflutter here, getting ready for the long holiday weekend. So, we’re keeping things short and simple today — as any trip to the Black Lodge should be.

We’ll jam in some quick earnings from J.M. Smucker (NYSE: SJM), and wham-o! We’re in the home stretch for some Thanksgiving breaking … and heaps of huckleberry pie.

Snap out of it, Great Stuff!

Right, so, where were we? Smucker was jamming all throughout its earnings call last night. (Welch’s was berry jelly, believe me.)

Smucker’s earnings per share hit $2.43 and topped analysts’ targets for $2.24. Revenue rose just 0.8% and reached $2.05 billion, also beating estimates for $2.01 billion. All that despite rising costs and supply chain issues.

A jelly supply crunch? Say it ain’t so!

Now, you might think: “Say, who eats that much jelly besides kindergartners, hmm? Shut-ins and recluses? Backwoods sheriff agencies? Cursed orchid keepers?”

All I’m saying is there’s much more to Smucker than just jams. Owls and preservative pushers are almost never what they seem, after all… 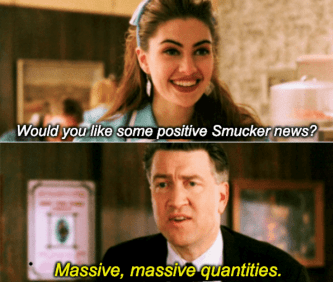 The real deal about Smucker, to me anyway, is that it owns packaged-coffee brands like Folgers, Dunkin Donuts’, Café Bustelo, Pilon and Medaglia D’oro.

Throw in some Keurig-Green Mountain Coffee partnership action for those “I literally just want to press one button” folks, and Smucker might be the coffee stock you never knew you needed! Starbucks who?

The company is still shaking from the overcaffeinated excitement of its pandemic-propelled earnings. Here’s CEO Mark Smucker himself:

Our entire business benefits from folks having stayed at home and continuing to stay at home as we go back to a new normal, where folks will probably work more time from home than away from home or in the office. And that benefits because our products are consumed at breakfast and lunch primarily.

Clearly, someone hasn’t discovered the pleasure of the 2 a.m. PB&J munchies.

So, more people at home — working or otherwise — are one step closer to the kitchen and a tad more likely to give into snackish temptation. Crunchy peanut butter off a spoon? “My log does not judge…” 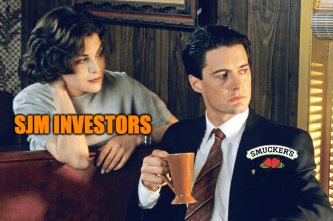 Smucker has enough brands under its roof that when one product segment lags, another picks up steam. Last quarter, for instance, consumer foods sales dropped 8% to $441.2 million, but coffee sales are up 8% to $645.1 million.

It’s coffee, you see, that’s the lifeblood of literally every issue of Great Stuff you’ve ever read.

And some of us prefer a more caffeinated liquid lunch, including the legions of remote workers who’ve grown accustomed to constantly brewing up new pots of coffee. All. Day. Long.

Communal Keurig machine? No, thank you, good sir. We left those in 2020.

Recent studies also found remote workers drink much more coffee than the in-office crowd: an average of 3.1 cups versus 2.5 cups every day. Psssh, those are rookie numbers…

Combined with Smucker’s report, it’s not just us here at Great Stuff HQ who’ve gone through package after package of coffee throughout the pandemic. And if I could get my caffeine via IV drip instead, well, I’d be down at the patent office right behind some lunatic with silent drape runners.

Whether you take your coffee black as midnight on a moonless night or … well, the wrong way … Smucker rules the home-roasting roost.

And while the company isn’t quite as — how do you say this politely — growthy as I’d prefer my growthy companies, I admire any CEO who calls an Uncrustables sandwich one of their “most important growth engines.”

Move over, Zoom Video. Who knew that Smucker was the real pandemic play all along?

SJM shares boiled up 6% after the report dropped, settling down 2% in today’s trading. And I thought I had more jelly puns … but maybe it’s best to preserve them.

Are any of you Great Ones invested in SJM — or Twin Peaks? Do you have another way to scratch your portfolio’s itch for coffee stock picks?

Oh, and what’s your favorite kind of jelly in a PB&J? My vote is blackberry … and definitely not mint jelly. Never again will I make that mistake.

Editor’s Note: Every Day, Once A Day, Give Yourself A Present

Don’t plan it. Don’t wait for it. Just let it happen.

It could be a new shirt at the men’s store, a catnap in your office chair before Great Stuff shows up, or two cups of good, hot, black coffee. Or some super-secret info from your overcaffeinated friends here.

See, tech giants like Microsoft, Google, Amazon and Apple are also spending an enormous amount on this technology. It’s not 5G, the Internet of Things, AI, electric vehicles (EVs), autonomous driving … or other technologies you’ve been hearing about.

It’s something much bigger. It’ll impact every facet of your life. From how you sleep, travel, work and even the quality of your food and water.

You owe it to yourself today.

At long last, it’s Wednesday, Great Ones. But not just any kind of Wednesday — oh, nay nay!

‘Tis a special day filled with last-minute holiday shopping, Black Friday cyberstalking and the delicious aroma of pumpkin pie wafting through the air vents … if pre-turkey prepping is your particular cup of pu-erh tea.

But before you break out the spandex and trek over to Aunt Sue’s house for dinner … followed by a second helping of supper … we have one last task to square away: today’s poll!

If you missed our carpool karaoke last week, we took a scenic romp ‘round the EV arena once again. Specifically, we wanted to know if any of you Great Ones had goofed and chased after Lucid Motors’ (Nasdaq: LCID) or Rivian’s (Nasdaq: RIVN) recent stock rallies.

Let me just say: Your answers shocked the hell out of me. A whopping 85.3% of you said you had far better things to do than waste time chasing cars … er, rallies. It’s almost like you’ve been reading our rag on the reg — kudos! 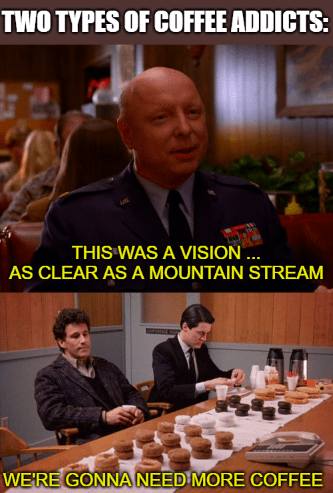 5.9% of Great Ones reported having Lucid dreams lately, while another 5.9% of you consider yourselves real Rivian ruffians. You’ll have to let me know how each of those life choices shake out…

Finally, a mere 2.9% of you said: “Why not buy ‘em both?” I guess if you like losing money, that’s an efficient way to do it! But enough of this EV chitter-chatter. On to bigger and better things!

This week, we want to know your opinion on one thing and one thing only: Should Elon Musk be in charge of Earth’s planetary defenses?

Oh, you read that correctly. It seems our old pal Elon still cares about Earth after all — and not just colonizing Mars. Musk’s SpaceX is teaming up with NASA to launch Earth’s first-ever planetary defense mission, which involves shooting a rocket into an asteroid to change its forward trajectory.

Don’t worry, though — that asteroid isn’t headed toward Earth (at least it wasn’t before NASA started playing marbles with space rocks the size of Egypt’s pyramids).

I really, really, really don’t like seeing “Elon Musk” and “planetary defense” in the same sentence … but I wanna hear your thoughts on the matter. Am I just paranoid, or is Elon only protecting Earth until his Mars colony is up and running?

Don’t see an answer you like? Make one up and send it our way!

We accept all forms of communication — messenger pigeon, paper planes, even strung-together solo cups — but GreatStuffToday@BanyanHill.com is where you can reach us best. 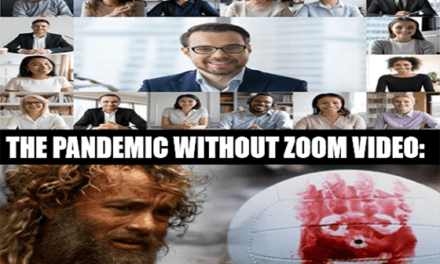 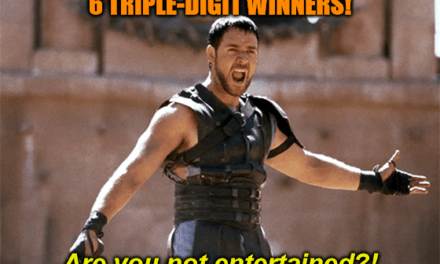