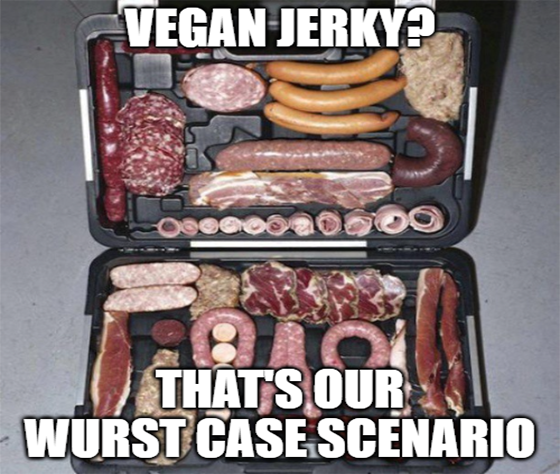 Great Ones, riddle me this…

You ever get so into making your own jerky that you nearly go broke for that sweet, sweet dehydrated meat?

Such is life for faux-meat fixer Beyond Meat (Nasdaq: BYND). And as the meatless wonder’s latest earnings report confirms, not even imitation jerky can save the company from … well … itself.

You might remember us poking fun at Beyond Meat’s janky jerky jive when it was announced back in January. And here we go for round two, now that the results of said jerky venture are in the books.

See, Beyond partnered with PepsiCo (Nasdaq: PEP) to jettison its vegan jerky out into the brave new world.

Since Pepsi has the distribution empire of, you know, Pepsi, this made investors believe that the Beyond Meat’s jerky actually had a chance to get in front of consumers … compared to everything else Beyond Meat has put out in the past.

Beyond ended the quarter with a loss of $1.58 per share — tripling year over year and surpassing the Street’s estimate for a loss of $1.01 per share. Sales actually rose 1.2% to $109.5 million, but still missed the $112.3 million that analysts expected.

Same as it ever was, Great Stuff. Why blame the jerky?

Well, let’s see: While Beyond Meat saw more sales from the launch of its jerky, the company still can’t figure out how to bring its products to scale. Production costs for the ersatz jerky ruined gross margins for the quarter:

While we’re thrilled with its early sales performance and strong customer response, Beyond Meat Jerky manufacturing, still in its infancy, was a significant headwind on gross profitability this quarter. — CEO Ethan Brown

Making the mimic-meat jerky was so expensive — how expensive was it? — that Beyond’s gross margin dropped from 30.2% in 2021 all the way down to just 0.2% last quarter.

Oh, it gets better — er, worse (sorry, not sorry, Beyond). To top it all off, sales for Beyond’s other mystery-meat protein products fell on the quarter.

What you end up with is this messy, meatless morass of a miss, which shouldn’t be a surprise to any of you BYND investors. Unfortunately, y’all have seen this before.

Why, ‘twas merely months ago that we noted:

None of these skunkworks projects ever lead to actual Street-satisfying earnings — just look at literally every time Beyond Meat has reported in the past. Yet Beyond keeps its hype cycle a-spinning, digging an even deeper hole for when Wall Street’s scythe of expectations comes back ‘round again. 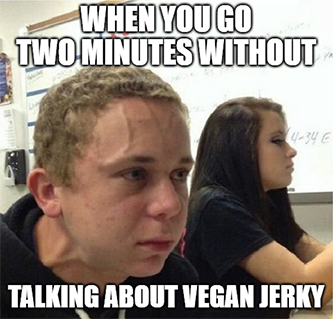 So … what does Beyond need to do to actually, you know, make money? How will it ever reach analysts’ — or investors’ — rising expectations?

First, Beyond Meat had the dual issues of lacking robust production and distribution.

But it doesn’t matter how many places you get to sell your fake jerky if you can’t produce that jerky efficiently … or profitably.

Beyond Meat tried to console BYND investors, saying last quarter would be the low point for the year as far as margins go, and that the earnings hit was “sizable but temporary.” I, on the other hand, have doubts.

Of course you do.

I mean, Beyond Meat’s “temporary” earnings slouch has been going on for years. It’s just par for the course now. Unless the company seriously gets its production side in order, this temporary earnings slouch will continue.

That said, you gotta admire the gall of Beyond posting that disaster of a report and still … still … reaffirming its revenue guidance for the full year. That didn’t stop BYND stock from cratering over 20%, but still.

See? This is the kind of confidence that leads you to create fake-meat jerky in the first place. For better or worse…

Now For Something Actually Revolutionary…

What if I were to tell you a technology (set to grow 6,500% by 2025) is about to disrupt everything? Health care, agriculture, textiles, data storage, energy…

This tech is so big … McKinsey projects it will create a $40 trillion market over the next decade. Wired magazine calls it “the Genesis Engine.” And TIME believes that by 2025, every newborn will use this tech. 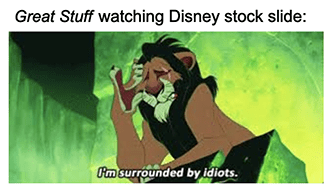 You can’t always get what you want, as Wall Street was quick to point out following The Walt Disney Company’s (NYSE: DIS) trip into the earnings confessional Wednesday night.

But sometimes, you get what you need… And for us die-hard Disney investors, we got exactly what we needed in the form of stronger-than-expected streaming subscribers to Disney+.

I can see I’m getting ahead of myself, though, so let me backtrack to the bad news … if Wall Street’s ambitious earnings expectations are what you base the entirety of your investment hopes and fears on. (Hint: We don’t.)

Now, that’s not a horrible miss by any means.

But when you’re the House of Mouse, not even legitimate coronavirus concerns shutting down access to your global gang of theme parks — and all those sweet, sweet profits — are excusable in the eyes of our institutional overlords. Hence Disney’s 2% drop today.

What’s more, Disney seems to be bucking the post-pandemic streaming exhaustion that’s plaguing many of its peers. (Here’s looking at you, Netflix…)

In other words, Disney just notched another step forward in finding the Holy Grail of high-margin, recurring revenue that streaming provides. And for that reason, we’re holding on to our DIS shares even tighter today.

Great Stuff Picks readers, we suggest you do the same. 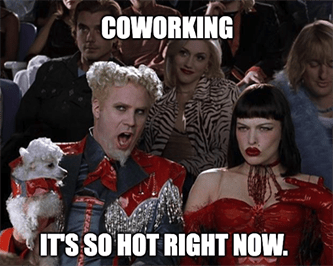 Coworking space company WeWork (NYSE: WE) has come a long way since the Adam Neumann/SoftBank saga days … and, surprisingly, is even managing to lose less money year over year.

For the first quarter, WeWork posted a loss of $0.57 per share — well below its year-ago loss of $14.34 per share in the same period. Revenue also hit $765 million, which beat WeWork’s own guidance for the quarter of between $740 million and $760 million.

These newfound strides make sense when you consider how many companies are asking employees to come back to the office … any office … so long as it means maintaining some semblance of the pre-COVID power CEOs so enjoyed.

WeWork’s own CEO, Sandeep Mathrani, hopes to capture more of the return-to-office market in 2022 and feels WeWork’s business is uniquely qualified to drive this “new era for the office.”

Honestly, so long as WeWork keeps its previous “growth at any cost” mentality at bay, it might be on to something here. Investors agreed and sent WE stock whizzing 9% higher on the day.

You ever wake up with the intention of being a real person only to get 10 minutes into your day and realize there’s literally zero chance of you leaving your house to do the “real life” stuff you’ve put off all week?

Well, alright then. For all you fully functional Great Ones out there — What’s your secret? Asking for a friend — there exists this delightful little delivery service called Instacart.

In a nutshell, Instacart is a shopping stand-in for those days you simply. Cannot. Leave. The. House. (No judgements — we’ve all been there for one reason or another.)

Since launching in San Francisco back in 2012, Instacart has blossomed into a booming business spread throughout 5,500-plus cities. It works with 40,000 different stores — from local grocers to big-name box stores like Target and Costco — to bring customers everything from grocery items to office supplies.

Umm … is Instacart giving you kickbacks or something? Get to the point!

The point is that after a long and prosperous decade of delivery do-goodery, Instacart is coming to an exchange near you. It’s IPOing, y’all. That’s the story.

Now, as you can probably tell, I like Instacart’s business model. But I also think it could’ve confidentially filed to go public at a more opportune time … like, idk, the early days of the pandemic when delivery services helped to keep the economy afloat.

In fact, with delivery demand dropping, Instacart devalued itself from $39 billion to $24 billion back in March. And while sales could surely pick up again as technology uses shift … I still think it’s risky for Instacart to IPO when people are pinching pennies over inflationary fears. 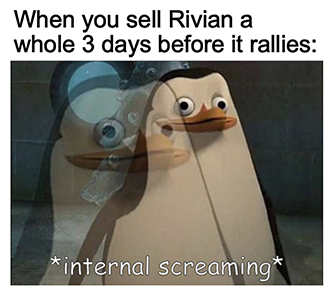 It’s like rain … on your earnings day. It’s a Rivian rip tide … when you’ve already paid. It’s the good advice that you just didn’t take … when everyone warned you not to buy speculative electric vehicle (EV) startups. Go figure.

Is that … Alanis Morissette filtering through my Great Stuff airwaves?

Yes! And if you’re a Ford (NYSE: F) investor, it also happens to be the theme song to this morning’s earnings singalong. You know … the one that saw Ford frolicking 4% into the red, while rival Rivian (Nasdaq: RIVN) rallied more than 16%?

Yeah, that one. I wonder if Ford regrets selling those 8 million Rivian shares yet … or is that “too soon” for all y’all Ford fiends?

I mean, you’ve gotta admit, the timing could’ve been better here. Three days after Ford gets fed up with Rivian, the EV maker bounces back on news of strong orders and reaffirmed future guidance.

Rivian’s sales still came in below consensus estimates thanks to deliverability issues, but for the most part, this first-quarter report wasn’t a complete train wreck like some of the others have been. And as far as Rivian’s concerned, nearly no bad news is akin to good news … or something like that.

Meanwhile, Ford’s failure to impress Wells Fargo analyst Colin Langan resulted in a stock downgrade, which Langan says is largely due to raw materials costs weighing on legacy automakers trying to get into the EV market.

Essentially, traditional EV batteries are getting more and more expensive to make. And without any major overhaul, those costs will weigh on all EV makers … from Ford on down.

That’s why we’ve been trying to tell you about this brand-new battery tech.

This battery breakthrough is being hailed as a major upgrade to EVs, and it could help with those cost-savings Langan and others are so concerned with. For more details, click here. 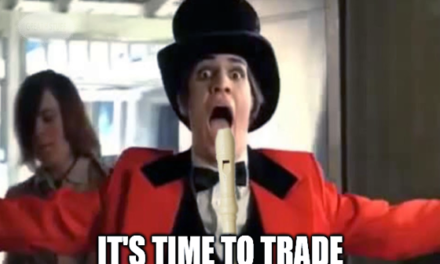 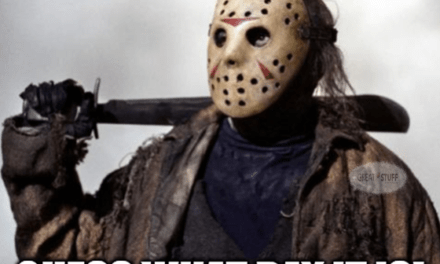 Intrinsic Snake Oil, Should You Stay Or Should You Go & Aero Song Smiths