AMZN Better Rally, or This Big Money Trader’s Out $6.5M

It’s Big Money Monday…And I got a tasty trade setup for you.Trades like these are what really excite me about this strategy.See, when you or I trade, we generally don’t make any waves. We’re a few hundred or a few thousand bucks amid a sea of liquidity.But when someone’s willing to plunk down $100k, $500k…Even a million on a single option trade?You better believe they have good reason to do so.And when those totals reach $2 million, $5 million, or north of $6 million? It’s well worth paying close attention to. Lately these trades have been just as volatile as the market. A trade early in the day could deliver a solid gain in just a few hours, but you gotta be quick on the trigger.That’s why we’ve been forced to go a bit longer-term in many of our setups over the past few weeks.But that seems to be settling out… and one bigshot trader is taking advantage of it.After the market’s latest rebound of 10% in just a couple of weeks, you may think today’s trade is bearish…Not so.This trader used the quick dip last week as an opportunity to go long, and in a BIG way.They dropped over $6.5 million last Friday on retail giant Amazon (AMZN).Let’s get into it.

How a Big Money Trade Is Built

Around 11 a.m. on Friday, my unusual options activity scanner detected a ton of activity on the May 6, 2022 $3,500 calls.One for 284 contracts at $62 a share…Another for 294 contracts at $67 a share…And one more for 284 contracts at $70 a share.All these trades were placed minutes apart… And they kept buying even as the price went up.But later in the day, I noticed something that really put some muscle behind these trades.They went in with a sweep — which means they were willing to get filled quick, even if the price wasn’t ideal. (Before they were block trades, not as urgent.)At 3:51 they wanted to add more, and quick.So they dumped another $797,000 into that same option — the May 6, 2022 $3,500 calls — 145 contracts this time at $54.99 a share.That was over $5.7 million within 10 minutes just before 11 a.m. on Friday.What happened next?Another $797k on those same calls just before the market closed.We’re talking over $6.5 million in total — the cost of a luxury mansion in South Florida — betting on AMZN to pop at least 10% over the next 30 days.That smells like conviction to me.But there’s even MORE to love about this trade…

Two of my Favorite Strategies in One

AMZN has already rallied 20% since March 8, less than a month ago. So a 10% gain in 30 days is well within the realm of possibility.But it would ALSO mean the stock rising 30% in just two months.Too much to ask for?As we look at the chart, we can see Amazon is prone to sharp moves higher like this… 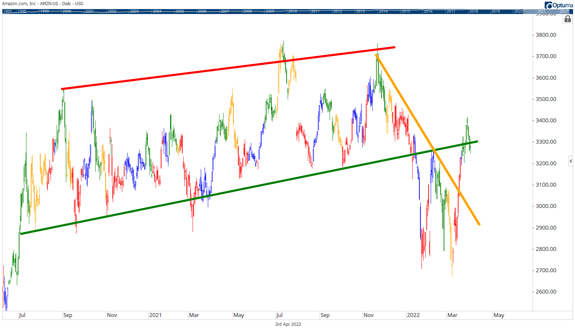 You can see the clear rising trend channel from September 2021 to the end of 2022, with the green support and red resistance.That channel formed right after the 2020 boom, where shares surged over 100% in just six months.Eventually though, prices broke down out of the channel when the market went risk-off in early January.That was a bearish move, and the stock dropped a quick 15%…Now, the stock has broken that sharp downtrend, rallied over 10%, and has at least one trader wagering a heavy sum on another rally.So, that’s already enough to get me excited about this trade. But there’s a cherry on top of all this.Amazon has a volatile event lined up for the end of the month — earnings.Amazon is expected to announce earnings right around the end of the month. That’s just before the option is set to expire on May 6.That makes this not just unusual options activity, but ALSO an earnings play. Two of my top strategies in one.While I don’t normally condone speculating before an earnings report, this is a smart way to play earnings in a volatile time like this.They bought some time, so it’s not an overnight earnings play — the riskiest way to play earnings, in my view.This trader just needs the stock to get back to $3,600 to make some money. Shares can hit that level and not even make a new high.One to keep a close eye on this month…Regards,

Chart of the Day:Gold, Stop Making Me Look Bad 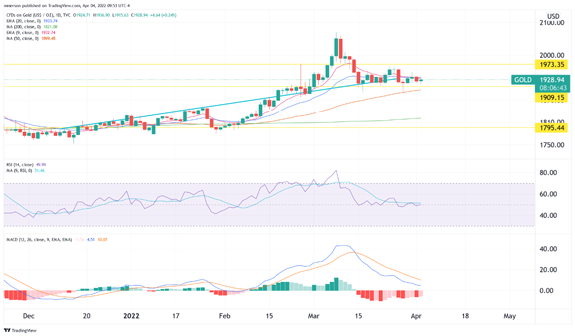 Gold bugs… what happened?You get a major downtrend break, surge toward new highs, getting me all excited…And then, THIS?Just some waffling around in Nowheretown?Okay, some background is necessary.A few weeks, back, I saw the pullback in gold prices as an opportunity to get long into new all-time highs. That, obviously, hasn’t worked out. Gold prices have gone basically nowhere since I made that call.So, what’s the next most likely move?I think UP.After that big rally, gold clearly needed a bit more time to consolidate its gains. We can see the momentum indicators are back to neutral and the moving averages are pinching closer together.The MACD, in particular, is what we want to watch. When the blue line crosses above the orange line — which we should see on the next gold rally — that will provide the signal for a more sustained move higher.For now, just watch the gold chart. I’m still bullish on new highs for the yellow metal. But you’ll do better waiting for a more solid signal.Regards, 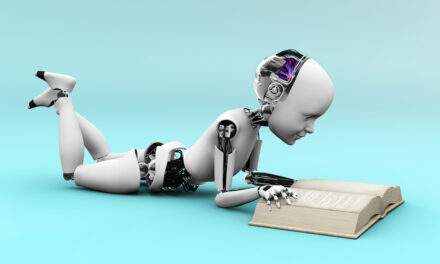 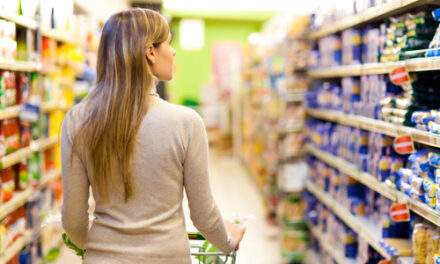 The Only Staples Stock Worth Betting On