The Reason Not to Sweat the 2018 Stock Market Drawdown

So smooth, in fact, that so far this year, the market has had one of the smallest drawdowns ever.

A drawdown is measured from any high and low during the year, indicating the maximum amount prices could have fallen in each year.

And that’s why this year has felt so smooth for the markets — there hasn’t been a sell-off.

But with a historically low drawdown in 2017, we can’t expect the same next year.

Take a look at the drawdowns each year: 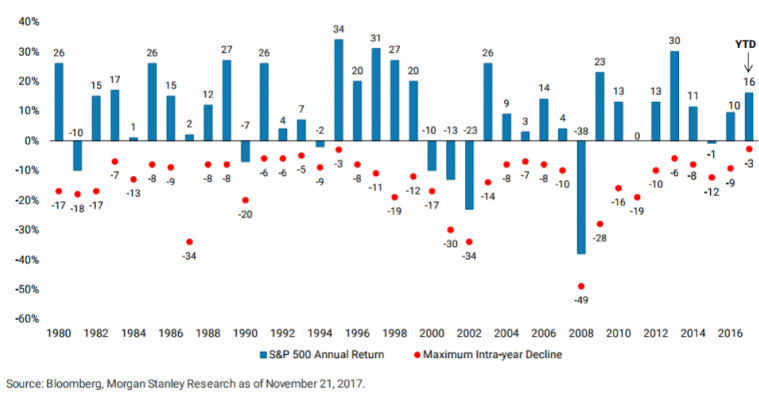 If we use 1994 as a reference, you can see that the stock market (indicated by blue bars) continued to post double-digit gains for several years after the low drawdown. But the drawdowns within each year steadily climbed (as noted by the red dots).

For next year, we can expect to see a drawdown much larger than this year’s, and that will likely cause fears of a market collapse.

No worries, though. This isn’t the start of a major bear market. Instead, it can be used as a buying opportunity.

Editor’s Note: Chartered Market Technician Michael Carr has been working around the clock every day and night for the last six months making sure that his Precision Profits research service is the most advanced trading system he’s ever developed. That’s why he’s confident he can continue to help subscribers rake in triple-digit gains in a matter of weeks or even days. Once you see how profitable Precision Profits is, you’ll stick with it for years to come. To find out how Michael’s strategy delivered a grand sum of 6,008% in winning gains, click here.