In Times of Panic, You Need a Trusted Financial Adviser

Having a trusted financial adviser can make all the difference.

Someone whose opinion you value. Someone you seek to emulate.

In the world of investing, many of us seek that person. Especially today.

The S&P 500 Index peaked on September 20. From that day to last Friday, it fell more than 9%. That’s a large drop for just more than a month.

It likely wouldn’t surprise you to learn that one sector of the S&P 500 — information technology — fell hard over this period.

It fell as much as the broader market. We’ve heard a lot about Amazon’s poor earnings report and the pullback in semiconductors.

But would it surprise you to learn one of the oldest, stodgiest sectors of the market fell 52% more than tech?

History provides us a great example of a system we can use to take advantage of this.

The market sold these bank stocks because it is worried about what will happen with interest rates.

The fact is … no one knows. We may have three rate hikes next year. Or two. Or some other number.

Despite the indecision, banks still got beat up.

There’s opportunity in this space. And I want to give you a historical example of a way to play this…

Don Powell was the 18th Chairman of the Federal Deposit Insurance Corporation (FDIC).

The FDIC is an independent agency created by Congress to help maintain confidence in the financial system.

Powell was also the CEO of the First National Bank of Amarillo, Texas.

He has decades of experience in the banking industry. This means he knows more about banking than almost anyone in this country.

Powell left the FDIC at the end of 2005. In mid-2009, just a few months after Bank of America Corp. (NYSE: BAC) stock hit its lowest level ever, the firm asked him to join its board.

So, when he reached into his own pocket to buy shares of Bank of America in August 2010, it made sense to pay attention.

You see, Bank of America stock was struggling. 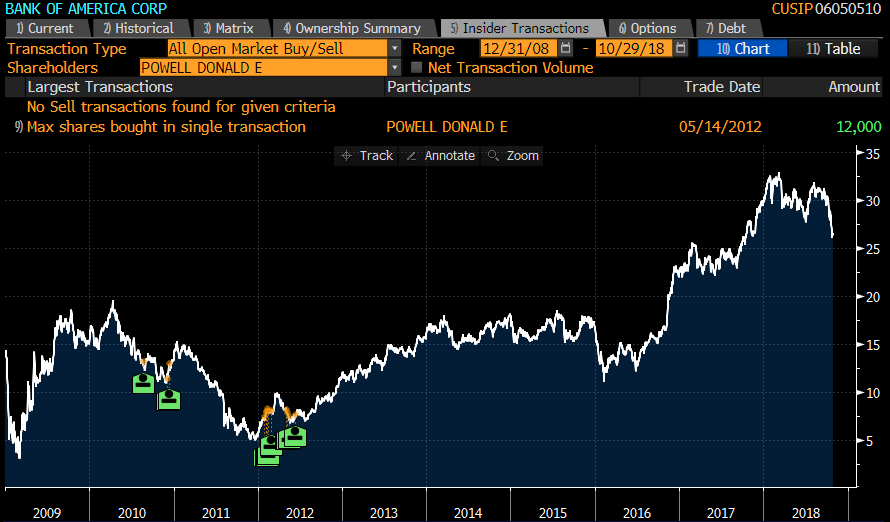 After bottoming in 2009, shares made a brief move higher. Then they fell within a couple dollars of their crisis levels.

Powell began buying during this downtrend.

The price initially trended higher after he bought, but then dipped.

Then Powell began buying again. He purchased more than 84,000 shares that year for $7.74 each.

Bank of America shares traded as high as $32.84 earlier this year.

That is nearly four times the average price of Powell’s open market buys.

These People Know What They’re Doing

There is a way to make a lot of money in the market. Follow the people who know what they’re doing. I consider these people as trusted financial advisers.

They can help you invest without even realizing it.

I encourage you to seek out trusted advisers to help you with your investing. There are some beaten-up bank stocks today that are worth buying.

P.S. The investing landscape seems to be getting more confusing each day. Wouldn’t it help to have a set of trusted advisers guiding you in your investing?

Jeff Yastine and I have developed a system to help you find stocks by following the lead of “advisers” like Don Powell.

It helps us track insider buying, then evaluate the stocks themselves. If they meet our criteria, we recommend them to subscribers.

Click here to learn more about this new service.

How to Trade Based on Inside Information — Legally