I grew up in a conservative political household.

My parents met as members of an early ‘60s organization called Young Americans for Freedom. They went on to have careers in politics and government service.

The high point of their political lives was the Reagan administration of the 1980s … the culmination of decades of effort to put a “true” conservative in the White House.

The core beliefs that defined their version of conservatism included anti-Communism, right to life for the unborn and a limited role for government.

Those were long-term goals. The issue that dominated their day-to-day political activities — and our dinner-table discussions, as I recall — was the federal government’s fiscal policy … above all, debt.

Given the behavior of congressional Republicans in recent months, it’s clear that my parents’ brand of conservatism has disappeared. The combination of unfunded tax cuts and last week’s deficit-busting budget deal worries them greatly.

It should worry you too … in fact, our irresponsible representatives in Washington are creating a perfect economic storm.

Just When Things Were Looking Better

Thanks to our representatives in Washington, we face a future of higher interest rates, a falling dollar and falling stock prices.

Over the last six weeks, Congress has added trillions of dollars to future federal budget deficits.

The Tax Cuts and Jobs Act passed at the end of December added an estimated $1.5 trillion to 10-year deficit projections. Last week, Congress and President Donald Trump added another $300 billion to that figure with a budget deal lasting until 2019.

The nonpartisan Committee for a Responsible Federal Budget forecasts that the federal deficit could hit $1.2 trillion next year.

The Congressional Budget Office forecasts a doubling of federal deficits as a percentage of gross domestic product (GDP) in the next few years, reaching as high as 7% to 8% in some estimates.

Long-term data suggests a 1% increase in the debt-to-GDP ratio corresponds to a 3 to 5 basis point rise in the 10-year Treasury yield. 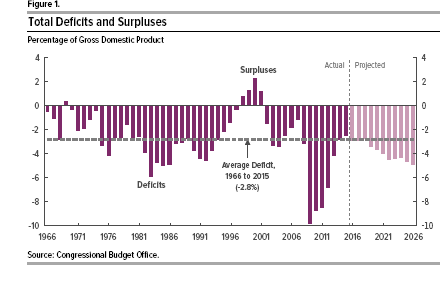 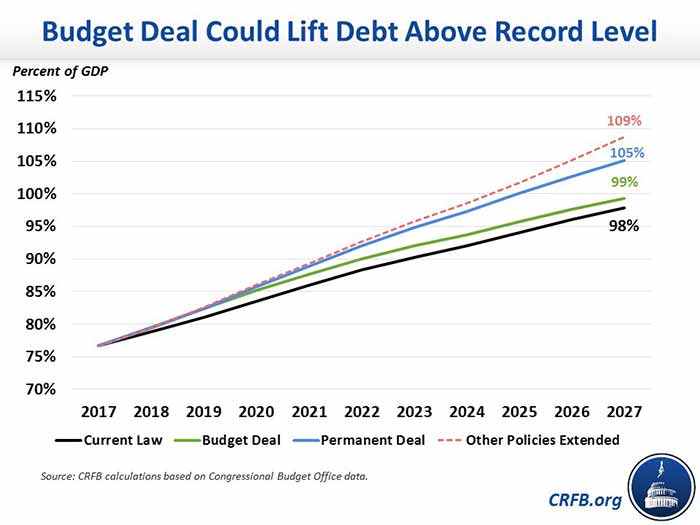 How can we be so sure of this? After all, the government has run deficits over the last decade, and we haven’t seen a rise in bond yields, right? What’s different now?

The answer is something the central bank mandarins blithely call “extraordinary monetary policy.”

In the wake of the 2008 financial collapse, the world’s major central banks stepped in to purchase U.S. Treasurys and other government debt as part of a deliberate strategy to keep interest rates low. The Federal Reserve, the Bank of Japan and the European Central Bank now hold more than $14 trillion of securities in their portfolios.

But the Fed has largely stopped buying those securities. Starting late last year, it initiated a so-called “orderly wind-down” of its Treasury position.

So, unless another source of demand for Treasurys emerges, the influx of fresh supplies of Treasury bills to finance rising deficits will create a buyer’s market. That will drive down the prices of Treasurys and drive up yields.

Projections suggest the Treasury Department will sell more than $1 trillion of debt in 2018 alone.

Washington’s fiscal irresponsibility will work through the economy in other ways, too.

The president continually reminds us that the U.S. economy is in growth mode. Employment is rising and so are wages.

In that context, a massive economic stimulus in the form of deficit spending — larger even than the emergency stimulus package of 2009 — will rapidly turn growth into inflation. Inflation will lead to higher bond yields as buyers of Treasurys factor it into their future returns.

Those higher interest rates will force the government to funnel more of its funds into ever-growing interest payments. That will leave the economy with a smaller share of federal spending, depressing growth.

Complicating matters is a weakening dollar. The dollar has weakened sharply, shedding about 10% of its value in 2017.

The combination of a weaker dollar and higher U.S. deficits will lure overseas investors looking to add to their stockpile of Treasurys. Those buyers will want bigger yields to compensate for inflation and the risk of higher U.S. debt. That will further drive down bond prices … raising U.S. government interest payments even more.

Give Me That Old-Time Conservatism

But he was talking about politics — voters of the day simply didn’t punish the Republicans for running up deficits.

The U.S. government deficits of the Reagan era were the largest since World War II, save for the immediate aftermath of the 2008 crisis.

But the current crop of Republicans who claim to venerate Reagan are on track to create the biggest deficits this country has ever seen. In the eight years since they won control of the House, the national debt has skyrocketed from $13.5 trillion to $20.4 trillion today.

Here’s the future they’re creating: rising inflation. A declining stock market. Oh, and one other thing … your taxes will inevitably have to go up to pay for it.

President Trump calls himself the “king of debt.” His courtiers in Congress certainly seem to agree.

Editor’s Note: Millions of Americans lost a chunk of their retirement accounts after the wild market turmoil last week. Fortunately, there’s a shockingly simple yet little-known way you can protect your nest egg. Plus, there are five great ways to strengthen your retirement savings without investing a single penny in the stock market. To learn some of the most powerful retirement secrets out there, simply click here now.

This Sell-Off Is Unlike Any in Market History