Last week I had dinner with an executive from a major Florida power company. His company is investing in “municipal scale” batteries. These are the giant, tractor-trailer-sized batteries that can store large amounts of electricity.

The idea is to smooth out peak power demand on the grid.

That’s because electric utilities use “time variant” pricing. That’s a fancy way to say that the price of power depends on how many people want it.

The peak time of electricity demand acts like the evening rush hour. Everyone comes home from work, lowers the air conditioning, cooks dinner, turns on the television, etc.

In New York, the state has “superpeaks” of 33,000 megawatt-hour (MWh) demand. They only last for a couple of hours but can cost $450 million per year. That’s a huge problem.

Imagine if you could pay one-third of the price for gasoline if you filled your tank at 1 a.m. I’d do it, and I’m sure you would too. However, with electricity, we don’t have that choice … yet.

According to the Energy Information Administration (EIA), air conditioning is the single largest use of electricity by residents. The house heats up during the summer, so we use the power while the sun is up.

The table below is a chart of monthly electric power production in the U.S. Each peak happens in summer. Each low occurs in late winter or early spring. 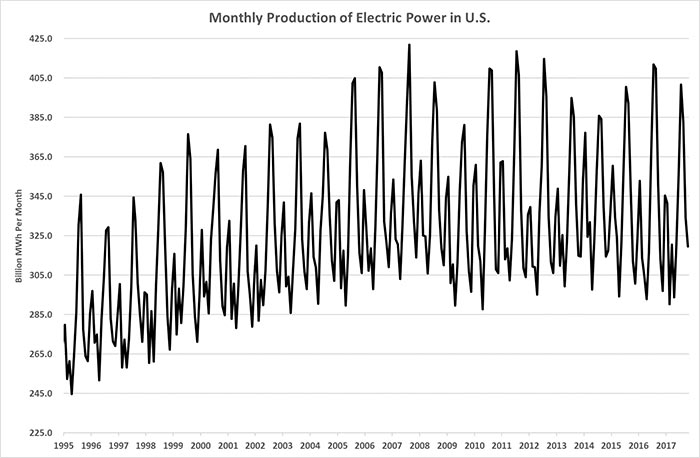 You can see the problem. We all need electricity at the same time, for the same reasons. That’s why peak power demand happens.

If demand is lumpy, then how do we smooth out supply? Batteries.

Batteries hold the promise of making electricity prices as smooth as gasoline prices. However, creating a battery large enough eluded engineers for decades. I remember, a few years ago, reading about molten sodium batteries as the leading solution.

At the time I thought: That’s a terrible idea. Sodium is highly reactive. It will explode if it gets wet. Now imagine having a superhot, explosive metal in large volumes near your town. Not ideal.

However, several technologies arrived in time to prevent liquid sodium batteries from showing up in our towns.

The first is lithium-ion. Minster, Ohio, deployed 3 MWh of lithium-ion batteries next to its 4.2 megawatt (MW) solar farm. The plan is to fill the batteries from the solar farm and use them during peak hours.

What’s interesting in both these examples is that municipal-scale batteries are already in use. This is the start of a massive transformation in our daily lives. And it will create opportunities for us to profit.

This is one of the big themes we will focus on in my Real Wealth Strategist newsletter over the next few years. The expansion of municipal-scale batteries will drive metal demand for lithium, copper and zinc.

The Fed Is Set to Repeat Errors of the 1930s