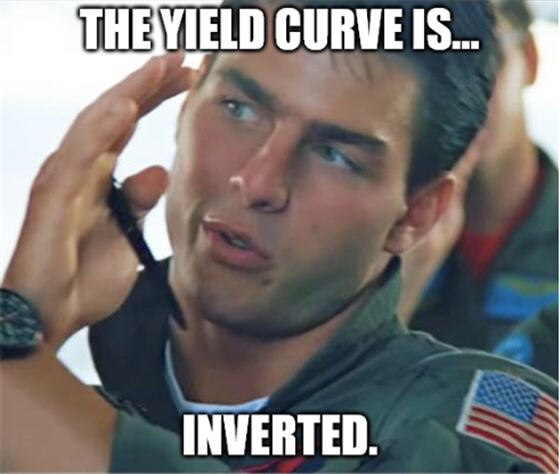 OK, class. Today, I’m going to try to learn you something.

I’m sure you’ve heard that the Dow plunged more than 800 points yesterday — its biggest one-day loss of the year. The reason for that plunge was the inverted yield curve.

You may have also heard from the financial media that an inverted yield curve has preceded seven of the past eight recessions in the U.S. That’s bad.

But why is an inverted yield curve bad? Anyone? Bueller? Bueller?

Let’s take a quick-and-dirty finance lesson to find out why.

First, commercial banks borrow money on a short-term basis from the Federal Reserve and other central banks from around the world. They then lend that money out on a long-term basis to corporations and people like you to buy capital equipment, houses, cars, debt refinancing and other things.

When those numbers are “inverted” — when short-term yields are higher than long-term yields — banks can’t make any money by lending. So they stop.

That means it’s much harder for you to get a mortgage or loan to buy that house/car you’ve got your eye on. It also makes it much harder for corporations to buy new equipment. If businesses can’t borrow, the economy can’t grow.

No loans = no money = no cash flow = recession.

This is why an inverted yield curve precedes most recessions. It’s also why the market panicked yesterday and sent stocks plunging.

The problem here is that the market sets bond yields. The Fed may seem like it has control, but that control is an illusion.

As you can see, an inverted yield curve can be a self-fulfilling prophecy.

Right now, the biggest driver for future uncertainty in the market is the U.S.-China trade war. That uncertainty is driving long-term yields lower, as investors expect the economy to weaken.

The typical response to this situation is for central banks to lower interest rates. The Federal Reserve began that process last month. However, if interest rates are already near all-time lows (like they are right now), then central banks have very little ammunition to combat an inverted yield curve.

The good news is that an inverted yield curve doesn’t always mean a recession. One day of inversion here or there doesn’t carry enough weight to force a full-blown economic recession. If this situation continues, however, all bets are off.

So there — I hope you’ve all learned something today. There will be a test next Friday. Or not … probably not. I don’t like tests. 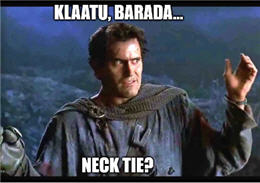 Hail to the king of retail, baby!

Walmart Inc. (NYSE: WMT) is still a retail juggernaut, even in the face of the tariff army of darkness. The company beat both top- and bottom-line second-quarter earnings expectations … but that’s not all.

Same-store sales rose a greater-than-expected 2.5%. E-commerce blew the doors off Wall Street’s projections, soaring 37% at Walmart and 35% at Sam’s Club. How do you like them apples, Amazon?

Walmart also put full-year, same-store sales at the high end of its 2.5% to 3% gain target.

So far, the retail giant is singlehandedly keeping the Dow above water today, with WMT shares up more than 5%.

The Bad: Don’t Get High on Your Own Supply 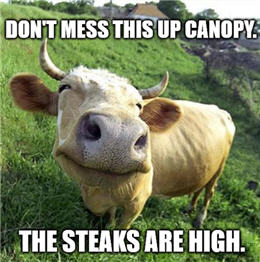 Canopy Growth Corp. (NYSE: CGC) is the latest in a string of high-profile Canadian pot companies that just can’t seem to get the ball rolling. The company posted a net loss of CA$3.70 per share, which included a CA$1.12 billion write-off related to Constellation Brands Inc. (NYSE: STZ) warrants.

Revenue for the quarter more than tripled to CA$90.5 million from CA$25.9 million last year, but fell short of expectations for CA$111.9 million.

CGC shares are down more than 7% as a result, putting the stock near its December lows.

Canopy did say it’s working on high-margin “value-added” products such as cannabis-spiked beverages and edibles, but those won’t be approved for sale in Canada until December at the earliest. 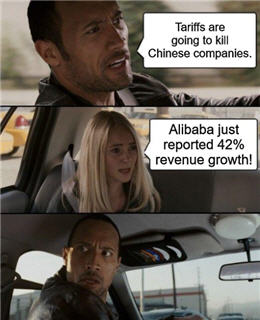 Despite tariffs and the U.S.-China trade war, Alibaba’s first-quarter revenue skyrocketed 42% to $16.47 billion. Earnings spiked 56% to $1.83 per share. Wall Street apparently lowballed Alibaba’s results, with expectations resting at earnings of $1.46 per share on revenue of $15.8 billion.

Cloud computing revenue was a major standout this quarter, surging 66% to $1.1 billion. But e-commerce remained king, rising 44% to make up 87% of Alibaba’s total revenue.

So, why is this “ugly”? Because … China. The rocky relationship between the No. 1 and No. 2 economies in the world has pressured BABA shares unreasonably. I’ve said time and time again that Alibaba doesn’t need the U.S. market to continue growing at this pace. The company’s quarterly reports prove that.

However, there’s a considerable degree of uncertainty associated with investing in Chinese companies in this market. And that uncertainty is holding BABA shares back.

Over the long term, Alibaba is an amazing investment opportunity, but you’ll have to overcome the short-term fear of Chinese stocks to realize it.

You guys are slacking off lately. The GreatStuffToday@banyanhill.com inbox is getting thin.

Send me stuff! Feed me! Great Stuff is hungry!

That said … it’s time for flattery.

I have really enjoyed reading your articles so far and look forward to seeing them pop in my inbox.

Thank you very much!

What can I say except: “You’re welcome!” Also, thank you. Great Stuff exists because you exist. It’s very existential.

Are you as hot on gold as all the gold buffs? It took five years to finally break out, so does that make for an extended move in gold now? NUGT has doubled since the breakout six weeks ago. If gold continues to move, will NUGT double again? And what does that mean for the stock market? Can they both go up at the same time?

That’s a lot of questions, and I’ve got your answers. First, for our readers, NUGT is the Direxion Daily Gold Miners Index Bull 3X Shares (NYSE: NUGT) — an exchange-traded fund that looks to return 300% of the NYSE Arca Gold Miners Index.

I just got back from the Sprott Natural Resource Symposium in Vancouver, British Columbia, last week. That crowd is pro-gold, and they were buzzing about the yellow metal the whole time.

I’m with them. I am definitely long gold. I am looking for a short pullback in the near term, but I told my readers to use that as a buying opportunity.

I’m definitely hot on gold. Gold is fundamentally a defensive asset. Short-term price movements — and for gold, that means anywhere up to 36 months — are driven by perceptions of risk in other asset markets.

Right now, those perceptions are skyrocketing. Worry set in at the beginning of June. That’s why during June and July, gold prices rose along with the stock market, which answers your question about whether they can rise simultaneously. They can, as long as perceptions of risk are rising along with stock prices.

Of course, when perceptions of risk are rising and stocks are falling, as they have been during August, gold comes into its own as a truly defensive asset, as we are seeing now.

There you have it. Two expert opinions from Banyan Hill’s gold experts.

Matt Badiali is our magic metals man. Click here to get more of Matt’s expert advice.

As for Ted Bauman … he’s the guy who can help you make sense of this crazy market and grow your wealth significantly. Click here for info on Ted’s plan for endless income.

Have you fed the Great Stuff beast yet?

Your emails are like fertilizer … or, I don’t know, something that invokes more appealing imagery.

Anyway, your opinions and commentaries are valuable and help keep Great Stuff growing. We’re sucking the marrow out of the market, after all, and that takes sustenance.

So, if you want to see your quote in next week’s edition of Great Stuff: Reader Feedback, drop me a line at GreatStuffToday@banyanhill.com. 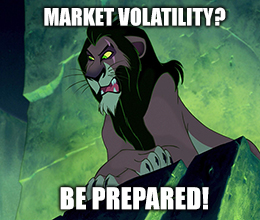