Home » Economy » U.S. Economy » Trump Is Teeing Up the Next Financial Crisis

Trump Is Teeing Up the Next Financial Crisis

Last week, the Congressional Budget Office (CBO) released its review of President Donald Trump’s proposed budget. While the Trump administration said the budget would be balanced in 10 years, the CBO found that the deficit would total $720 billion that year.

There was some good news in the CBO’s report. Trump’s budget would reduce the deficit by $3.3 trillion over 10 years. But the report seems to be using optimistic assumptions. The chart below shows the CBO’s estimated gross domestic product (GDP) growth rates for the next 10 years. 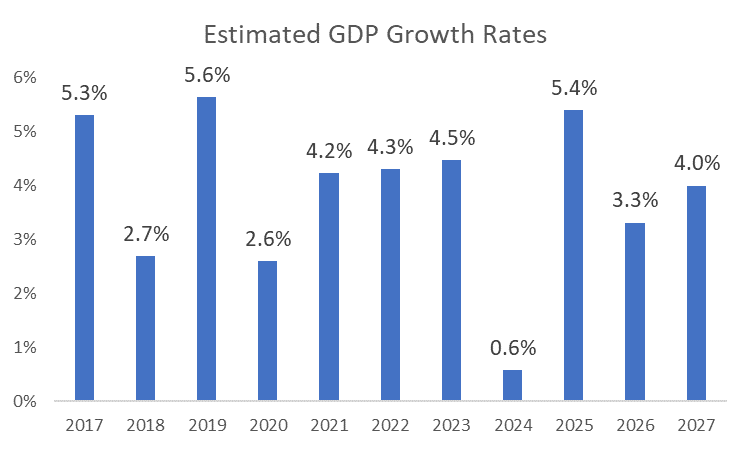 No recessions for 10 years, and growth averaging 3.9% a year. Seems like a good economy — better than the one we’ve experienced for the last 10 years.

Here’s the problem: If growth is slower than expected, the deficit will be larger than expected. This is because the government spends more to offset the suffering in a downturn as tax revenue declines.

Deficits need to be financed by issuing Treasury bonds. Investors only have so much money and will be either buying bonds or stocks with their money — not both. By ignoring the reality that a recession and slow economic growth are likely in the next 10 years, Washington increases the risks to the stock market.

The CBO knows this. That’s why it hides important data in its report. For example, it doesn’t share its forecasted growth rates. But it does give us enough information to calculate them.

Hiding data counts as transparency for the government. The fact that these numbers are hidden might just show how smart CBO officials are.

If the CBO said the economy is set to grow at 4% a year and there won’t be a recession for 20 years, everyone would suspect the report is flawed. The flaws are there; the CBO just doesn’t highlight them.

When a recession comes, expect it to be deep. There’s no way to know when that day will be, but when the selling starts on Wall Street, that will be a sign that it’s truly time to panic.

Friday’s Unemployment Report Is Likely to Be Trouble for Stocks