China Shows How to Fight a 21st Century Trade War

Trade wars made the Great Depression great. When countries needed to cooperate, they imposed tariffs. This reduced trade and increased unemployment in each country.

Tariffs are the traditional tool of trade wars. A tariff is a tax one country imposes on another country’s products.

They might serve that purpose, but other countries often retaliate with their own tariffs. Unless governments break the cycle of tariff and retaliation, a global recession or depression starts.

However, China showed there could be a better way to fight a trade war.

After accumulating $1.2 trillion in Treasury bonds, Bloomberg reported that an unnamed Chinese official hinted the country may stop buying U.S. Treasuries. China is the largest holder of U.S. Treasuries and almost holds as much as all the nations in the European Union combined. 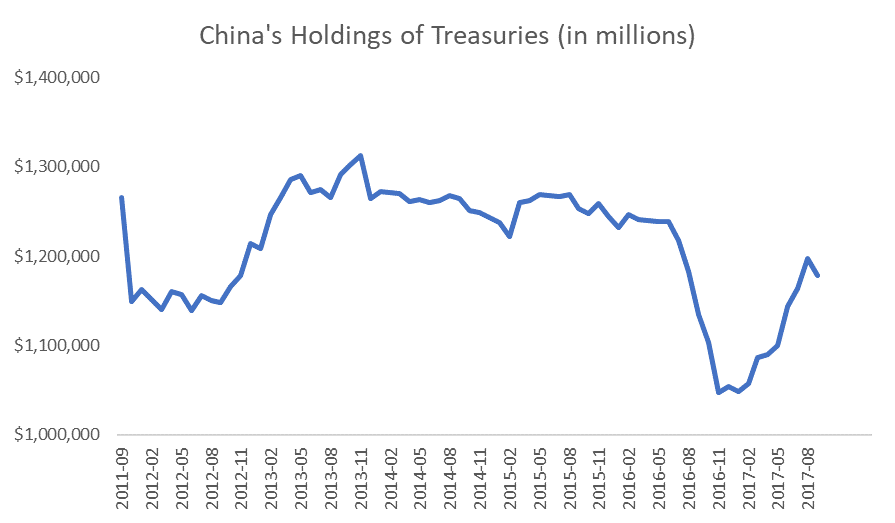 Stocks opened lower on the rumor. China holds 7.95% of the Treasury’s outstanding debt. If the country pulled back from buying U.S. debt, the U.S. would face an economic slowdown.

This threat comes as the U.S. needs to sell more Treasuries.

Tax reform is designed to increase the deficit. To finance the deficit, the Treasury Department auctions off bonds. If there is a large buyer absent from auctions, prices fall because there is less demand.

In the bond market, lower prices mean higher interest rates. Combined with the Federal Reserve’s interest rate increases, China’s action could be the trigger for the next recession.

In the current political environment, it seems safe to say the U.S. would retaliate in some way. Then, in a matter of months, a full-blown trade war would be underway.

China’s threat might just be a way to signal that it has more power than we realize. In fact, it’s possible few investors realize China could singlehandedly tank the stock market and make mortgages more expensive, which would hurt the real estate market.

But if China stops buying Treasuries, global chaos is a certainty.

The Energy Revolution Is Coming Soon to This Unlikely Destination