Trade War Between U.S. and China

As a trader, my task is to figure out what’s the story driving stocks in one direction or the other, and then determine how this narrative will play out in the future.

Right now, the elephant in the room is the tit-for-tat trade war that’s bubbling between the U.S. and the rest of the world, specifically China.

Let’s set aside the longer-term economic ramifications of a trade war: increased domestic production and decreased imports. Rather, I want to focus on key reasons why this trade war could quickly escalate as both sides play economic chicken.

On Tuesday, the Trump administration threatened tariffs on $450 billion worth of Chinese imports, leading to a 1% decline in the stock market indexes. This would amount to a tax on nearly the total value of U.S. imports from China, which was $505 billion last year.

“China has been taking $500 billion a year out of our country and rebuilding China,” President Donald Trump said during a speech in Washington before the National Federation of Independent Business. “They’ve taken so much. It’s time folks, it’s time. So we’re going to get smart, and we’re going to do it right.”

Not to be outdone, a Chinese commerce ministry spokesperson claimed they were “fully prepared” to respond to any new list of U.S. tariffs, adding the nation will use “a combination of quantitative and qualitative measures.”

This trade spat could escalate and continue longer than most people expect. If this occurs, it will not be good for markets in the near term.

Both the U.S. and China are in stronger negotiating positions than they were a decade ago.

China’s export sector no longer drives its gross domestic product (GDP), making it less vulnerable. In 2016, exports as a percentage of GDP were only 19.64%, according to the World Bank. That’s down significantly from a high of 37.18% in 2006, meaning tariffs won’t pack the same punch as years past. 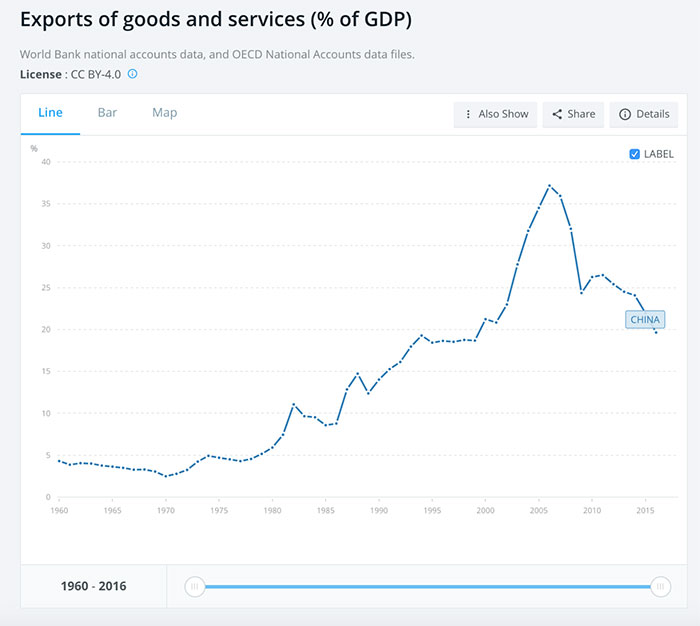 On top of that, the U.S. accounts for 18% of total China exports, meaning only about 4% of Chinese GDP is at risk in a trade spat.

In the last 10 years, Chinese middle-class yearly wages have more than doubled, making it likely that domestic consumption would be able to pick up the slack.

On the flip side, U.S. exports account for only about 12% of its GDP, the lowest share of the 35 countries of the Organisation for Economic Co-operation and Development.

Additionally, China imports 14.5%, of our exports, second behind Canada. Totaling it up, U.S. goods sold in China account for around 2% of U.S. GDP.

If there’s another reason that the U.S. won’t quickly cry “uncle,” it’s because the domestic economy is predicted to grow at the fastest pace since 2005. Economists estimate that the U.S. economy is surging at an annualized rate of over 5% for the second quarter, and could potentially hit 3% for the entire year.

That means the U.S. economy can withstand weakened growth from higher-priced imports, and provide a cushion for escalating tariffs.

With economic growth increasing and fed funds rates at 1.75%, the U.S. has a little more wiggle room on monetary policy than in years past. The Federal Reserve could cut rates back to zero to absorb an economic shock.

Fed Chairman Jerome Powell contends he’s keeping an eye on these risks. “Changes in trade policy could cause us to have to question the outlook,” he said on Wednesday at a European Central Bank conference in Portugal.

Finally, and probably most importantly, there are bombastic leaders on both sides who refuse to look weak.

While we all know about Trump’s shrewdness and drive to put “America first,” his opposition in China, President Xi Jinping, maintains a historically high approval rating and unchallenged authority within his Communist Party.

On top of that, Chinese industries are still controlled by the state, meaning that Xi will be calling the shots without much pressure from the corporate boardrooms.

In the U.S., there is a growing chorus of business leaders from retail, technology and manufacturing companies who warn the approach could hurt American consumers and companies more than the White House realized. The Trump administration will be tasked with explaining how moving production onshore will lead to increased U.S. incomes and more demand for those goods.

Both the U.S. and China maintain significant leverage to escalate and absorb the impact of a tit-for-tat tariff battle. With both sides unwilling to look weak, this means the rhetoric and policy is likely to escalate.

While we don’t know how the trade war will play out, the uncertainty around taking this battle to its climax will keep a lid on stock prices for the near future.

Editor’s Note: The Internet of Things is a $19 trillion economic force that will catapult the market to remarkable new highs … minting millionaires along the way. And if only a small portion of the $19 trillion flows toward an innovative company at the epicenter of this tech revolution, the profits will be through the roof. To find out how you can invest in this corporate pioneer today, click here.

Do You Hold the Bias That Caused the 2008 Crisis?