Foreign Investors Are Moving Into Gold

The selling pressure was blamed on the trade war between the U.S. and China.

Gold is a safe-haven asset. Investors tend to hide their money in gold when they fear what is happening in financial markets.

So, where did those who fled risky assets find refuge for their money?

Last Thursday, the European Central Bank laid out its latest monetary policy. The euro plunged, and the U.S. dollar surged.

Typically, a stronger dollar will push down the price of gold. And on Friday, when the U.S. announced a 25% tariff on $50 billion worth of goods imported from China, the price of gold plunged.

There was heavy volume in Friday’s gold sell-off. It suggests lots of the “big money” are worried a trade war could cause the U.S. dollar to spike.

However, despite all the uncertainty, the U.S. is in a good position — from a growth, policy and trade balance perspective — to handle a trade war.

That’s likely going to draw capital to the United States.

It could start to look like an “America first” flight to safety. If money rushes into U.S. Treasurys and even U.S. stocks, it likely supports the value of the U.S. dollar.

In that scenario, gold would struggle to win any safe-haven appeal.

But that’s not the most likely scenario.

When investors are fearful, they’re not going to be dumping money into U.S. stocks. But they will consider gold.

Investors outside the United States became worried before this latest trade skirmish resurfaced. That’s because growth, debt and capital flow in Europe, China and emerging markets are far less stable than in the U.S.

May marked the third consecutive month of inflows into European and Asian gold-backed exchange-traded funds (ETFs). 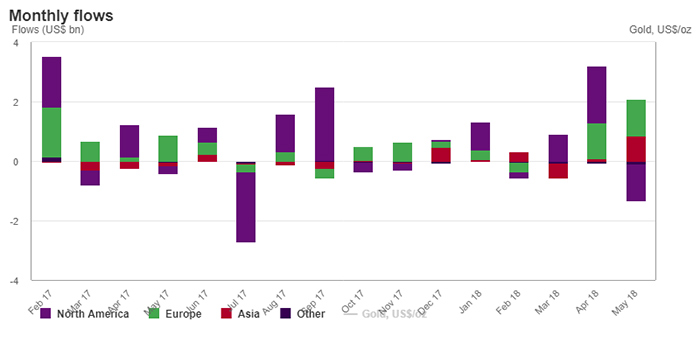 Money flowed into North American gold ETFs in March and April after stock market volatility spiked. But those flows reversed in May.

Last month, I laid out some reasons why gold will be in demand during the second half of the year. And if U.S. investors begin to fear the outlook for stocks again, they’ll turn to gold ETFs in a big way.

We could see a repeat of 2016, when inflows into gold ETFs surged and the price of gold jumped by 26% in six months.

There is plenty of money to be made from a move like that.

If you’re looking for exposure to gold with a simple ETF, the largest U.S. gold ETFs are the SPDR Gold Shares (NYSE: GLD) and the iShares Gold Trust (NYSE: IAU).

But there is a newcomer on the scene. The GraniteShares Gold Trust (NYSE: BAR) launched last year, and it boasts a lower expense ratio (0.20%) than GLD and IAU. That’s why BAR is already winning some market share from its peers. 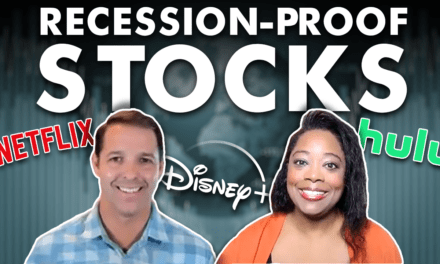