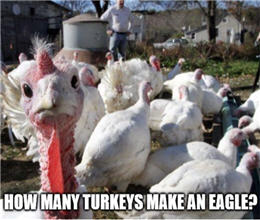 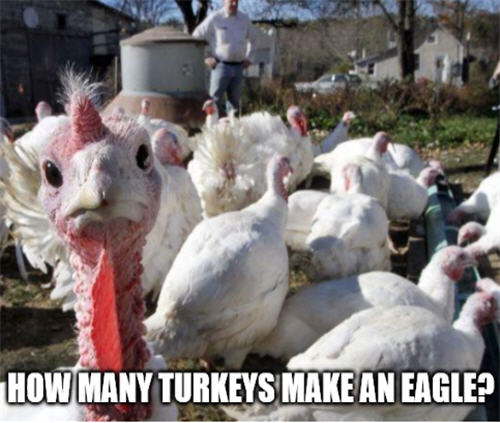 I know my brain doesn’t work quite right. I wouldn’t be writing Great Stuff if it did.

Today, I’m left with a burning question on AbbVie’s $63 billion cash and stock acquisition of Allergan.

It’s not about the viability of the combined company. Both AbbVie Inc. (NYSE: ABBV) and Allergan PLC (NYSE: AGN) face serious questions about how they move forward as generics and biosimilars begin to threaten their blockbuster drugs.

It’s not about AbbVie’s promise to “deliver on our mission to patients and shareholders” or to “achieve unique and complementary strategic objectives” … whatever that means.

This is a question we all need answered: If not two turkeys, how many?

Is there a number of turkeys you could combine and get an eagle?

There are several eagles on the endangered species list that could benefit from this knowledge immediately.

Unless the number of turkeys needed is in the millions, there are more than enough turkeys to go around to help out with the cause, presumably.

Also, are Americans willing to sacrifice Thanksgiving dinner for the survival of the American Bald Eagle?

OK, back to reality. I make fun, but Mr. Raymond makes a solid point … albeit with questionable math involving turkeys. Still, it adequately conveys the absurdity of the buyout.

AbbVie makes the biggest drug in the world by revenue: Humira. Humira treats a wide range of aliments including psoriasis, arthritis, Crohn’s disease, ulcerative colitis … the list is truly staggering.

But biosimilar drugs are beginning to hit the market in Europe now. Humira will face a similar fate in the U.S. in 2023.

Allergan faces a similar fate with Botox, a drug/treatment that made up about 24% of the company’s total net revenue in the first quarter of this year. What’s more, Allergan was facing so much potential pressure from biosimilar drugs that analysts were speculating the company would split up.

So, you have one company struggling with competition buying another company in a similar situation. Can a combined AbbVie/Allergan “achieve unique and complementary strategic objectives”?

That remains to be seen. Investors should hold off for now on investing in the combined company — no matter how many turkeys they attempt to combine.

By the way, if you want the real inside scoop on which pharmaceutical or biotechnology companies to invest in, click here.

The Good: Get Yer Grub

Hungry, but don’t want to leave your couch or take a break from the game? Grubhub has you covered. And, apparently, it’s delivering better than its competitors.

Citi Research analyst Mark May upgraded the stock to buy this morning with a $91 price target. That’s nearly 20% above GRUB’s current price.

Now, May got into a lot of analyst jargon such as “driver efficiencies” and “ops & support margin” and “4Q19 EBITDA/order guidance.”

Basically what he’s trying to say is that Grubhub will hit its earnings targets, it will continue to bring in more money and the company is doing this better than its peers.

One of the hottest stocks of 2019 was just given a reality check. Shares of Shopify Inc. (NYSE: SHOP) were smacked with a downgrade to neutral this morning at Wedbush.

Adding “ify” to the end of a capitalist cornerstone will only get you so far, apparently.

The ratings and research firm also cut its price target to $270, below SHOP’s current price.

According to Wedbush, it really likes Shopify, its prospects and the strong growth potential in the online retail market. However, SHOP shares are overvalued, it says.

This kind of downgrade was coming eventually. SHOP is up more than 116% so far this year. But investors shouldn’t fret too much. Shopify is still averaging revenue growth of more than 40% a quarter.

If you’re a FedEx Corp. (NYSE: FDX) investor, I feel a bit sorry for you right now. The company has more issues than packages this week.

FedEx just dumped one of its biggest customers in Amazon.com Inc. (Nasdaq: AMZN), is facing a blacklisting in China after delivery errors and is suing the U.S. federal government over regulations.

And we haven’t even gotten to earnings yet — which arrive after the close of trading today.

There are indications that the stock could bounce back on a strong earnings report. EarningsWhisper.com puts the whisper number at $4.95 per share, above Wall Street’s target.

Miss that target, however, and this could just be the beginning of FedEx’s woes.

SpaceX’s Falcon Heavy carried seven major experiments into space that will affect the markets and mankind in the next few years. Enjoy the space nerd stuff!

Whatever you think about Elon Musk, SpaceX is pioneering the true next frontier. This is one mega trend I’m looking forward to investing in directly.

The only real way to get in right now is indirectly via companies in the defense sector or exchange-traded funds (ETFs) like the iShares U.S. Aerospace & Defense ETF (BATS: ITA).

It’s not the buying, per se — I actually like new cars. It’s the whole entire process.

The back and forth on the price. “Checking” with the manager. Adding new “features” at the end such as warranties, fabric protection and alien repellant. The list goes on.

When my wife and I bought our first car together, we arrived at the dealership with a budget in mind at 8 a.m. We didn’t leave until after 6 p.m. that day.

It’s worse than a root canal. I’d rather be buried up to my neck and covered in honey near a fire ant mound than buy another car the “traditional” way.

But CarMax Inc. (NYSE: KMX) … that’s different. One price, no haggling — either you can afford the car or you can’t. Period.

In and out in less than two hours. That’s worth investing in.

My family has bought our last three vehicles from CarMax, and we won’t go anywhere else. It’s just a waste of time.

And I’m not the only one who thinks so. In the first quarter of 2019, CarMax saw a 9.5% jump in comparable store sales, well outpacing Wall Street’s expectations for just 5% growth.

Part of the allure for repeat customers is the online shopping component. You can find the exact car for the exact price you want before you even walk onto the lot. This is a dream occurrence for anyone who’s bought cars from a dealer or anywhere else before.

It’s been a boon to CarMax’s revenue and earnings as well. Earnings growth has averaged roughly 6% in the past year, while revenue is projected to grow by the same rate for the next two years.

What’s more, despite the “retail apocalypse” and massive store closures in the retail space, CarMax is opening 14 new lots this year.

The combination of online shopping and easy car buying will continue to disrupt a market that seriously needs more alternatives. But CarMax is really the only game out there right now, meaning that the company’s growth potential is considerable. 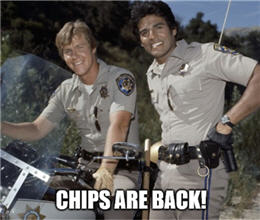