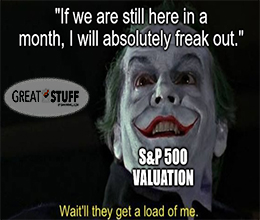 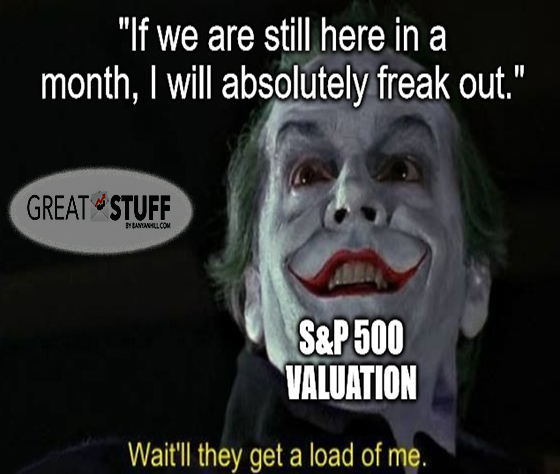 I know you’re all probably tired of GameStop (NYSE: GME), AMC Entertainment (NYSE: AMC), silver and the lot. But I read something this morning from Bloomberg columnist Matt Levine that got me thinking.

A dangerous pastime, I know.

Great Ones, consider this our Quote of the Week and my last word on the topic as we go once more into the breach:

But I tell you what, if we are still here in a month I will absolutely freak out. Stock prices can get totally disconnected from fundamental value for a while, it’s fine, we all have a good laugh. But if they stay that way forever, if everyone decides that cash flows are irrelevant and that the important factor in any stock is how much fun it is to trade, then … what are we all doing here?

Seriously … what are we all doing here?

For the past week, I’ve watched Wall Street lose its ever-loving mind over GameStop. The cries of “valuation!” and “price manipulation” still echo across the Street. And they’ll probably continue to echo for some time.

Those cries are correct: GME is not worth $300 per share. It’s probably not worth the $95 it traded for at the time of this writing. Even the most favorable estimates put GME at $47, and that’s if the company’s turnaround plan goes well.

Since hitting a high near $483 last week, GME literally plummeted 80%. And, while I’d argue that this is a good thing from a valuation standpoint, I’d also point out that this is what happens when trading platforms like Robinhood severely limit trading on a stock.

I mean, where would any stock not owned by an index fund or ETF be if every trading platform suddenly limited access? Trashed demand? But I digress…

It’s obvious that GME’s case is an outlier. A pump-and-dump scheme cooked up by a bunch of unruly retail investors on an internet message board. Or is it?

Maybe GME is merely an exaggerated microcosm of the market as a whole. For instance, the S&P 500 Index trades at all-time highs despite extreme unemployment and slow economic growth. Kinda reminds me of GameStop’s business model.

What’s more, the S&P 500’s price-to-earnings (P/E) ratio of 39.04 is currently the third-highest reading ever taken! To put that in perspective, the S&P’s P/E ratio historically trends in the 14 to 15 range. We’re more than double that now and quickly approaching triple.

Wanna guess when the S&P 500’s P/E ratio was higher than it is now?

In 2001, just before the dot-com bubble popped, and in May 2009, right before the financial collapse. That’s rarefied territory. That’s scary territory.

And one more thing … earnings for S&P 500 companies aren’t rising like the financial media narrative tells you. Sure, they’re beating lowered analyst expectations, but earnings aren’t rising. Just check out this buried tidbit from a recent FactSet report:

And this one from the same report:

If -2.3% is the actual decline for the quarter, it will mark the fourth straight quarter and the seventh time in the past eight quarters in which the index has reported a year-over-year decline in earnings.

Does that sound like the S&P 500 should be at all-time highs?

Now, I know the S&P’s valuation is nowhere near the same league as GME’s. But, if you’re gonna scream “valuation!” on GME, someone’s gotta look at the market as a whole and have the same reaction.

If GameStop trading above $300 one month from now is reason enough to “absolutely freak out,” why is no one absolutely freaking out about the S&P’s all-time highs?

Correct. Essentially, the Federal Reserve is the S&P 500 equivalent of GameStop’s hordes of “diamond hands” retail investors. What are we all doing here, indeed?

I guess we’re just lucky that companies like Robinhood can’t limit the Fed’s “trading,” or the S&P 500 would face similar consequences right now.

What do you think, Great Ones? Put on those analyst hats! Is GameStop’s exuberance a metaphor for the bigger market’s stalling growth? Have you been “absolutely freaking out” about the valuation conversation this whole time?

Better yet: Did you get in on the supposed “retail investor revolution” last week … with gains to show for it?

And don’t forget … the tax man watched you bring home those GameStop tendies with anticipation! You need to prepare now to protect those tendies — er, gains — and get your butts ready for tax season.

If you slept through my tax time wake-up call yesterday … this is for you. Taxes … they’re a-comin’! Don’t think Uncle Sam forgot about you while you were sticking it to the Robinhood man…

And don’t think I forgot about you when it comes to tax prep. Check this out: It’s a proverbial “Tax Bible” on countless ways you could slash your taxes this year, next year and the year after that. But don’t wait too long, because tax season will be here before you know it.

Click here to learn more and protect those tendies ASAP!

The Good: All UPS From Here?

A shipping company blowing out earnings during a pandemic lockdown? Who’d have thought?

Revenue shot up 21% to reach $24.9 billion, beating the estimate for $22.87 billion. Bottom-line earnings also surpassed expectations. Per-share earnings came in at $2.66, well over the $2.14 expected. But everyone’s eyes hover around how much UPS actually shipped.

Package volumes ratcheted up 28% for UPS’ smaller customers, while they rose about 4% for the company’s biggest shippers … aka the almighty Amazon.com (Nasdaq: AMZN). In fact, Amazon made up 13.3% of UPS’ total annual revenue in 2020, 1.7% higher than the year prior.

Eventually, Amazon is going to shake its addiction to UPS’ shipping. But until then, ol’ Brown is going to milk it for all it’s worth … and then some. 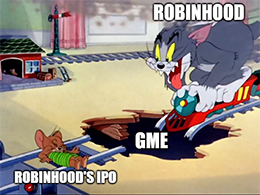 I’m not talking about the “diamond hands” crew — they’re getting pounded today.  No, fintech giant Square (NYSE: SQ), of all companies, is relishing the Robinhood exodus like no other.

Retail traders are leaving Robinhood in droves, heading for Square’s multifeatured Cash App beacon. Did you know that Cash App offered stock trading? Now you do.

A recent survey by Mizuho Analyst Dan Dolev found that 40% of respondents already jumped ship from Robinhood to the Square side.

Turns out, bad optics for Robinhood is a boon in Square’s pocket. SQ stock is up nearly 13% since the great Sherwood Forest exodus. 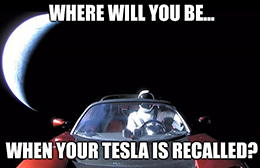 Total recalls are never anything but “ugly,” unless you’re Arnold Schwarzenegger, that is.

The problem? Touch screens with a touch of memory loss.

According to reports, Tesla touch screens can fail when a critical memory chip runs out of storage.  Now, I’ve had my fair share of highway arguments with Bluetooth … I’ve gotta have my tunes on the road, or I’m drivin’ and cryin’. But touch screen issues are where I draw the line.

These specific failures can lead to problems with defrosting, turn signals and driver assistance … i.e., everything you decidedly do not want to fail while hurtling down ice- and snow-filled roads.

But fortunately — or unfortunately, depending on which side of the valuation coin you fall — TSLA investors don’t find this recall particularly ugly.  A recall like this would have any stock in any other major automaker tanking hard. But Tesla? No biggie.

The stock is up more than 4% today because … why not?

Great Stuff: Now That That’s Out of the Way…

Great Ones, I didn’t just bring you here today for another chance to talk Tesla and groan about GameStop. No, I admit there’s an ulterior motive here. You might’ve guessed it already if you’ve written in to us before…

Just two days from now — count ‘em down now — we’re diving headfirst into the meat of the market matter. All those emails you and your fellow readers have sent our way!

This week, the inbox is overflowing, but there’s always room for you to share your take. We want to know what you think about the latest market madness and mayhem — the whole debate about valuation shmaluation, market hype and social media-driven gains (rocket emojis included).

Send a quick memo to GreatStuffToday@BanyanHill.com and let us know what you think of short squeezes, the last legs of mall-based retail or whatever else you have on your mind. 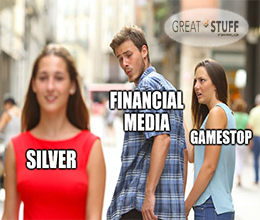 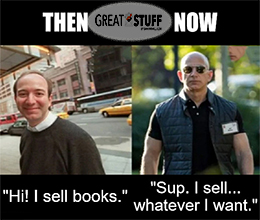