The Internet Is on Pace to Dethrone TV by 2020

The transition from TV to internet has been huge over the years.

After all, with the internet, you have access to anything you could possibly want, anytime. So it’s no surprise that people are now spending almost as much time looking at computers as televisions.

A lot of people also rely on the internet for their jobs. Anyone with an office job in today’s world is going to be constantly connected to the internet. For many people, it’s impossible to avoid.

That’s why, in less than a decade, time spent on the internet has gone up over 200%. 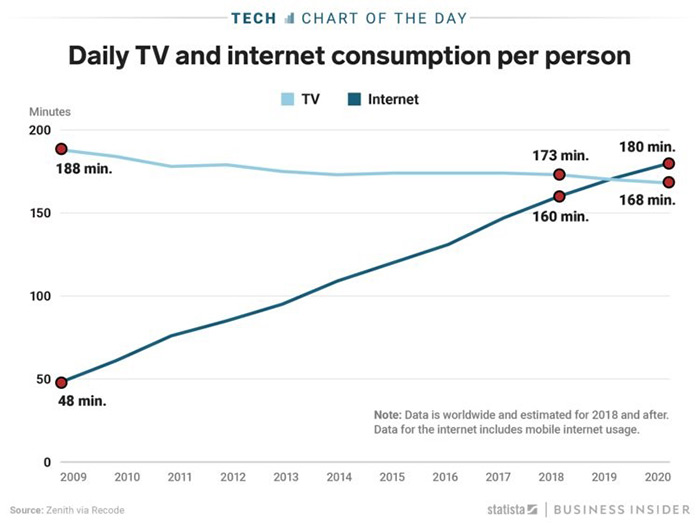 And people are not only using this time on their desktops and tablets. This time includes mobile devices as well.

Things like social media, as well as streaming video services such as Netflix and Amazon Prime, have played a part in this transition as well. Everyone always has their phone with them, giving them unlimited access to the internet.

And even if you want to watch “normal” live TV, there are plenty of apps that give you access to the same content.

DirecTV, Sling, PlayStation Vue and any major sports network have mobile apps that can stream live shows or games to your phone.

But this massive switch in the way people are living gives rise to a budding industry. Mobile/internet security is now in more demand than ever before.

The thing with conventional TV was that you were never in danger of getting a virus. But anyone can hack into an internet-connected device and steal information.

So, a good way to profit from this transition is to buy the ETFMG Prime Cyber Security ETF (NYSE: HACK). This exchange-traded fund holds a lot of the top cybersecurity stocks out there today. And while the market has struggled this year, HACK is up over 15%.

This Controversial Sector Will Spawn the Next Starbucks