Back in early May I said one group of unloved stocks “hit a rare milestone” leaving them severely undervalued.

But I added this same sector was “about to swing back into favor” and “a great opportunity for contrarian-minded investors.”

It sure didn’t take long.

That group of stocks — consumer staples companies like Procter & Gamble, Campbell Soup and others — is among the best-performing sectors over the past one- and three-month periods.

The exchange-traded fund (ETF) I recommended, the Consumer Staples Select Sector SPDR ETF (NYSE: XLP), did well as a result since that date. 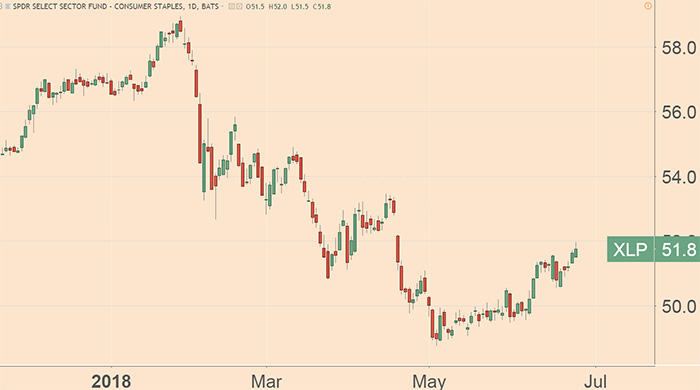 But what was the “rare milestone” that I said was the trigger for this opportunity back on May 8?

However, every so often, Wall Street diverts its attention to greener pastures, like the tech sector. When that happens, consumer staples companies get bounced out of a great many institutional portfolios.

But these big firms, most of them with operating histories going back many decades, still pay their dividends. As their stock price declines, the dividend payouts — relative to the price of the stock — become so juicy that value-minded investors step in and buy.

For the XLP ETF, I noted in my May 8 article that its dividend yields only hit 2.75% or higher four other times in the past decade before a rally took place…

Now we can add a fifth instance. As it turns out, the XLP ETF’s dividend yield topped out on May 3 at 2.98% — with the fund now up 5% in value since that date.

And we have one consumer staple stock in the Total Wealth Insider portfolio that’s nearly tripled that advance in the same time frame.

How much higher could the XLP ETF go from here? Going by historical extremes, I think at least another 10% to 15% between now and September.

Wall Street is a fickle taskmaster.

Between January and early May, convinced that consumer staples companies had little to offer their portfolios, selling by institutional investors pushed the XLP ETF down by 16%, while individual stocks suffered even more pain. General Mills’ stock lost 30%, while Procter & Gamble dropped about 20% in the same time period.

But then something happened to remind Wall Street why these stocks have been around for many decades.

They may be slow-growing and, frankly, boring compared to the tech sector. But when you experience the carnage of mutual funds all rushing out of the same small group of high-performing tech stocks since last week — Netflix (down 8%), Facebook (down 4%), Intel (down 6%), etc. — the pain of enduring those sharp losses is usually reminder enough.

The Internet Is on Pace to Dethrone TV by 2020