Forecasts are hard to make. But profits tend to rely on forecasts.

For a small business, it’s important to forecast well. If there are too many customers and not enough inventory, the business can fail. Too much inventory can also lead to failure. Hiring plans and inventory depend on future expectations.

Owners might get it wrong, and surprises are expensive. So, they work on getting forecasts right. It’s simple. Too many errors and a business fails.

Watching trends in forecasts can help us forecast stock prices.

Business owners are increasingly pessimistic. Optimism has been declining for two years. 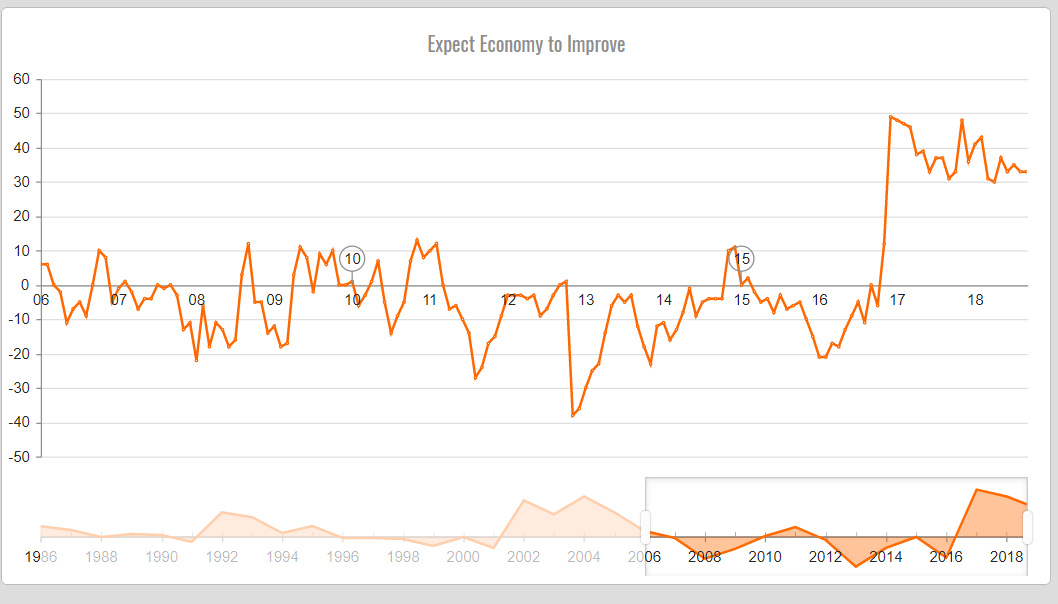 The chart is based on a National Federation of Independent Business (NFIB) survey. Every month, it asks 12,500 members about business. It’s a leading indicator of the economy.

NFIB asks if owners think the economy will be better in six months. The chart shows the difference between optimists and pessimists.

The current value of 33 indicates 33% more small business owners think the economy will be better. About two-thirds are upbeat. A third are worried.

Small businesses are the leading edge of the economy. They operate with small margins for error. Overly optimistic forecasts can ruin a business.

They could end up with too much inventory. Or too many employees.

Survival requires a bias toward pessimism. That explains the decade of pessimism in the chart. Most owners were pessimistic from 2006 until late 2016.

It peaked the month after the presidential election. The recent downtrend is cause for concern. The number of optimists fell from 74% a year ago to 66% today.

The trend is moving in the direction of many other economic reports. Downtrends in data point to economic weakness.

That means lower strike prices. And now is the time to prepare for a bear market.